As children, we were all told fairy tales – mostly by our grandparents. Fables, mythology, ancient history – Indian children have grown listening to them as bed time stories. Some people though, who have a knack for being clubbed as the super-elite intellectual class of Indians, have not been able to get out of their childhood. These people who love making a joke out of themselves are living a life where the world is a Lalaland and all that they believe in politically, is true. It is no coincidence that all such people today are liberals, leftists and Islamists. And they have found a new purpose in their lives.

This purpose is to fabricate taxi drivers’ stories when they are not true, and share them verbatim if they are. Taxi drivers have become the repository of all truth, and mind you, these people are a chatty lot. Almost every other taxi driver a liberal, leftist or Islamist gets their hands on, turns out to be a man who is politically motivated, and whose views almost always incline with those of their passengers.

Take the case of Noman Siddiqui, who is an ex-NDTV employee and currently works for Barkha Dutt’s Mojo. This clown of a man on Wednesday, shared a saga on Twitter. He said, “Cab driver in Delhi saw my name, thankfully didn’t cancel the rise. Told me he’s from UP “waha pe Musalmano ko tight karke rakhsa hai, aapke logo ko waise iss desh se chale jaana chahiye, kyu itni beizzati she rahe ho.” I am still thinking of an answer, numb!” First, Siddiqui deleted his tweet. He then deleted his account. 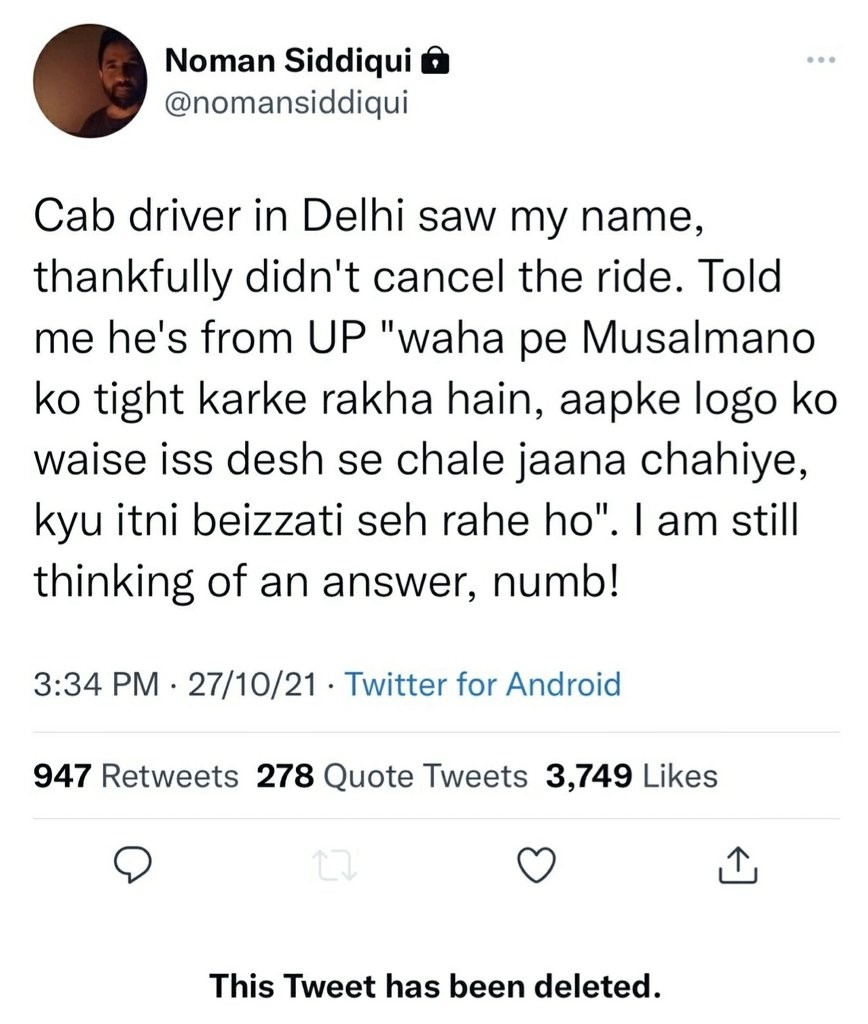 Here’s the thing. Most of the times, these conversations between liberals and taxi drivers turn out to be fake. Even if they are not, nobody really cares. For liberals however, a taxi driver agreeing to their political views is nothing short of a eureka moment, which they take to sharing instantaneously. Part of the problem with liberals and Islamists is that they know they are insignificant, and they don’t matter. So, in order to provide credence and weight to themselves, these individuals share their cabbies’ views on Twitter, hoping that the same will help them hog the limelight.

Kaushik Basu is a man who has innumerable taxi driver tales to tell. The man could practically write a book for all the times his cabbies have engaged in riveting conversations with him and left him spellbound. Recently, Basu had tweeted, “Wonderful Sikh taxi driver in New York today—he spoke about the tragic treatment of farmers in India, & in detail about how the new farm laws hurt farmers. He got lost getting me home & when he refused to take money for the detour, I realized the detour was to complete his speech.”.

Among other prominent ‘intellectuals’ who have shared their cab stories on Twitter are Rajdeep Sardesai, Rana Ayyub, Arfa Khanum Sherwani and others.

Wonderful Sikh taxi driver in New York today—he spoke about the tragic treatment of farmers in India, & in detail about how the new farm laws hurt farmers. He got lost getting me home & when he refused to take money for the detour I realized the detour was to complete his speech.

My Ethiopian taxi driver took a roundabout route, assured me he would not charge for the diversion & stood by that promise. We were chatting all the way about Ethiopia.
I am now convinced his sole motivation for the route was to prolong the conversation. I learnt a lot. Thanks.

The drivers can see your name when you book, and Rana Ayyub isn't exactly a non-Muslim name. Unless you had mistakenly created your profile in the name of Shah, after having smartly created an international career out of it. pic.twitter.com/g0ftSBRrMG

Now, a Thane taxi driver is beaten up and forced to chant Jai Shri Ram. How many more hate crimes before we act sternly against this madness? And don’t give me crap of ‘selective’ outrage: ALL crime driven by religious hatred must be condemned, not condoned. Bahut ho chuka!

My taxi driver in Dubai tells me: I am from Multan, you from Mumbai. You are Indian,I am Pakistani,but our blood is the same. Only history and politics has divided us,can we not ask our netas to stop the khoon kharaba? I gave him a hug! आम आदमी कीं सोच ख़ास आदमी से बड़ी होती है!

But here’s the thing. The blame must ultimately fall on cabbies as well. Why on earth are they so chatty? Their job is to drive a person from one point to the other. And then, conversations need not be political in nature alone. Yet, if the bloodbath of cabbie stories on Twitter is anything to go by, it’s almost as if every taxi driver in India is a budding politician willing to take down the Modi government at the drop of a hat. Are they UPSC aspirants? Are they administrators-in-waiting? If not, why are they so enthusiastic about sharing their political views with a person who just wants to travel from one point to the other?

It seems that taxi drivers are fast emerging as the most concerned of Indians, who cannot help but share their anguish with just about every passenger who hops into their cars. And if this is not the case, cab providers like Ola and Uber should come out in the open and clarify whether a said conversation has taken place between one of their drivers and a liberal claiming so on Twitter. That will set the record straight, and probably expose liberals and Islamists as a bunch of foolish liars.

Sajjan out, Anita in: Trudeau reaches out to India with the entry of Anita Anand as Defence Minister