HOME » Politics » Trending » Biplab Deb is a simple man. He sees TMC goons. He gets them bashed up

Biplab Deb is a simple man. He sees TMC goons. He gets them bashed up

If one dares to become an impediment or thorn to Mamata Banerjee or Trinamool Congress, one is almost certain to face grave consequences. However, Tripura is here to give it back to both Mamata Banerjee and the TMC goons.

TMC goons bashed up in Tripura

Reportedly, on Friday, Trinamool Congress MP Sushmita Dev’s car along with a campaign vehicle was allegedly attacked by unidentified assailants and vandalised in Agartala city. After the attack, Sushmita filed an FIR and asserted, “The perpetrators vandalised vehicles, physically assaulted workers of the TMC and outraged the modesty of the female party workers. This was accompanied by theft of property including mobile phones belonging to supporters of the party.”

The TMC leaders tried to make an opportunity of it to target the BJP government. TMC MP Abhishek Banerjee asserted “Under @BjpBiplab ‘s #DuareGundaRaj, attack on political opponents is setting new records! Physically manhandling a sitting female Rajya Sabha MP, @SushmitaDevAITC is Beyond Shameful & Political Terrorism by @BJP4Tripura goons! The time is near. People of Tripura will answer!”

The TMC workers have been adopting various measures to spread hatred and bigotry. A few days back, a picture with a political cartoon circulated on social media that displayed a woman in a white saree with a blue border (resembling Mamata Banerjee) crushing three people, Prime Minister Narendra Modi, Home Minister Amit Shah and one civilian with her foot. With such a demeaning picture, the TMC goons seemed to normalize the violence. 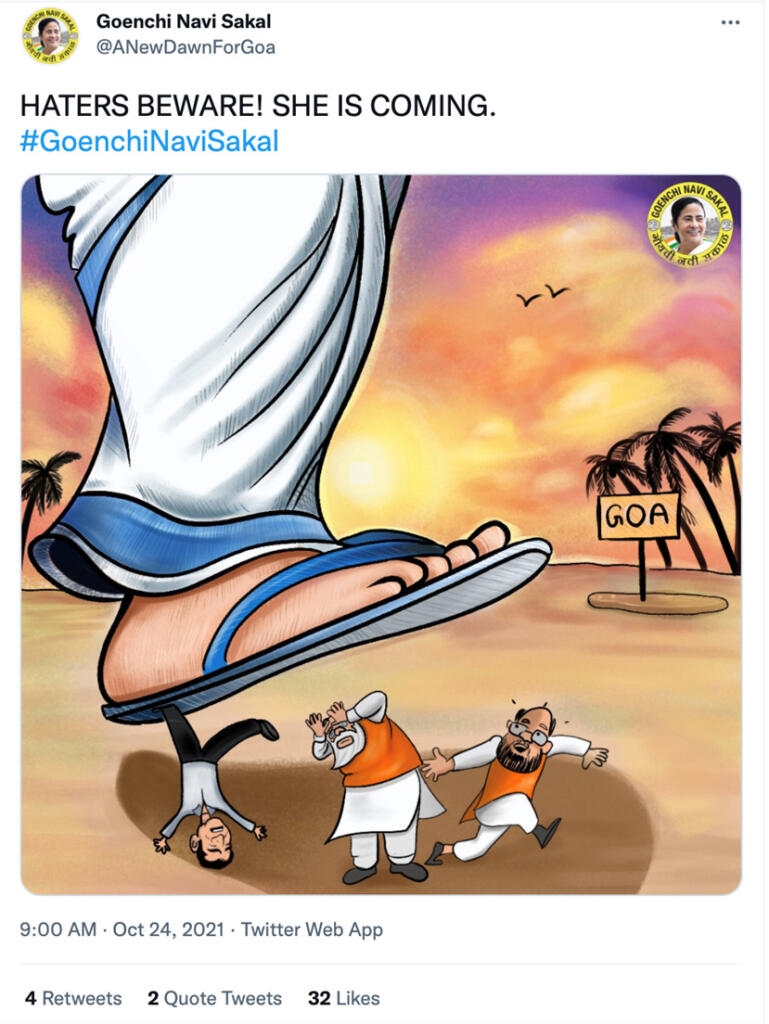 Earlier reported by TFI, after Mamata’s close confidantes were arrested by the Central Bureau of Investigation (CBI) in connection to the Narada scam, Mamata’s band of hooligans started pelting stones at the CBI office, attacked the journalists who dared to cover their acts of vandalism and to top it off, they even tried to break into the Raj Bhawan.

In addition to that, such has been the reign of terror of Mamata that two high profile Supreme Court judges recused themselves from hearing cases against the West Bengal government, within a week, without citing any reason.

In another incident, the non-Trinamool Congress (TMC), especially the BJP voters and state unit workers were dragged out of their homes and offices, killed, murdered, and lynched in broad daylight.

Whether it be the post-poll violence inflicted upon people associated with the BJP or the party’s supporters, or now, those being subjected to unspeakable cruelties due to a complete breakdown of law and order in the state – the TMC regime has made a large section of the populace living alike a refugee in their own state.

However, Tripura CM Biplab Deb seems to follow the footsteps of Uttar Pradesh Chief Minister Yogi Adityanath to deal with the hooliganism of the TMC goons. Despite several attempts by TMC goons to spread anarchy in Tripura, Biplab Kumar Deb has been successful in giving it back to maintain peace in the state.

The dark side of Cryptocurrency that nobody is even thinking about