HOME » Politics » Opinions » Which is the Party of Choice for Indian Voters?

Which is the Party of Choice for Indian Voters?

Many Congress leaders and party supporters say that Congress is the ‘natural party of choice’ for Indian voters. 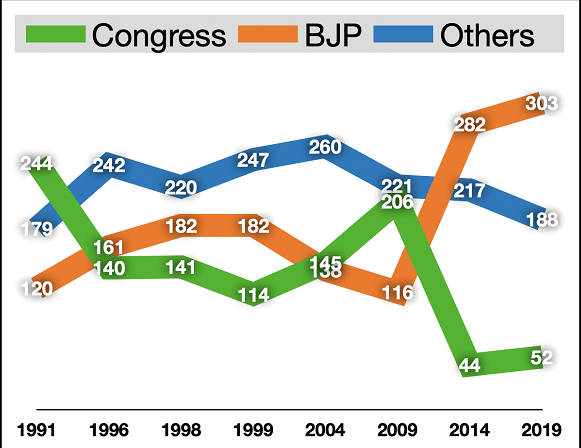 Therefore, which is the ‘natural party of choice’ for Indian voters? The 25-year data says it is the BJP, and NOT the Congress.

In the Sonia and Rahul Gandhi era, Congress won an average of just 112.2 seats or just 20.66% of the total seats in the Lok Sabha.

If we look at the seat share of the NDA and the UPA, both of which came into existence only in 1998—though the name UPA came about in 2004—the story changes in favour of the NDA even more. While the BJP-led NDA won an average of 259 seats, the Congress-led UPA won just 152. Thus, the NDA has won 70.4% more seats than the UPA since the formation of these coalitions. 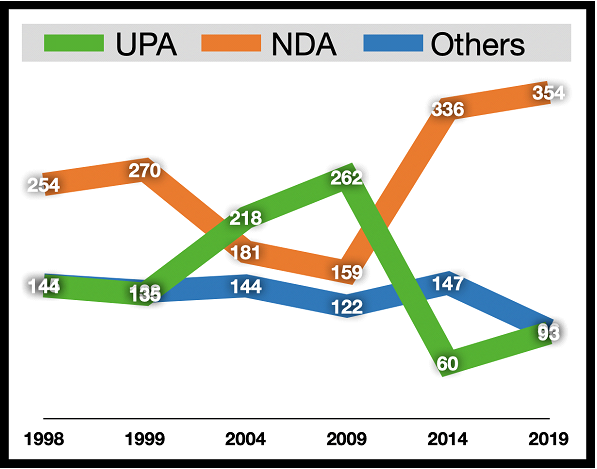 If we exclude 2009, in which the NDA fought under a ‘tired’ 82-year-old LK Advani against the then-popular PM, Dr Manmohan Singh, the NDA won an average of 279 seats—an absolute majority and a gigantic 114.6% higher than the Congress-led UPA’s 130 seats. What would have happened if Narendra Modi was made the PM candidate for the NDA five years earlier, i.e., in 2009? We obviously don’t know!!

Post the 10-year rule of the UPA government remote-controlled by Sonia Gandhi, the NDA won 345 seats and the UPA just 76.5, widening the gap even further. While the UPA’s seats came down 77.1%—from 262 to 60—after 10 years of its government, the NDA’s seats went up by 5.4%—from 336 to 354—after Modi’s first five years.
Doesn’t this signal that Indian voters understand the difference between good and bad governance? Does Rahul understand it?

Since 2014, spokespersons of Congress and other non-NDA parties have been screaming on national TV debates that ‘their voice’ represents 69% of India’s population, as only 31% voted for Modi. They are wrong, as in both 2014 and 2019—Modi contested as the leader of a pre-poll coalition—the NDA—and not of a single party. In his 2018 book The Paradoxical Prime Minister—which is a critique of Modi—Dr Shashi Tharoor keeps harping that BJP got 31% of the votes in 2014. The FACT is that the NDA got 66.9% more votes than the UPA in 2014 and 74.06% more in 2019. 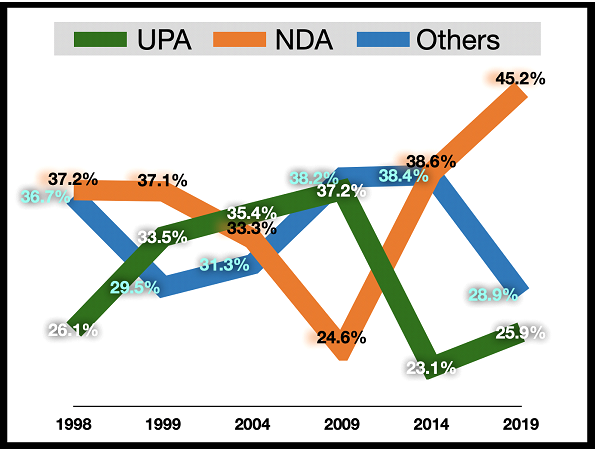 Mamata Banerjee has said on more than one occasion, “Jo humse takrayega wo choor choor ho jayega” (whoever confronts us will be crushed into pieces), but this quote seems to be more appropriate for Modi than for Mamata didi.

This is an extract from Amit Bagaria’s No.1 bestseller Congress-Mukt Bharat. You can buy the eBook from Amazon HERE and the Paperback (Print Edition) HERE.

(The above article has been originally written by Amit Bagaria. Bagaria is a former serial entrepreneur who became an author in mid-2018. He has authored 12 books, out of which six were bestsellers. He is currently working on a book about the ongoing Covid-19 crisis in India.)