“Get my maps straight and then you can talk,” Sitharaman tears into Washington-based thinktank Freedom House for baseless allegations against India

Nirmala Sitharaman, the Union Finance Minister, is known for her befitting replies to her opponents. Be it leaders like Sonia Gandhi or the media houses like ThePrint, which have spread fake news against her several times, Sitharaman destroyed them all the time with her sharp and befitting replies.

This time, Freedom House, a United States-based think tank which releases the democracy index, got it back as good from Nirmala Sitharaman as it gave to India. The organisation that downgraded India’s democracy ratings from ‘free’ to ‘partly free’ with the country’s score being reduced from 71 last year to 67 this year. 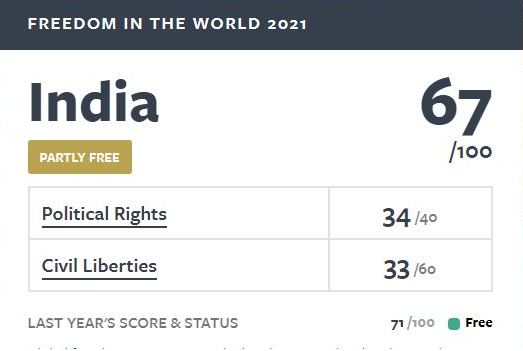 Later Freedom House, which calls itself independent and bipartisan, tweeted about the decline of India in the index with a map of the country without the Union territories of Jammu & Kashmir and Ladakh. “BREAKING: India is not rated “Free” in Freedom in the World 2021. Political rights and civil liberties have eroded in India since Narendra Modi became prime minister in 2014, causing the country to drop from Free to Partly Free in 2020,” tweeted the Washington-based thinktank.

BREAKING: India is not rated "Free" in Freedom in the World 2021. Political rights and civil liberties have eroded in India since Narendra Modi became prime minister in 2014, causing the country to drop from Free to Partly Free in 2020. #FreedomInTheWorld https://t.co/HuNzEAc6Nw pic.twitter.com/mae0CmGpi5

Nirmala Sitharaman destroyed the arguments of Freedom House in a single statement and said, “How do I take you seriously on matters which are so intrinsic in a multi-diverse country, where religions of ancient days have lived together for centuries without any kind of cleansing. Get my map straight and then get your act to talk about my country and its freedoms.”

“I am concerned about a group which does not get the Indian map correct. And this body as per its website says it is an independent body. It doesn’t have the wherewithal to understand what is the sovereign territorial map of India and in a country as diverse as India they have gone into freedom of religion and everything,” added Sitharaman in her statement at the Indian Women’s Press Corps.

Many international thinktanks and NGOs, which tilt towards the left side of the political spectrum, are not happy with the rise of an assertive and outspoken India. They are habitual of dealing with a meek India that used to entertain their whims and fancies and never took strong action against their agenda. The self-righteous media houses of the United States like the New York Times, Washington Post and CNN often criticise the Indian government for not doing what they deem right and taking decisions keeping national interests in mind, but keep mum on the disastrous policies of the Biden administration.

The organisations like Freedom House, which are an extended part of the Democratic Party’s establishment, would never call out the human rights abuses of the Democratic Party in the Middle East, Latin America and Southeast Asia, but would freely ‘opine’ about India without an iota of respect for the government that enjoys the trust of the largest number people in the world and has some of the most popular leaders of the democratic world.

Organisations like Freedom House need to be shown that they are persona non grata in India, as they cannot respect the sovereignty of the country. An organisation that does not show Jammu and Kashmir and Ladakh as an integral part of India would not be entertained by the Indian establishment and Nirmala Sitharaman’s message was the same to Freedom House.