HOME » Politics » Trending » Like Aurangzeb, NCERT is clueless about Qutub Minar as well. And time has come to investigate and penalise the Distorians

Like Aurangzeb, NCERT is clueless about Qutub Minar as well. And time has come to investigate and penalise the Distorians

It has been just a few days since NCERT failed to produce a source for the claim, “All Mughal emperors gave grants to support the building and maintenance of places of worship. Even when temples were destroyed during the war, grants were later issued for their repair – as we know from the reigns of Shah Jahan and Aurangzeb,” made in a history textbook for class 12, titled ‘Themes of Indian History’. Author Neeraj Atri recently made public an RTI reply of 2013, in which NCERT had said that it does not have any source to back the claim that Delhi’s famous Qutub Minar was built by Qutubuddin Aibak and Iltutmish, the Muslim ruler of the city.

‘Brainwashed Republic’, a book by educationist Neeraj Atri on how the children of the country are being brainwashed through NCERT books, gained much traction because it was the first attempt to expose the leftist propaganda in NCERT Social sciences textbooks.

Most of the NCERT textbooks, especially of subjects of Humanities and Social Sciences like History, Geography, Civics, Economics, etc have been written by the professors of JNU under the tutelage of ‘distorians’ like Romila Thapar, Irfan Habib, Satish Chandra, Bipin Chandra, Mridula Mukherjee- most of whom are self-professed “Marxist historians”.

The paragraph which glorifies Mughal rulers like Shah Jahan and Aurangzeb is in chapter 9 of the book ‘Themes of Indian History’, titled ‘Kings and chronicles (The Mughal Courts)’. As per the NCERT website, the chapter is written by Najaf Haider, Associate Professor, Centre for Historical Studies, Jawaharlal Nehru University, New Delhi. 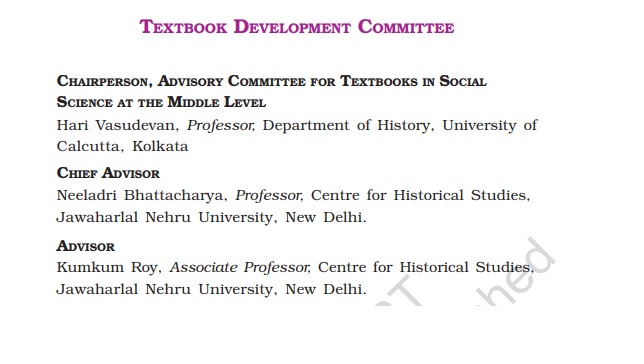 For an instance, the paragraph which glorifies Mughal rulers like Shah Jahan and Aurangzeb is in chapter 9 of the book ‘Themes of Indian History’, titled ‘Kings and chronicles (The Mughal Courts)’ is written by Najaf Haider, Associate Professor, Centre for Historical Studies, Jawaharlal Nehru University, New Delhi.

Given the fact the source for the claim made in NCERT books cannot be produced, this forces us to suspect that all NCERT history books are filled with the ‘imagination’ of the writers from JNU. The government should book these writers for misleading the public as well as students for more than a decade and throw them behind bars.

With the National Education Policy in place in 2020, the government is now focusing on revising the syllabus and it seeks to end the distortions inserted by British Imperialists, Nehruvian socialism, Marxists and leftists in NCERT textbooks, but along with that, the government should also put effort to book these distorians who present factually incorrect history about rulers like Aurangzeb and monuments like Qutub Minar to young children.

Hypocrite much: Akshay Kumar once considered Daan and Chadhawa as wasteful things, and now he has made a generous donation to Ram Mandir Trust

Have series like Tandav and Pataal Lok led to a spate of anti-Hindu violence across the country?