Making it very clear to India Inc. that the government is willing to subsidize not just agriculture but industries too, the Modi government has announced a Production Linked Subsidy (PLI) scheme for 10 more labour-intensive sectors.

Path breaking Scheme which will transform Manufacturing & Exports : PLI sectors with their Financial Outlays as Approved by Government. Thanks PM @narendramodi pic.twitter.com/OM0jD4NH8N

The PLI scheme, a kind of subsidy to the industries in the sectors where India is dependent on imports, is part of the ‘AtmaNirbhar Bharat’ Abhiyan. The government announced a total subsidy of 1.45 lakh crore rupees. “These are sunrise sectors selected keeping in mind the need for job creation and getting India to link to the global value chain… the larger umbrella principle is we have to have a self-reliant India,” Finance Minister Nirmala Sitharaman said, briefing the media after the Cabinet meeting. 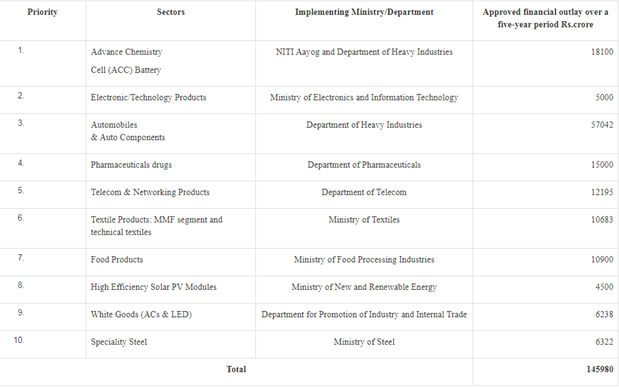 The sectors for which the government has extended the PLI scheme range from food processing to automobiles, electronics and telecom, textile and steel to solar panels.

Also, the government further extended the PLI scheme to the pharmaceutical sector to ensure that India becomes self-dependent in the next few years and cuts dependence on China. “The earlier scheme was only for APIs (Active Pharmaceutical Ingredients), KSMs (Key Starting Materials) and drug intermediates. This scheme is expected to be for formulations, complex APIs, excipients, biosimilars, vaccines and other critical therapeutic categories,” said a senior government official on condition of anonymity. “Some drugs including many biosimilars are not made in India and are available only outside the country,” the official said.

Earlier the government had started PLI scheme Electronics sector focusing on domestic manufacturing of mobile phones with an outlay of 40,000 crore rupees. Later the scheme was extended to the manufacturing of APIs and medical devices (one of the largest imports of the country due to lack of synthesis between engineering and pharma sector) to cut the dependence on China. This takes the total amount of PLI schemes around 2 lakh crore rupees which is equal to the food subsidies provided by the union government.

“The PLI scheme across these 10 key specific sectors will make Indian manufacturers globally competitive, attract investment in the areas of core competency and cutting-edge technology; ensure efficiencies; create economies of scale; enhance exports and make India an integral part of the global supply chain,” said the statement released by the government.

The industry bodies whole-heartedly welcomed the extension of the PLI scheme and said that this will lead to massive job creation in the next few years. “The sectors covered under the PLI scheme are strategic, technology-intensive and also important from the perspective of employment generation in the country. We also hope to hear about such progressive schemes for more sectors,” said Sangita Reddy, president of the Federation of Indian Chambers of Commerce & Industry (FICCI).

The PLI scheme would usher Make in India which was started by the Modi government in the first term but had not met with success so far. This is also an indication that the government is willing to incentivize the industries and does not care for phoney jibes like ‘Suit-Boot ki Sarkar’ from the leaders of the opposition. The Modi government is slowly shackling the fundamentals of the socialist economy and trying to take the political economy of the country in the direction of the rule-based socialist economy.

A delicious affair: BJP is voraciously eating into the vote bank of Bihar’s caste-based parties