No Result
View All Result
Newswire
US sanctions Russian govt institution tied to Malware 19 mins ago
Young Souls and Phoenix Point to arrive at Stadia next year 31 mins ago
Indian Ocean pay tribute to Covid heroes in new anthem 31 mins ago
Men produce more Covid antibodies than women: Study 31 mins ago
Luis Arce declared Bolivia’s President-elect 34 mins ago
Lockdown for 240 deities too amid Kullu Dussehra festivities 43 mins ago
Next
Prev

by Mahima Kalra
in Economy1
0

Inflation is tax on the poor, goes the famous proverb in economics. For decades, Indian poor and middle class suffered from what was proverbially known as ‘Mehngai’ and this was one of the reasons that the Congress led UPA government lost so badly in the 2014 general election. In fact, Congress was reduced to double digit seats and could not get even the position of the Leader of Opposition, and two major reasons behind such a humiliating downfall were inflation and corruption, or Mehngai and Bhrastachar.

The Modi government addressed these two primary issues of the people with institutionalization of Inflation targeting through Monetary Policy Committee and a transparent government. India adopted an inflation target in March 2015, after a committee headed by the then Deputy Governor of RBI, Urjit Patel, recommended that the target retail inflation be used as the nominal anchor for monetary policy. After discussions between the government and the RBI, the target rate of inflation was fixed at 4 per cent with a tolerance band of 2 per cent. 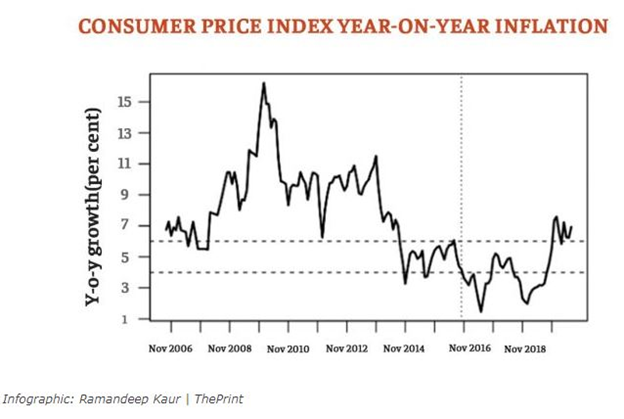 High growth rates are often associated with inflation. It is a paradoxical relationship wherein growth cannot be sustained under prolonged high inflation and also inflation is bound to be high with higher growth rates. In 2009-10, there was a fall in growth rate but inflation rates remained high, reaching 12.17 per cent in November, 2013. The goal for the NDA government was to manage a perfect balance where inflation rates stay low and growth rates still high. So far, it has managed to keep inflation tamed, however, the growth rate has fallen down in the last few quarters. 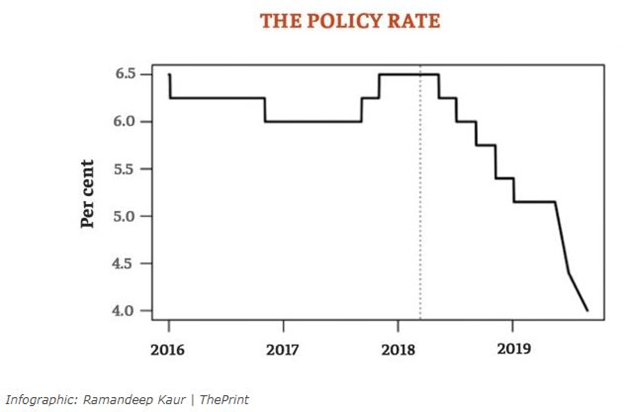 In the last few quarters, policy rate has been brought down drastically in order to spur lending, and this is expected to result in northward movement in inflation. However, so far the government has been able to keep inflation down and given the inflation targeting regime the country has, the policy rate will go up if inflation goes above 6 percent for two or three months.

The control over inflation has been one of the less publicized Modi government reforms in the policy circles, however, the government benefited from this as Mehngai, which used to be a major issue in almost every election, is no longer a problem of common people.

Successful inflation targeting marks the end of taxation of the poor that was prevalent during the UPA era, when the growth was high but so was reckless bank lending and inflation which wandered up to double digits. The lack of structural reform and policy paralysis were the main reasons behind the problems which have now been addressed one after the other by the Modi government. Given the structural reforms carried out by the government in the last few years, the economy is poised for exponential growth once it emerges from lockdown glut.

The Atmanirbhar Bharat would give advantage to domestic companies over the foreign ones and the opening up of more and more sectors for private players would bring much needed competition in these sectors and eliminate inefficient government companies like Ordnance Factory, HAL, BSNL, Air India and many others. The entry of private players would bring efficiency in these sectors and take the country on the path of double digit economy and 5 trillion dollars economy.

POTUS Trump 2.0, COVID Vaccine, non-NATO Turkey and a beaten China – How the world will look in 2021

A vaccine is around the corner and India is at the forefront: Modi govt has set aside $7 billion for vaccinating Indians

‘Free vaccines for Bihar,’ was a very unwise statement coming from the BJP. Especially when it opposes freebie culture