The Chinese Yuan will never replace the US Dollar. But the worth of other currencies will significantly rise in the coming years

by Guest Author
in Economy, Economy1

A few months after the global financial crisis broke out in March 2009, China and Russia asked for a new global currency to end the hegemony of the American dollar. China and Russia wanted a single global currency “that is disconnected from individual nations and can remain stable in the long run, thus removing the inherent deficiencies caused by using credit-based national currencies.” 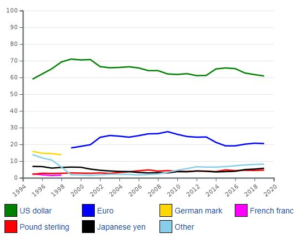 By the early 2010s, many Sinophile economists including India’s former CEA Arvind Subramanian predicted that the Chinese Yuan will overtake the dollar as a pre-eminent currency by the early 2020s. However, as of today, the Chinese Yuan remains far from anywhere near the US dollar in terms of trade or as the reserve currency of central banks. Chinese central bank itself is the largest hoarder of dollars and a huge chunk of Chinese debt is issued in dollars.

Therefore, any sentimental analysis or prediction that Yuan is going to overtake the dollar in the near future remains fictional. However, given the reversal in globalization and increasing resentment against free trade which leads to surplus for some countries and deficit for others, the dollar eminence is increasingly weakening.

Given the trends in the trade ecosystem, one can say that there will be near zero trade deficit/surplus between two countries in the future and any country will buy only as many products from others as it can sell to them. In such a situation, the two countries will trade in their respective currencies instead of using dollars as it will be some sort of sophisticated version of barter trade, and therefore, the Dollar would not be needed for global trade. Once the currency’s eminence diminishes, central banks will diversify their basket of reserve currencies.

So, the dollar will remain a pre-eminent currency in the global system but its market share would decrease significantly only to be occupied by a large number of currencies, but not dominated by the Chinese Yuan.

Many countries have already started the practice through trading in their respective currencies and carrying out currency swaps. In the last few years, many countries including India (with UAE, Japan, and Sri Lanka, etc) carried out several currency swap agreements with countries with which they trade in large volumes to reduce dependency on dollars. 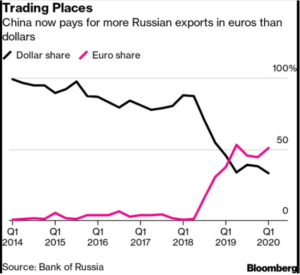 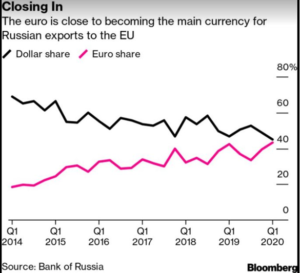 Russia, one of the countries which asked for a global currency in 2009, is now increasingly using the Euro for trade with the European Union and China which are its largest trading partners. For exports to China and the EU, Russia receives payments in Euro as the country pays to the EU in Euros for its imports. Putin has vowed to de-dollar-ize the Russian economy and he is successfully doing it.

In the upcoming years, many more countries would follow the same practice with their major trading partners to reduce their dependence on American dollars. So, the Chinese Yuan would not replace the US dollar as the pre-eminent currency but the basket would diversify with a set of currencies increasing their share in global trade as dollar market share comes down.

As Chinese businesses collapse, anti-Xi Jinping sentiment is rising and Xi is set to begin the Great Purge 2.0

As China exports warships to Pakistan, India gets ready to sell BrahMos to China's rivals

China had its eyes on Russia’s Far East, now India and Japan have teamed up to kick China out