China is preparing to challenge Russia

Of many effects that global warming is going to have on our planet, one could be the possibility of skirmishes and tussles between Moscow and Beijing. In the present scenario of the Indo-Pacific policy to contain China and painful sanctions of Russia from the West, the two authoritarian countries have stitched together an “axis of convenience”. But things could change as rising temperatures melt polar ice cap.

The climate change and global warming have opened up the Arctic to greater human activity. Commercial shipping lanes and exploitation of natural resources from this region could become a reality earlier than expected. This is where China and Russia are at odds with each other.

Russian and Chinese views on the Arctic sharply militate against each other. Russia is a natural Arctic power. The northern country occupies almost the entire territory to the North of Eurasia except the Scandinavian countries. It shares the longest coastline with the Arctic Ocean.

Kremlin still believes that Arctic is its “privileged sphere of influence.” Russian authorities strongly assert the primacy of eight Arctic countries in the region. Moscow is not very keen on non-Arctic powers playing a dominant role in this part of the world.

At the top of Russia’s version of Arctic hierarchy are the five Arctic Ocean coastal countries- Canada, Denmark, Norway, Russia, and the United States. Russia believes that this is in line with the international maritime law as the five countries have direct access to the Arctic Ocean, and have Exclusive Economic Zones (EEZs). They are followed by the three permanent members of the Arctic Council- Finland, Iceland, and Sweden.

For Russia, the interests of other countries including the observer nations such as France, Germany, Italy and the United Kingdom in Europe, and India, Japan, South Korea and even China in Asia are at the bottom of Russian hierarchy. This is where Chinese views differ, and differ sharply.

China wants to claim that Arctic is a part of the global commons, much like Antartica. China is negating Russian sovereignty over Moscow’s vast territorial waters in the Arctic Ocean which will become a prolific commercial hub in a distant future. In fact, by claiming that Arctic is a common future for the human race, Beijing is conceiving a new world order in which it will set the norms as a global superpower.

In 2018, the Dragon went a step further. Beijing disclosed its Arctic ambitions which raised fears of a Chinese takeover of the Arctic. China identified itself as a “Near-Arctic State” in its White Paper. This is rather misleading given that China is as far away from the Arctic than Poland.

China had stated, “The Arctic situation now goes beyond its original inter-Arctic States or regional nature, having a vital bearing on the interests of States outside the region and the interests of the international community as a whole, as well as on the survival, the development, and the shared future for mankind.”

The White Paper had further added that countries should respect “the rights and freedom of non-Arctic States to carry out activities in this region in accordance with the law.”

Russia doesn’t like Chinese interference in the Arctic. In 2015, Russian Defence Minister Sergei Shoigu had complained that non-Arctic States are using their military and economic power to “strive for greater roles in the Arctic,” in a veiled jibe at China.

The stakes are high. Russia looks at the melting Polar ice-cap as a clear opportunity to become a superior naval and maritime power that it could not become because of a disadvantageous geography in the post-Soviet era. China however wants to use the upcoming commercial and rich maritime zone to achieve its own geopolitical goals.

Currently, Russia has just one warm water naval base- Sevastopol. With a melting Arctic, Moscow will want many more ports and naval bases so that it can exert more influence in the global equations than before.

At a commercial level, Russia wants to develop a Northern Sea Route (NSR) along its Siberian coast. This will become an alternative to, and at least take away much of the traffic that passes through the Suez Canal. Moscow thus wants to become a pre-eminent Arctic power that connects Asia and Europe, and become an economic power in the process.

Not only the sea routes and naval bases, a melting Arctic is going to throw open the vast hydrocarbons that lay unexplored in the Arctic. The Arctic is estimated to contain 13 per cent of the world’s unexplored oil and around 30 per cent of undiscovered gas. This is a resource-rich region which Russia wants to use as a “strategic resource base”.

For a country like Russia that is highly dependent on hydrocarbons-extraction, the importance of the resource-rich region cannot be overemphasised.

China however plays spoilsport. Beijing already has its own moniker for the Northern Sea Route (NSR), the ‘Polar Silk Road’. China wants to make the upcoming Arctic sea route a part of the Belt and Road Initiative (BRI) project. There is no doubt that Beijing will use its economic heft to become the dominant player in the Arctic.

For China too, the stakes are high. The Arctic Sea route or the Polar Silk Road as China calls it is Beijing’s strategy to avoid the Malacca dilemma. The Strait of Malacca is a narrow choke point that divides the Indian and Pacific Oceans. In event of a conflict, India can easily block this narrow passage and deprive China of its oil imports from the Middle East apart from closing the trading routes of the exports-based economy. 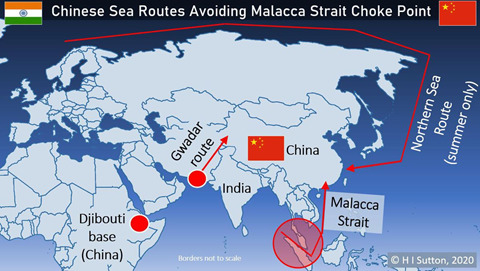 With the new shipping routes opening up due to global warming China can fulfil its Blue-Water navy ambitions. And not just shipping routes, China also wants to become the country that builds ports and other infrastructure in Nordic-Baltic countries like Finland and Denmark, ultimately making them a part of the BRI.

And we know how invasive BRI can be. China is also the biggest importer of hydrocarbons and in a distant future, it will want to reduce energy dependence by tapping into the Arctic.

This is however going to clash with Russian interests and open up the Arctic to more conflicts. Behind all the camaraderie that Russia and China seem to share, there could be a lot of distrust and tensions between the two Red countries that could play up as quickly as the Polar ice in the Arctic melts.

Pakistan has been sent a message by US and the world: Stop siding with China or prepare to go extinct

‘Why are the three Khans silent?’ Subramanian Swamy takes up Sushant’s case, calls for investigation on Bollywood