Want to know how many lives the 4 lockdowns saved in India? Niti Aayog has just released the number

A massacre was averted

For the uninitiated and the newly turned arm-chair epidemiologists, NITI Aayog has come up with a report that will but certainly quash the beliefs of the naysayers about the effectiveness of the lockdowns that have been put into effect by the Union government since March 25.

According to government data released by Niti Aayog on Friday, the first two phases (March 25-April 14 & April 15-May 3) of coronavirus-induced lockdowns were able to save up to 78,000 lives and avert as many as 29 lakh Wuhan virus cases.

The study which was assimilated from five different studies summarised that 14-29 lakh new cases were averted between the first half of nationwide lockdown. The lockdowns also helped in minimising the number of people spreading the infection. Meanwhile, 37,000-78,000 deaths were also averted during the same period, it further added.

The lockdown period helped the government with preparations regarding COVID-19 specific health infrastructure, increase in testing capacity and vaccine research amongst myriad other developments that had been mentioned in the report titled ‘Lockdown: India’s timely public health measure to fight COVID-19 pandemic’.

According to VK Paul who was addressing the meeting—the lockdown, which was imposed on March 25, has achieved its purpose by giving the nation enough time to ramp up the health infrastructure and raise awareness about the COVID-19.

VK Paul also cleared the air of doubts regarding an official graph he had presented last month that suggested India would have no new COVID-19 case by 16 May. As always it was a particular section of media that had interpreted the graph in such a way that showed the government in a negative light.

“No one has ever said that the number of cases would go down to zero at a particular date, there is a misunderstanding, which needs to be corrected. For the misunderstanding, I feel sorry and apologise,” the member of NITI Aayog came up with the dignified response.

Paul said the graph was based on mathematical data. While he apologised for the ‘misconception’, he said “we showed you factual information and no claim was made ( regarding the number of cases falling to zero)”.

The number of averted cases prove that the government’s decision to go into a lockdown was a well-timed decision which has stopped the pandemic into snowballing into a major catastrophe and killing millions of Indians—given the high population density of the country.

The report also reaffirms the belief India put in its doctors and the ICMR instead of listening to the tainted World Health Organisation (WHO) by going ahead with the lockdown.

WHO kept shouting off the roof that ‘testing, testing and only testing’ was the only way to stop the spread of the virus. While ICMR on the other hand iterated, ‘isolation, isolation and isolation’ with gradual increase in the testing capacity was the right way to go about it.

In dealing with Coronavirus, the countries, which kept WHO at arm’s length (Taiwan, Singapore, South Korea, and India) have been more successful.

The process of ICMR is paying dividends now as India has been routinely testing over 1 lakh samples over the last few days. It could not have been possible earlier as the WHO was insisting. From a “one lab, one test” scenario at the start of the outbreak to one lakh tests per day in May, India has sure come a long way. 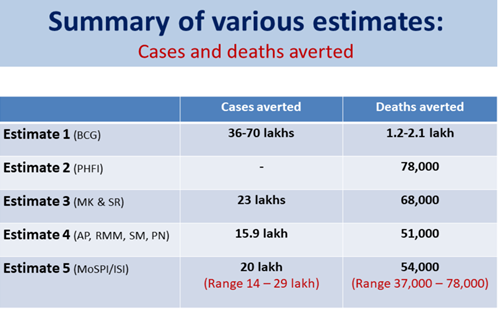 The gains made through lockdowns can be easily diluted if the citizens did not bring about a change in their behaviour by wearing masks and maintaining strict social distancing norms whilst the relaxations are introduced. The lockdown has served its purpose, now, it’s up to the citizens to take the onus.