Amid the fall in global demand for oil due to slowdown in economic activity since the outbreak of Coronavirus, Russia has refused the OPEC+ demand to cut the oil production, to maintain a stable market price. Russia, which allied with OPEC cartel in 2016 for mutual benefit, has allied with Saudi Arabia to maintain oil prices at around 60 dollars per barrel. However, the United States Shale industry used this opportunity to increase its market and benefitted from the coordinated cuts in the production.

Now, with the oil demand at the lowest since the global financial crisis 2008-09, Saudi led OPEC has called for early meet at its Vienna headquarter, in order to convince the group members and Russia to cut the production to maintain the price. However, Russia, which wants to teach a lesson to the United States, has refused to cut the production. 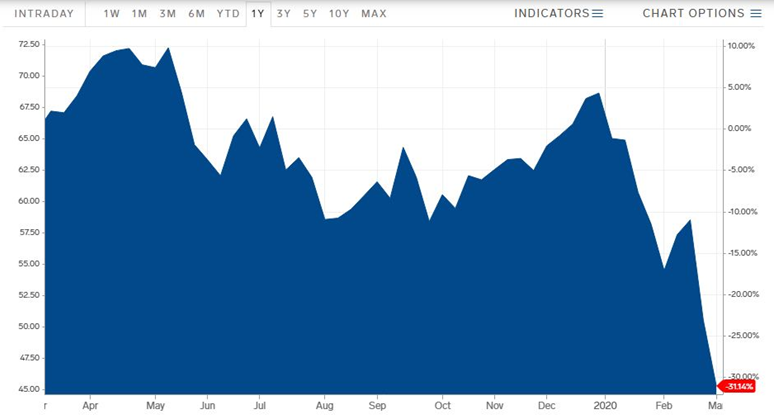 This sent shockwaves in the oil market and the prices fell by more than 10 per cent, reaching around 45 dollars per barrel. According to analysts, the oil prices could hit an all-time low of 25-30 dollars per barrel, if stalemate on production cut is not solved.

Russia wants to teach a lesson to the US shale industry, which doubled production in the last few years, benefitting from the cuts by OPEC and Russia. Now, with Coronavirus hit oil demand, the shale oil is no longer competitive in the market, as it goes in loss if the prices are below 50 dollars per barrel. Russia sees this slump in demand as an opportunity to destroy the shale oil industry of the United States and end the competition for one and forever.

Amid this fist fight among Saudi led OPEC, Russia and the United States, oil-importing countries like India are poised to benefit, as they will be spending less on oil imports. India, which depends on imports for 80 per cent of its energy needs, spends around 120 billion dollars every year on oil import. Oil imports account for 20-25 per cent of the country’s total import bill, depending on the price in the international market.

The Russian oil industry was not happy with the government’s decision to cut the production and opposed the alliance with OPEC. However, given the hegemonic control of Putin, no industrialist spoke about this in open, but they continued to lobby against the OPEC-Russian alliance.

The Russian industry giants like Gazprom and Rosneft were of the view that the country can increase its market share in the global basket if the alliance with OPEC is broken. With the Coronavirus infected slump in global demand, the industry got a golden opportunity to break the US shale oil industry and tried to convince Putin to break the pact with OPEC, to which he agreed.

In the last few years, Russia has warned OPEC about the US shale oil industry, but the oil cartel has not been able to convince Trump on this.

Now with the golden opportunity to break the United States shale oil industry, Russia is ready for revenge. “If you always give in to partners, you are no longer partners. It’s called something else,” said spokesman Mikhail Leontiev. “Let’s see how American shale exploration feels under these conditions,” he added.

After failing to contain COVID19 outbreak, China pins the blame on USA