Narcos India chapter: Northeast is brimming with drugs from the notorious Golden Triangle

Only Tripura Govt has been able to curb the drug menace

by Akshay Narang
in Opinions, Trending
0

The Manipur Government has reportedly detained 33-year old drug kingpin from Myanmar, Kyaw Kyaw alias Abdul Rahim. A police team had earlier arrested him from the Imphal airport in August last year and had recovered Rs 60,000, 15 notes of denomination of 100 US dollars, one 500 Kyats, two mobile handsets and some documents from the possession of the drug kingpin.

His arrest had come at the heels of seizure of a huge consignment of WY tablets (a synthetic drug) in Manipur’s Thoubal district, valuing Rs. 400 crores in the international market. WY tablets are mostly known as ‘Yaba’ also called the ‘madness drug’ which is a form of methamphetamine and has taken drug markets from India to Thailand and Malaysia by storm.

Golden Triangle, as it was named by a Central Intelligence Agency (CIA) operative to highlight what was then the largest drug trading zone across the globe, is a largely mountainous region covering north-eastern Myanmar, northern Thailand, northern Laos and the north-eastern part of Vietnam.

The region is infamous as a major producer of Papaver somniferum, more commonly known as opium poppy, which is ultimately used to produce heroin that enters southern China and Hong Kong from here and then spreads out into other parts of the world. These cartels have morphed towards greater sophistication, for the drug markets, with tablets mimicking the infamous party drug, ecstacy.


Till the 1980s, Thailand used to be a big transit hub for heroin. But the country has reined in drug trafficking to a great extent. Now, it is Laos and Myanmar who have emerged as big centres of the illegal drug trade.

The drug cartels have now become sophisticated, and have shifted to methamphetamine from heroin with Yaba (Thai for “crazy drug”), meth mixed with several adulterants finding its way into several parts of Asia from Myanmar, which is a major production hub of this drug.

In the Indian context, India’s 1,643 km long border with Myanmar puts the country, especially the Northeast in a vulnerable position as far as the drugs problem emanating from the dreaded Golden Triangle is concerned. 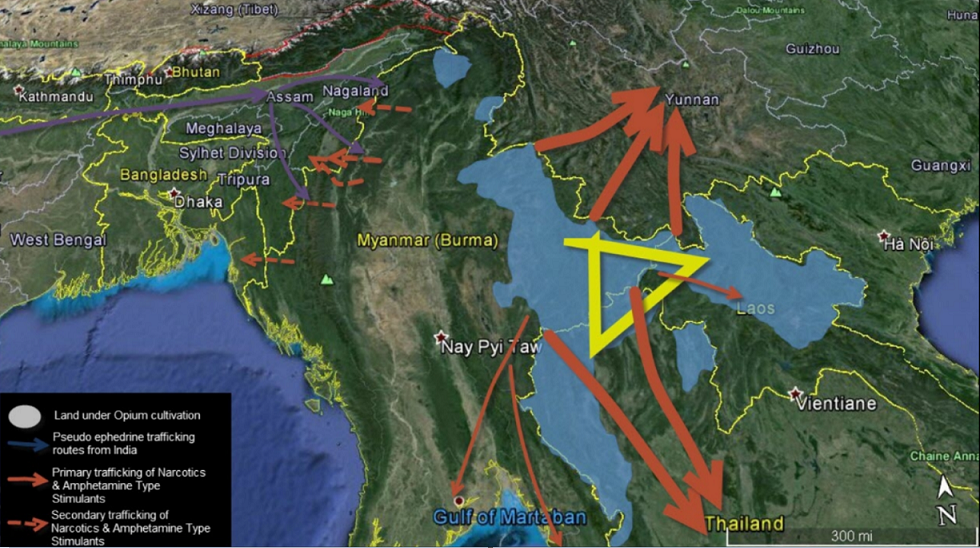 The rough terrain, high mountains and deep forests that dominate the bordering areas between India and Myanmar make the long international boundary further vulnerable to drug trafficking. Most of the drug smuggling takes place directly through the Chin state of Myanmar which borders northeastern states like Mizoram.

The Free Movement Regime (FMR) between India and Myanmar is also prone to misuse by criminals and drug cartels that compounds the problem further.

Several Northeastern states of India are today battling a major drug problem and the proximity to the Golden Triangle is at the core of this issue. As per a report by the Ministry of Social Justice and Empowerment, around 2.1 per cent of Indians use opioids such as opium, heroin and non-medical sedatives.

It doesn’t really come as a surprise that the four North-eastern states of India- Arunachal Pradesh, Nagaland, Mizoram and Manipur that are contiguous to Myanmar have taken the lead when it comes to this opioid use.

But the issue is not restricted to the states immediately bordering Myanmar and extends beyond to other North-eastern states like Meghalaya, Tripura and even Sikkim.

In major Northeastern cities like Shillong, for instance, it is a common news headline concerning women from states like Mizoram, selling drugs like heroin in the garb of vending garments or shoes at the roadside.

Northeast is a gateway really and the drug problem posed by the Golden Triangle finds its way into other areas from North-eastern India.

The state of Tripura, which very recently faced a major drug trafficking menace, also opens up the prospects of drugs smuggling across the border into Bangladesh.

The result being that, at least, before the Biplab Deb government came into power in Tripura, drug smugglers and traffickers thrived in the region, and Bangladesh which already faces a major addiction problem among its youth bore the brunt of the illicit drug trade that traces its origin in the infamous Golden Triangle. The Biplab Deb government is known to have cracked down hard on the drug menace.

The Northeastern states such as Mizoram and Manipur which have had a chequered past riddled with political problems and insurgency, are today politically peaceful, but now it is the drugs problem that has put them in a spot of bother.

With corrupt state regimes failing to plug the rampant drugs trade and the rise of tainted politicians in states like Mizoram, drugs have become a major political issue in this part of India. This is also why Presbyterian Synod, which represents the largest Church body in Mizoram exhorts people not to elect tainted candidates before every election in the state. The Church has also been spreading awareness against drug abuse among the youth.

On the face of it, the Golden Triangle might be dreaded for pushing drugs into Northeastern India. But the real repercussions are even deeper. Insurgent and militant outfits like NSCN (K) and Garo National Liberation Army (GLNA) are still active though not as influential but they thrive on the rampant drugs smuggling in the region. The insurgent groups that aid those pushing drugs into the Northeast, and play an influential role in allowing the drug cartels to infest India find a viable source of funding in the illicit arms and drugs smuggling. In fact drug trade has been directly connected with arms supplied to insurgent groups in the northeast.

The region also happens to be not too far from the Naxal affected areas and LWE might also be benefitting from drug trafficking in the region. The apprehension finds substance in the Narcotics Control Bureau report that largest seizures of drugs such as opium, heroin, etc., have taken place in the Red Corridor in states like Jharkhand, Bihar and Andhra Pradesh.

And then there are security challenges that do not meet the eye generally. In Bangladesh, illegal Rohingya immigrants have been caught red-handed trafficking Yaba (crazy drug). And then the Rakhine state from where Rohingyas have migrated in large numbers is the second highest producer of Yaba in Myanmar.

Rohingya infiltration into India and Bangladesh could, therefore, be a big source of drugs smuggling in both the countries. Moreover, the Arakan Rohingya Salvation Army (ARSA) may be trying to, or worse may have already, found a prolific funding source in the illicit drug trade. The Rohingya terror group, ARSA is already a recognised terror threat in both Bangladesh and India. Now, the dimension of illicit drug trafficky could complicate things further.

India is not the only affected State as far as the illicit drug trade and smuggling from the Golden Triangle are concerned. All affected stakeholders- China, India, Thailand, Myanmar and Bangladesh need to come together and carry out a coordinated campaign and eliminate the threat posed by sophisticated, increasingly menacing drug cartels in the Golden Triangle.