Zakir Naik, the controversial Islamic preacher from India who is living in Malaysia, is slowly turning into a public icon in the country. Naik is President of Islamic Research Foundation and a Public speaker and in the last few months, he has been the counsel of Mahathir Mohammed, who is ‘Islamizing’ the Malaysian society.

The 94-year-old Mahathir is trying to establish himself as the new leader of the Islamic world, which could help him to save the chair and Naik is his man Friday in Islamization of Malaysian society.

A public university in Malaysia has declared Naik as ‘icon of the Islamic world’ in a university question paper. A question is Universiti Malaysia Perlis examination paper on Ethnic Relations reads, “Zakir Naik is one of the icons of the Islamic world. He is very active in spreading true Islam and following the Quran and Sunnah of Rasulullah SAW. He is able to reason and to answer every question that is asked to him. However, in Malaysia, he is no longer allowed to deliver his preaching. In your opinion, as a Malaysian, why does this happen?”

Students were given a multiple-choice answer with the following reasons, almost every option looks like the people of the university are extremely concerned over why Malaysia people are not focussed on their religion:

“1) Malaysians do not bother to receive information

2) Malaysians were sensitive and feel threatened for no reason

3) Malaysians just follow the crowd without verifying any information

4) Malaysians are ignorant about their own religion.” 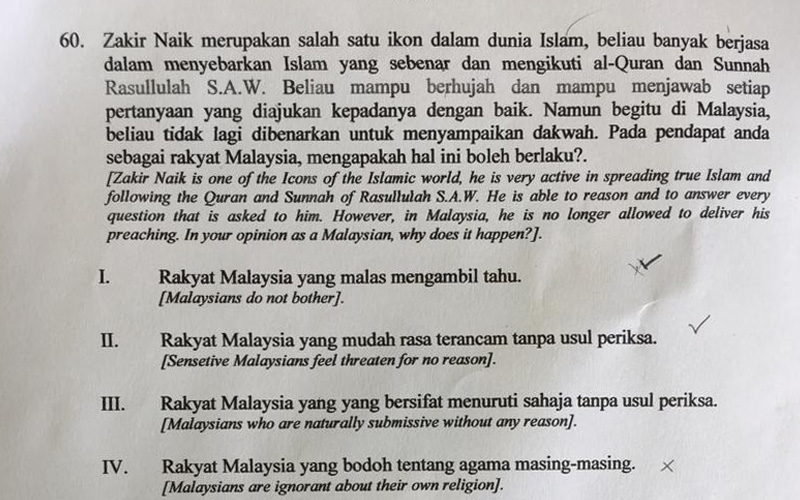 While a social media uproar broke out against this trend, it is a clear indicator that the longer Zakir Naik stays in the Southeast Asian country, the greater his following becomes, to the detriment of minorities in Malaysia. In fact, in the last decade, Islamism has been on the rise in Malaysia, which used to follow a more tolerant and liberal version of the religion. For centuries, schools of Hinduism were the prominent religion in Malaysia and therefore the Malaysian version of Islam was moderate.

Before being elected to power, Mahathir promised a liberal regime compared to his predecessor, and therefore was supported by linguistic and ethnic minorities. But, as witnessed in the last year, Mahathir is following ‘Bhumiputra (son of the soil) policy’ of Malaysia. Even Mahathir’s previous regime (the early 1980s to early 2000s), with Ketuanan Melayu as its core ideology, favoured ethnic Malay community, which constitutes almost 70 per cent of the country’s population. Mahathir is now also drifting towards radical Islam.

According to Associated Press, authorities in Malaysia have arrested more than 160 in the past two years for suspected ties to ISIS. Militancy and terrorism have seen a steady rise in Malaysia over the years. Between 2013 and 2016, around 250 people were arrested because of their ties with the Islamic State. With Mahathir’s Islamization drive, religious and ethnic chauvinism is on a further rise in the country.

Zakir Naik’s public speeches were banned in few states of Malaysia, with the support of the Hindu lobby. But, the public universities supported by the government are now criticizing the move. Naik, who is facing criminal charges in India and Bangladesh, is living in Malaysia since last three years and was granted permanent resident status by the previous Malaysian government. The Indian government made an extradition request in July last year but the Malaysian government has not taken any action so far.

A few weeks ago, the Malaysian government had arrested the people who criticized Zakir Naik. Two DAP party assemblymen G. Saminathan and P. Gunasekaran were arrested under the penal code, and are being investigated for alleged links with banned Sri Lanka organization- LTTE. But, Democratic Action Party (DAP) politician, Charles Santiago questioned the arrest and said that LTTE were “freedom fighters” and, as of now, the movement does not exist even in Sri Lanka. The MPs has been arrested on the alleged charges with a movement that does not even exist in the origin country.

Naik was also seen on the sidelines of Kuala Lampur summit of Islamic nations. It is very much evident that Mahathir is the person who is promoting Zakir Naik, who is his man Friday in the Islamization drive.

After Iran, the trigger-happy USA has a solid case to strike Pakistan but it plans to do the opposite

Look nowhere else for justification of CAA. Pakistan is butchering its minorities as we speak