No Result
View All Result
Newswire
Baghdad security breach won’t be repeated: Iraqi PM 24 mins ago
Bolsonaro says ‘Dhanyavaad’ to Modi for vaccine exports 30 mins ago
Biden vows to work with Canada during call with Trudeau 42 mins ago
Father, son shot dead in Agra over a goat 51 mins ago
UK retail sales suffer record fall in 2020 60 mins ago
Madhur Bhandarkar on why he chose lockdown as subject for new film 1 hour ago
Next
Prev

While the left-liberals continue to present a distorted image of the anti-CAA protests as they look to squarely blame the police, Bar Council of India has given a major shot in the arm to the police personnel as it has slammed the rioters and expressed solidarity with police saying humiliation of police won’t be tolerated.

In a press release issued by the Bar Council of India, it expressed its solidarity with the police and armed forces in relation to the ongoing Citizenship Amendment Act (CAA) protests taking place across the country. The release signed off by BCI Chairman Manan Kumar Mishra appeals to all lawyers, Bar Associations and Councils, and student bodies of NLUs and other law colleges to play a prominent role in ensuring that law and order is maintained throughout the country. It is further stated that if anyone is involved in any kind of violence, he/she must be brought before the administration for further action.

The release also reads, “The Leaders of the Bar and young students are requested to take an active role in diffusing the disturbances and violence in the country: We are to convince the people and the illiterate ignorant mass, who are being misled by some so-called leaders (for serving their political ambitions) the matter concerning the Citizenship Amendment Act is under consideration of our Supreme Court, therefore everyone should await the decision of the Apex Court.”

The release further asserts that any damage to public and private properties, as well as attacks on police personnel, would be viewed very seriously. The legal fraternity will not tolerate humiliation of the police or defence forces, the BCI has stated. Bar associations and student bar associations should deprecate any sort of provocative speech against any political leader, the release concludes. 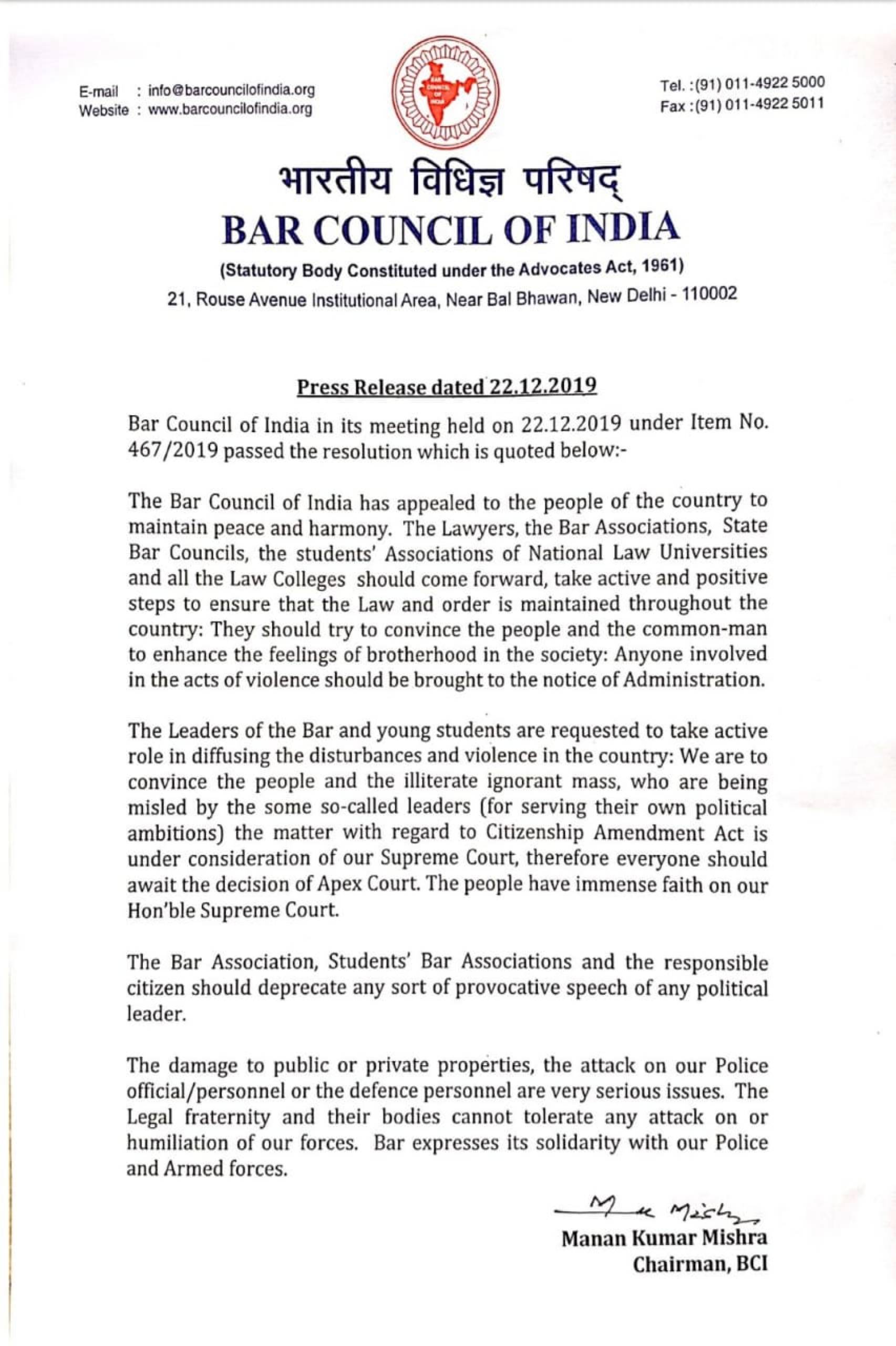 Following the passage of the Citizenship Amendment Act in both the houses of the parliament, the country has witnessed violent protests. The protests have turned violent in many parts especially in Delhi and West Bengal where public property was plundered by the violent mob. However, contrary to the agenda peddled by the left-liberals, the violent mob on multiple occasions have attacked the police.

In Seelampur, the violent mob had assembled in large numbers in an attempt to overpower the police who had only cricket helmets to protect themselves. “I wasn’t expecting that the protest would turn violent in a moment and hundreds of men would turn hostile. They hit us with bricks and stones. We tried to stop them, but they didn’t listen to us,” said Dara Singh, a constable posted with Seelampur police station, who was injured in the Seelampur violence. Singh further added, “I was standing with five to eight other policemen when more than 20 men surrounded us and pelted stones and bricks. Although I was wearing a helmet, a stone hit my left eye and I fell to the ground. I could hear my colleagues trying to pacify the angry crowd, but they were still pelting stones at us. Soon, officers came to my help and took me to the hospital.”

In Lucknow, the violent mob burned an entire police post. A total of 20 motorcycles, 10 cars, 3 buses and 4 media OB vans were torched by the violent mobs in the area surrounding Parvati Chowk in Lucknow. Ahmedabad in Gujarat also witnessed even more disturbing scenes. One of the videos that have gone viral on social media shows a violent, bigoted mob pelting stones at police vehicles and personnel. What is particularly disturbing is the visual of police personnel being cornered by a blood-thirsty mob which then tries to lynch him. A total of 12 policemen have been injured by the murderous mobs in Ahmedabad. Another video from Shah-e-Alam area in Ahmedabad captures how violent mobs cornered some police personnel into one particular corner and then started pelting stones at them indiscriminately.

However, left-liberals, journalists and opposition politicians have largely ignored the case, instead busy churning the ‘brutal crackdown on innocents’ narrative with Delhi Deputy CM Manish Sisodia caught spreading fake news as he alleged that the Delhi Police was attempting to set a bus on fire where in fact, the Delhi Police was trying to douse the fire.

At such a time, Bar Council of India’s expression of solidarity with the police personnel is much reassuring and a slap on the face of liberals.

Rana Ayyub makes sensational claims on Twitter about anti-CAA Muzaffarnagar riots, UP Police takes her to the cleaners

Anti-CAA or Anti-Hindu? A Hanuman Mandir was vandalized by goons during Bihar protests