There are U Turns, this is a whole ring road

by Abhinay Shukla
in Opinions
0

The Citizenship Amendment Bill seeks to provide Indian citizenship to members of communities, in minority in Pakistan, Afghanistan and Bangladesh, that have fled religious persecution. These communities include Hindus, Sikhs, Christians, Buddhists, Jains and Parsis, all of whom are in minority, and whose numbers have fallen drastically in each of the three countries.

This bill aims to end the politically motivated obfuscation of the terms ‘illegal immigrant’ and ‘refugee’ as the two are very different. The bill seeks to undo the historical injustice that has been meted out to Bengali Hindu refugees, among others.

Hypocrisy of the opposition could clearly be busted by the request of CPI(M) then general secretary, Prakash Karat to then PM Manmohan Singh in the year 2012, in which he had demanded the immediate implementation of the CAB. CPI(M) had asked the government to amend the Citizenship Act, to provide Indian citizenship to a large number of refugees from Bangladesh, both before and after its formation. It is said there had been a consensus in Parliament when the National Democratic Alliance was in power at the Centre.

Stalwart of the communist party, Prakash Karat, had drawn attention towards “the citizenship problems of the large number of refugees from erstwhile East Bengal, and then even after the formation of Bangladesh, who had to flee their country in particular historic circumstances on which they had no control”.

Reminding Dr. Manmohan Singh of his speech when he was the Leader of Opposition in the Rajya Sabha during the Vajpayee government that had tabled the Citizenship Amendment Bill 2003, Karat wrote, “With regard to the treatment of refugees after the partition of our country, the minorities, in countries like Bangladesh, have faced persecution, and it is our moral duty that, if circumstances force people, these unfortunate people, to seek refuge in our country, the approach to granting citizenship to these unfortunate persons should be more liberal.”

At the time both UPA and NDA appeared to be on the same page as Deputy Prime Minister L. K. Advani had remarked that he was in full agreement with the views expressed by the Leader of the Opposition. 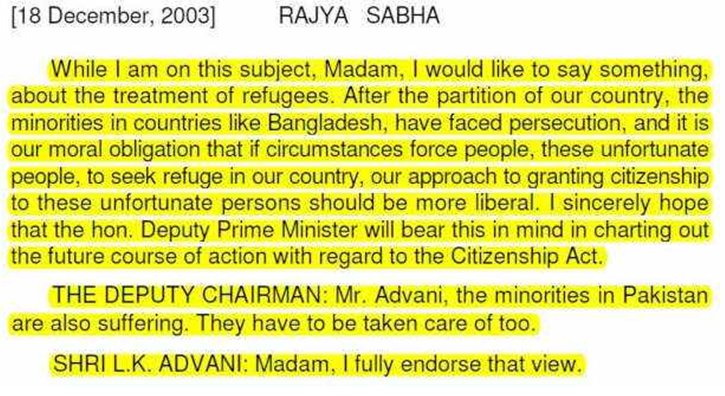 This document of the Rajya Sabha further shows the duplicity of the Congress, when something comes in between them and Muslim appeasement. In the year 2012, then Assam CM, Tarun Gogoi had submitted a memorandum to PM Manmohan Singh, strongly supporting growing demands to grant Indian Citizenship to persecuted minorities of Bangladesh. He pleaded the then PM to not treat persecuted minorities as ‘foreigners’, but rather grant them Indian Citizenship.

Further, in 2015, the Assam Pradesh Congress Committee President, at an executive meeting was quoted as saying, “We will take up the unresolved issue of citizenship for the Bengali Hindus, Buddhists, Christians and people of other minority communities who came to Assam after being subjected to inhuman torture post the partition of India.” The sudden U-turn of the party with regard to CAB cannot be understood by any reasonable person.

Today, the Congress and the CPI(M) oppose the CAB and are weaving a divisive narrative, overlooking difference between illegal immigrants and refugees of religious persecution from Bangladesh, Pakistan and Afghanistan. Now that the bill is closer to being implemented, once passed in the Rajya Sabha, the opposition has taken to fear mongering and lecturing the BJP, accusing it of trying to create a ‘Hindu Rashtra’. The effects of these irresponsible comments may lead to disturbances in the northeast, however, many opposition parties have kept politics above national interest.

Opposition parties such as SP, CPI(M), DMK and TMC in the leadership of Congress are opposing this bill, which will give citizenship to persecuted minority communities of the Pakistan and Bangladesh. With its senior-most leader in Lok Sabha, Adhir Ranjan Chowdhury, objecting to the CAB calling PM Modi and HM Amit Shah ‘infiltrators from Gujarat’. Congress should read the ‘constitutional debates’ in order to understand the meaning of citizenship. Discussion among the prominent stalwarts of the Congress like Rajendra Prasad and PS Deshmukh would enlighten the party from its petty politics.

Even after acknowledging the hypocrisy of the opposition parties, their stooges left no chance to further derail the issue, with Nidhi Razdan deliberately tweeting the definition of Article 14 of the constitution, forgetting that the partition of the country was done on the basis of religion. Pakistan and Bangladesh have a history of systematically persecuting members of Hindu and other Indic religions. Even more interesting is the outcry of the so-called champions of secularism, Tavleen Singh and Barkha Dutt, who rained tears for their losing pseudo-secularism. Strikingly, even the newspapers such as the Hindustan Times calling the bill contentious, this is an clear example of chest-beating in order to showcase their ‘secular credentials’.

Article 14 of the Constitution Of India -“The State shall not deny to any person equality before the law or the equal protection of the laws within the territory of India Prohibition of discrimination on grounds of religion, race, caste, sex or place of birth”

Well said Barkha. This citizenship bill goes against everything that India stands for. Or maybe stood for. This is the ‘new India’. https://t.co/PDXJzdLkdy

Citizenship Amendment Bill is deeply disturbing. To say that only Muslims will not be allowed into India but people of other religions are welcome goes against the idea of India. If persecution is criteria, anyone irrespective of religion, should be considered for citizenship.

Apart from the outcry, it is welcoming that the BJP has shown strength and courage and has finally given a language to that cause and that sentiment of the country and a title to that emotion in the form of CAB. As the Citizenship bill gets cabinet nod, the resolve of the BJP has achieved success. The strong stance taken by the PM Modi and Amit Shah must be lauded, they have yet again showed that they do what they have promised. Amit Shah has fought fiercely against the hypocritical gang of left-liberals and has befittingly showed them how crucial decisions in the interest of the people are made.