Subhash Chandra: The fall of a truly self-made businessman

by Amit Agrahari
in Business

Subhash Chandra, the Chairman of the Essel Group, has been an inspiration for the entrepreneurs of country. Chandra took to his family’s business in early 1970s and built up a thriving 250 crore rupees revenue company by 1990. He came up with the idea to start a television while watching Gulf War on CNN at a Kuwait hotel.

He founded Zee Entertainment Enterprises Ltd (ZEEL) in early 1990s, to make foray into television business. The company has become in pioneer of in private television channels with 19.7 percent of share in all India TV viewership.

The TV business of the Essel Group is performing exceptionally well. It posted revenue of 7,933 crore rupees in FY 19, growing at 12.4 percent annually and profit-after-tax of 1,567 crore rupees. The only competitor to ZEE’s media domination is STAR news which made entry to India’s private television business in 1992.

Subhash Chandra’s venture into media business paid very well and is paying so far. But, other ventures of the company have not performed very well.

In 1999, the company started joint venture with ICO Global to provide wireless satellite communication in the country, but, due to popularity of mobile telephony, the business collapsed.

Another area where the visionary businessman realized the opportunity very early was league matches in cricket. Chandra launched Indian Cricket League (ICL) in 2004, but, BCCI saw it as lucrative business and launched its own league competition. Indian Premier League (IPL) became one of the most successful cricket league in the country but ICL burnt 350 crore rupees from Chandra’s pocket.

But the hardest blow to Chandra’s came from his venture into infrastructure has proved completely fatal. “As most of the infra companies, even we have made some incorrect bids … My obsession of not walking away from the situation has made me bleed Rs 4,000 crore to Rs 5,000 crore,” said Chandra. One wrong move cost the Chandra the controlling stake in the company. 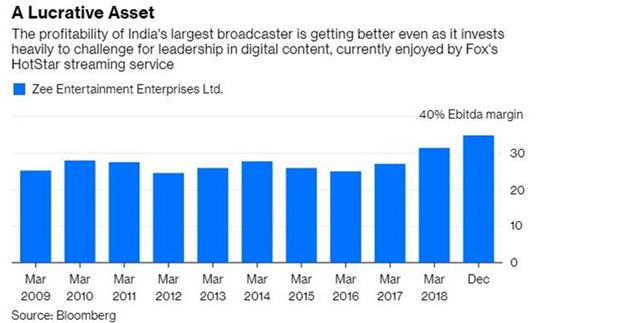 The major lenders from mutual funds industry to Zee Group include Aditya Birla Sun Life MF, HDFC MF, Franklin Templeton, and ICICI Prudential MF. Previously, Subhash Chandra Goel had given a personal guarantee to mutual fund companies when the prospects of defaulting were looming over the group. The investors have been wary of the falling share prices and the prospect for default as far as the future of Zee Entertainment Enterprises Ltd is concerned. To save the share prices from plummeting further, Subhash Chandra had given personal guarantee for payment to mutual funds on an “irrevocable and unconditional” basis.

The loans taken for the infrastructure projects turned NPA. Subhash Chandra has pledged the shares of ZEEL to take the loans and the lenders has right to sell the stakes if the loans were not paid.

Subhash Chandra saw the future of Indian Television & single-handedly created the country’s first media & entertainment empire. One stumble will not deter him & his entrepreneurial courage has always been admirable. May he steer his ship to safe harbour..https://t.co/7E8zFfdOZs

The business community and entrepreneurs believe Chandra will not be deterred by this one blow. “Subhash Chandra saw the future of Indian Television single-handedly created the country’s first media entertainment empire. One stumble will not deter him his entrepreneurial courage has always been admirable. May he steer his ship to safe harbor,” said veteran businessman Anand Mahindra. Given the entrepreneurial spirit of Chandra and the faith placed on him by industry leaders, it is probable that he will bounce back very soon.

In Bihar Assembly, Nitish Kumar and Lalu have already created a Mahagathbandhan