Once Pakistan’s guardian angel, Saudi Arabia is now a major partner of India

PM Modi’s recent visit to Saudi Arabia is all set to bring cheers to the defence industry of India. The oil rich Arab state has decided to collaborate with India in defence sector through newly formed Joint Committee on Defence Cooperation (JCDC). “Saudi Arabia is looking at collaboration with India on defence in terms of procurement and joint production … The talks have been going on for greater defence cooperation and expansion of ties between the two nations for the past six months,” said an Indian official posted in Saudi Arabia. 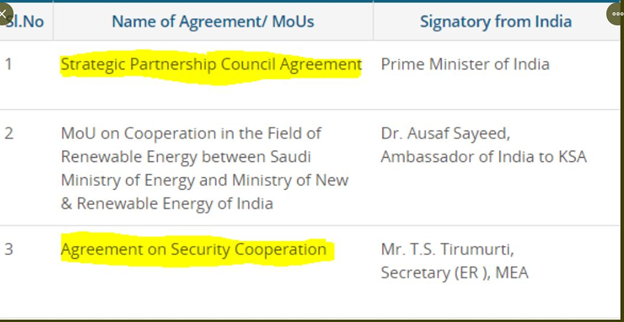 Also, the two countries will hold joint naval exercise in Gulf region by 2020. The increasing military cooperation between India and Saudi Arabia will disturb the Pakistani military establishment which has been major defence ally of Riyadh for decades. In fact, former Pakistani Army chief, Raheel Sharif is leading the Saudi campaign against Houthi rebels in Yemen. But the joint naval exercise and Saudi’s stance on Kashmir suggest that Riyadh wants to enhance ties with India.

Saudi Arabia is also interested in buying small arms, military vehicles, and radars from India. Indian companies- Ashok Leyland, Bharat Forge and Ordnance Factory Board (OFB) participated in the recent JCDC meeting to discuss defense exports to United States. “The Saudi have found traction in what India is manufacturing and what they want to buy,” said an official.

Saudi Arabia is the world’s largest arms importer and access to its market would immensely help India’s nascent arms industry. As of now, India is the world’s second largest arms importer after Saudi Arabia. According to a report published by Stockholm International Peace Research Institute (SIPRI), “India was the world’s second-largest importer of major arms in 2014–18 and accounted for 9.5% of the global total.” Defence imports sucked a large chunk of India’s foreign exchange and were responsible for severer stress on public finances of the central government.

Modi government wants to make India self-sufficient in defence industry. In the last few years, it has aggressively pushed for Make in India in the defence sector; the government liberalized FDI norms and opened the sector to private players in order to increase competition.

Benefitting from government’s Make in India policy, the country is set to exceed the target of 35,000 crore rupees export target of defence products. “I expect the exports will surpass the target of Rs 35,000 crore by 2024-25,” said Defence Production Department Secretary Ajay Kumar.

In this budget, 50,000 dollars were allotted to promote export of defence products manufactured in India. Defence attaches (a military expert who is attached to a diplomatic mission) across the world have been asked to submit a detailed action plan to promote Indian defence exports in their respective countries. The countries are categorized as A, B, C according to the prospect for exports and the attaches will get money as per this categorization.

The DPP-2018 aims to invest adequate sources to develop critical technology for manufacturing state-of-the-art military platforms including fighter jets, attack helicopters and weaponry indigenously. According to the draft policy, the government is looking at achieving a turnover of Rs 1.7 trillion (Rs 1, 70,000 crores) in military goods and services by 2025.

The draft aims to raise FDI cap in niche tech to 74 percent. A higher FDI in the sector will boost local manufacturing and catapult India into the league of nations housing top defence and aerospace industries. The policy aims to make India one of the top five manufacturers of defence platforms with the active participation of public and private sectors.

Arguably the most beloved Youtuber of India, Narayana Reddy is no more. But what he did will linger forever