Newswire
Data of 142mn MGM hotel guests selling on Dark Web for Rs 2 lakh 34 mins ago
India records highest single-day spike of 29,429 cases 37 mins ago
Former MLA’s thatched-roof house collapses but he is not complaining 37 mins ago
Eng set to postpone September’s white-ball tour of India to 2021: report 43 mins ago
AMU girl receives threat of being forced to wear ‘brass hijab’ 43 mins ago
Markets open on a positive note Wednesday morning 46 mins ago
Next
Prev

In the last few days, a series of reports were published by ex-Business Standard journalist Nitin Sethi on the misuse of electoral bonds by the ruling party. These reports, published in the Huffington Post argued that the ruling party tweaked the rules regarding the electoral bonds, in order to generate donations during the various assembly elections in 2018.

The tirade Electoral bonds are misplaced and handiwork of the alliance of the defeated and dejected. The Electoral bonds were at an attempt by the NDA government to clean up the political funding. The first term of Modi government was characterized by the fight against black money- initiatives like Demonetization, Income Declaration Scheme and Electoral bonds, were steps in the process.

The launch of electoral bonds should not be seen in isolation; it was among the series of steps taken to eradicate black money and end the vicious nexus of corruption and political patronage. BJP has always tried to push for transparency in political funding. BJP’s intention to clean up the political funding was visible in the first NDA government, which exempted political funding from Income tax, in order to bring more corporate funding for the political parties and end the ‘necessity’ to use of black money. The Modi government brought down the limit of cash funding to 2,000 rupees from the erstwhile limit of 20,000 rupees.

The questions on the legality

The 5 articles, which formed the Paisa Politics series by Nitin Sethi were published with factually incorrect headlines like ‘Modi PMO Ordered Illegal Electoral Bond Sale Before Vital State Polls’. The whole Electoral Bond issuance matter was ‘perfectly legal’, the Supreme Court of India itself sanctioned the legality of electoral bonds. All the apex court asked was, ‘to furnish the details in a sealed envelope to poll panel’.

Why the government opened Window before the assembly election

The other question raised by Sethi was that why the government asked the SBI to open the Electoral bond window in the months other than sanctified in the original proposal (Jan, April, July, October-start of every quarter). This is a stupid question to ask why the government asked SBI to open the window before the assembly polls. The political parties need money before the election. Now, they have two options- collect black money for the electoral funding or take money through electoral bonds. BJP preferred to go with the latter because it wanted to keep the political funding clean.

The journalist, in the articles, argued that the government ignored the ‘questions’ raised by RBI and Election commission. But, this argument falls flat on facts: Electoral bonds were proposed in the finance bill- February 2017, provisioned in March budget 2017, and then finally launched early 2018. In the 9 months, the finance ministry and PMO held extensive discussion with RBI and Election Commission and addressed every issue proposed by them.

Use as Currency and of Currency

The RBI argued that electoral bonds will be used to park cash. The government made a provision that only tax paid cheque can be used to purchase electoral bonds, these bonds could be purchased only from selected branches of SBI and the bank carries out a detailed KYC (Know your customer) of the donor.

To prevent the use of electoral bonds as a currency- the government made a provision that the purchased bonds could be contributed only in a limit of 15 days, after that the bond money will be automatically deposited to the PM relief fund. These measures will also stop the window for shell company donations to political parties. The money could be deposited only to the registered and qualified political parties; therefore, the crooks have ‘no way’ to use electoral bonds to park black money or use it as ‘currency’.

It’s not a scoop

The so-called ‘scoop’ by the journalist is not revealed from any document that government tried to hide, but, all the documents were availed through RTI which means that the government has already put all ‘sources’ in public domain.

With the electoral bonds in place, the parties have ‘transparent’ system of funding and the political parties no longer need ‘bag loaders’. 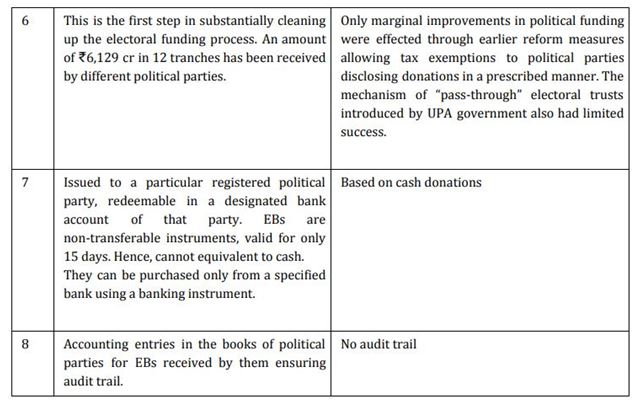 Piyush Goyal, Minister of Commerce and Industry, in a half an hour long press conference, rebutted all the claims made by the journalist. In the press note released after the press conference, the party compared the previous system of political funding and the new system of political funding. The advantages of electoral bonds system has already been explained in the table above.

In the press conference, Piyush Goyal highlighted that Electoral bonds have brought transparency and accountability to the system and that the opposition is the handiwork of the alliance of the defeated and the dejected.

He also said that Electoral Bonds is in the same trajectory of electoral reforms to bring transparency and remove black money from the system, however, now people who want to be a part of the political process but are scared of political retribution will be able to contribute. “Electoral bonds have a KYC mechanism while the old system had no way to assess donor credentials,” added Mr Goyal, who was a long-time BJP treasurer and raised the issue of transparency of political funding even then.

‘Is Tanhaji Also a Naagin?’, The Quint goes completely bonkers over Tanhaji trailer