Yogi Adityanath sets target of $1 trillion economy for Uttar Pradesh by 2025, to compete with Maharashtra

On the occasion of half-term completion of the Yogi Government, the government expressed that it has created 20 lakh private and 2.5 lakh government jobs in a span of last 2 and a half years, and the other half will be dedicated to achieving $1 trillion economy goal. “The remaining 2.5 years of my regime would be dedicated towards accelerating the various programmes for achieving the $1 trillion target,” he said.

Yogi Adityanath said that the state will be the ultimate beneficiary of the central government’s historic corporate tax reform, which was announced in the same week Yogi government completed its half term. “We have adequate land bank and connectivity, apart from new policies in all 21 key sectors, which coupled with the various tax sops announced by the Centre would position UP as the most favoured investment destination in India,” said Yogi Adityanath.

UP now aims to compete with Maharashtra– the most productive state in the country to become the $1 trillion economy by 2025.

The perception of UP has changed dramatically in the last few years. The state has got an investment of 2 lakh crore rupees in the last 2 and a half years of Yogi Government.

The government is brainstorming on the plan of becoming $1 trillion economy, with IIM Lucknow providing mentoring sessions to Yogi’s Council of Ministers and bureaucrats in management and governance.

Amid economic slowdown and subdued industrial growth in the country, Uttar Pradesh has undoubtedly performed better.

In June, the industrial output of UP grew at 3.2 per cent compared to the Indian average of 2 per cent. The electricity consumption has saturated in the Western and Southern states, but, UP’s electricity output expanded by 8.7 per cent. 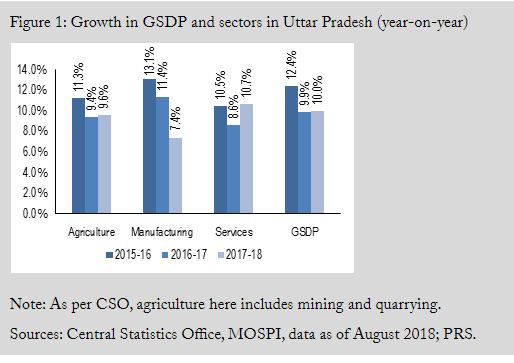 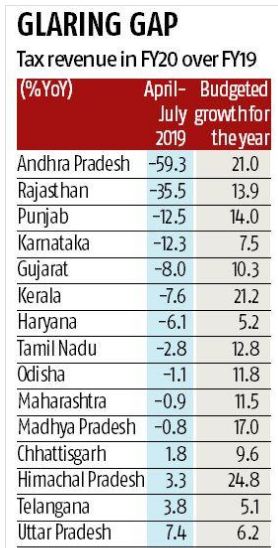 In FY 19, the tax revenue growth of many states was in red in the first four months with Andhra Pradesh and Rajasthan performing worse at 59.3 per cent and 35.5 per cent decline respectively. But the tax collection in UP grew at 7.4 per cent against the targeted estimate of 6.2 per cent.

In recent decades, the economy of Uttar Pradesh couldn’t grow at a good pace due to lacklustre administration of the Samajwadi Party and Bahujan Samaj Party. On the other hand, neighbouring states like Bihar, Madhya Pradesh registered the double-digit growth in the same time-frame given the good governance of NDA governments.

The Yogi government has aggressively pursued economic growth. The Yogi government in Uttar Pradesh had organized a groundbreaking ceremony for projects worth Rs. 60,000 crores (8.47 billion dollars) on 29th July in the presence of PM Modi.

In this summit, PM Modi said that Uttar Pradesh government can compete with Maharashtra to become the first Indian state with a trillion-dollar economy.

Last month, the government announced that 25 per cent rebate on land as well as a discount of electricity will be given to companies to attract investment for the defence industrial corridor, planned across in six districts of the state.

The defence corridor is expected to attract investment worth 20,000 crore rupees and create 2.5 lakh jobs.

The latest projects will immensely contribute to the economic growth of the state. The pro-business stance of the Yogi government has encouraged investor’s confidence in UP. Recently, many multinationals like Ikea, Vivo, and Samsung have made investments in the state. Under the effective leadership of Yogi Adityanath, the rule of law prevails in the state and terms like corruption and Gunda Raj have become obsolete.

PoK residents cross over to Kashmir to show ‘solidarity’, Imran Khan disowns them

‘This is an act of invasion by Hindus,’ the left-liberal cabal has a massive meltdown over J&K land reforms