Newswire
India Inc rolls out the red carpet for Bezos even as Modi govt shuns him 1 hour ago
SC asks Centre to examine plea for KVs in every tehsil 1 hour ago
Rajkot knock Rahul’s best in international cricket: Kohli 1 hour ago
ED raids ex-BMC official, recovers papers of Dubai property 1 hour ago
Delhi Police chief given powers to exercise NSA for 3 months 2 hours ago
68% give approval rating to AAP govt’s performance: LocalCircles 2 hours ago
Next
Prev

Tazia procession has NEVER BEEN a part of BHU’s ethos. And it’s a desperate attempt to secularize it

In fact, among the prestigious universities of the country, the Banaras Hindu University (BHU) in Varanasi was crowned in the name of secularism. This was perhaps the first time in the 102 year long history of BHU, that the Tazia procession walked around its campus. It is written in clear letters on the Singh gate that ‘this is not a common road’, yet the Tazia procession marking the mourning of Muharram was carried out on this road. This Tajiya procession was taken from Singh Gate via Chitupur Gate to Faculty of Law, MMV in the BHU campus. In such a situation, the question that arises is that when this has not happened in the history of BHU till date, then what was the need to give birth to this new tradition today?

In this case on social media, people have been raising questions over the silence of Vice Chancellor Rakesh Bhatnagar. Many students protested on Facebook, while many took to Twitter.

Expressing anger over the matter, a twitter user wrote, “Can any #Hindu be allowed to take out Krishna Janmashtami or Kavad Yatra at Aligarh Muslim University ?????”

At the same time another user said that “Can an idol of Maa Durga be installed in Navratri in AMU? no. Then how can Tazia roam in BHU. ” On Facebook, a student expressed his anger, wrote, “After all what is the work of this tazia in university today? … If this has not happened in the history of the university till date, why should this new tradition be born today?” 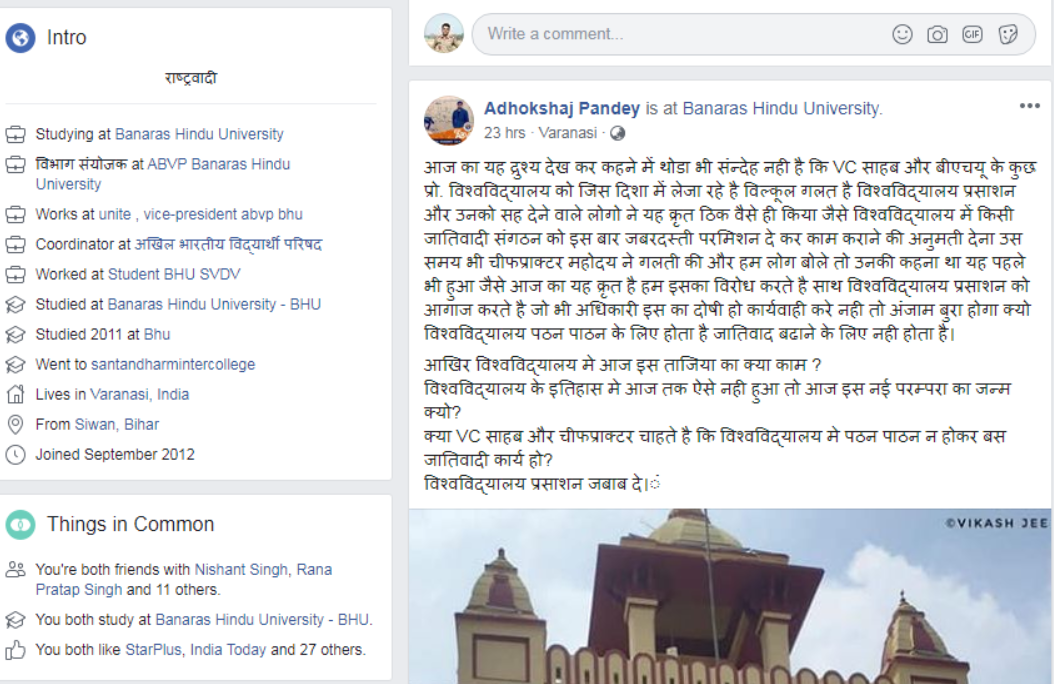 Critics even went so far as to say,  “In BHU, this is clearly a mockery of Mahamana’s values. When a procession of another religion is not allowed, then why was a religious procession of a particular religion allowed? Is this university a dharamshala that anyone can walk in whenever they want?” 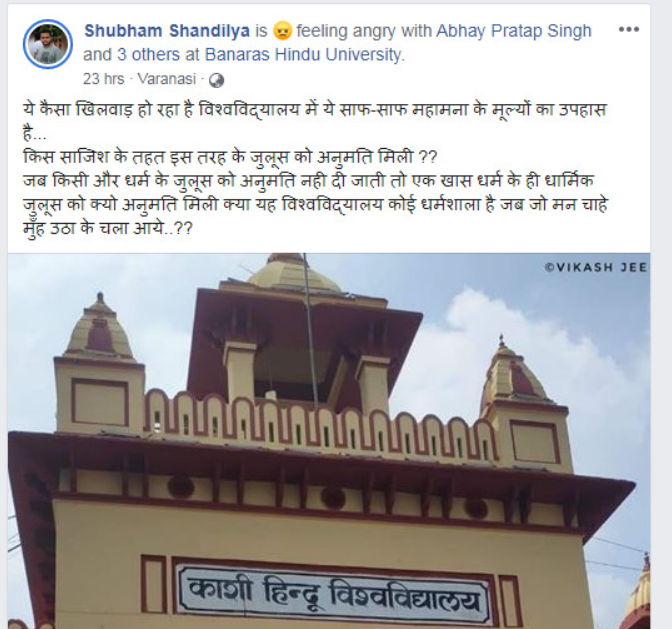 The matter caught up further when students of BHU students and professors started protesting against the Tazia being rolled out in the school premises. The students staged a sit-in at the Chief Proctor’s Office and demanded a moratorium, blaming the university administration for this. The students allege that along with raising slogans during the Tazia procession, sharp edged weapons were also waved about while the BHU security personnel watched. The Chief Proctor assured of action as per the rules when the students returned. Along with this, Chief Proctor OP Rai has also clarified that this tradition is old.

It seems that either OP Rai may be in support of of the Tazia procession or he has received orders from above to let go of this issue. In fact there is no such tradition in BHU but efforts are being made to turn this into a tradition. This is the case when the vice-chancellor of BHU is Rakesh Bhatnagar who is a former JNU professor. In 2016, Rakesh Bhatnagar was employed as a professor when anti-national slogans were raised on the anniversary of terrorist Afzal Guru in JNU. And now, as soon as he becomes the vice-chancellor, he has allowed the Tazia procession without giving any explanation for it.

In a January 1920 convocation speech, Madan Mohan Malaviya had said for the Banaras Hindu University, “We should make Kashi the holy land of supreme civilization, for which it was so famous in ancient times… We should build this university in such a way that its step foot land gives an idea of ​​ancient pride and civilization. ”(Book- Mahamana: Chintan and Sandesh, Dr. Umesh Dutt Tiwari)

Let us know that BHU has been the center of education and culture for years, which has been completely different from JNU, Aligarh and Jamia University. But today this ‘Sarv Vidya ki rajdhani‘ is being used to advance an agenda inimical to the atmosphere of an educational institution. The university administration and the state government must ensure that such an incident does not happen again.

Pondy Lit Fest, a platform that the left tried to kill, is back with a bang!

Sri Lanka has imposed a very strict Madrassa regulation. India needs to learn from them

Brus are legally, socially and culturally citizens of India and the Govt has released massive funds to resettle them