HOME » Economy » Done making jokes on Nirmala Sitharaman’s “Ola-Uber” remark? Well, the joke is on you

Done making jokes on Nirmala Sitharaman’s “Ola-Uber” remark? Well, the joke is on you

Exactly four years ago on September 10, 2015 veteran entrepreneur and Mahindra Group chairman made a prophetic statement about the automotive industry. “The age of access being offered by taxi-hailing apps like Uber and Ola is the biggest potential threat to auto industry,” said Mahindra. “A lot of youngsters who can own vehicles today don’t want to own one, but only need access to transportation,” he added.

Yesterday, finance minister Nirmala Sitharaman made a similar statement while addressing reporters in Chennai. “The automobile and components industry has been affected by BS6 and the mindsets of millennials who now prefer to have Ola and Uber rather than committing to buying an automobile,” said Nirmala Sitharaman.

The Twitter warriors, newly converted industry experts, and opposition created a furor over the statement of FM Nirmala Sitharaman. Spreading gyaan on Twitter is okay, but we should look for ‘empirical evidences’ to support or nullify the claim made by Finance Minister Nirmala Sitharaman.

The aim of ride sharing services

Almost a decade ago, when Travis Kalanick, founder and former CEO of Uber started the ride sharing business, he had one aim: to stop people from buying cars. In an interview with Wall Street Journal he opined to “Make car ownership a thing of the past” and get more people in fewer cars.

The primary aim of any shared mobility company is to end the ownership of cars and encourage ‘sharing and hiring’. Ride sharing has registered exponential rise in last few years with Ola and Uber being at the forefront of it. The concept of shared mobility is not limited to four wheelers, now Bike and auto-rickshaws can also be hired through apps like Rapido. And therefore it is obvious that with the rise of shared mobility, the ownership will register decline.

Deloitte, the global consultancy published 2019 Global Automotive Consumer study in June. As per this study, shared mobility is gaining currency among the youth of India. Another report by Morgan Stanley predicted that the share of shared mobility in the total miles traveled will reach 35 per cent by 2030 and 50 percent by 2040.

According to studies, sharing a car is cheaper than hiring. The social status attached with ownership of car is a thing of the past and youth is more focused on efficiency. “Social barriers are breaking. My friends who could not think of getting off their Mercedes are happily taking Ola-Uber,” says a 25-year old office goer working in Bangalore

The newspapers have published articles about the efficiency of sharing compared to ownership since last few years.

According to an article published in Economic Times in November 2015, one can save 50,000 to 1, 00,000 rupees per years by using shared mobility. The article was titled ‘Should you buy a car in the age of Uber and Ola?’

Another article published on April 30, 2016 in the same newspaper openly argued against ownership of cars, and it was titled ‘Don’t buy a car, just share an Ola or Uber cab, it makes more sense’. 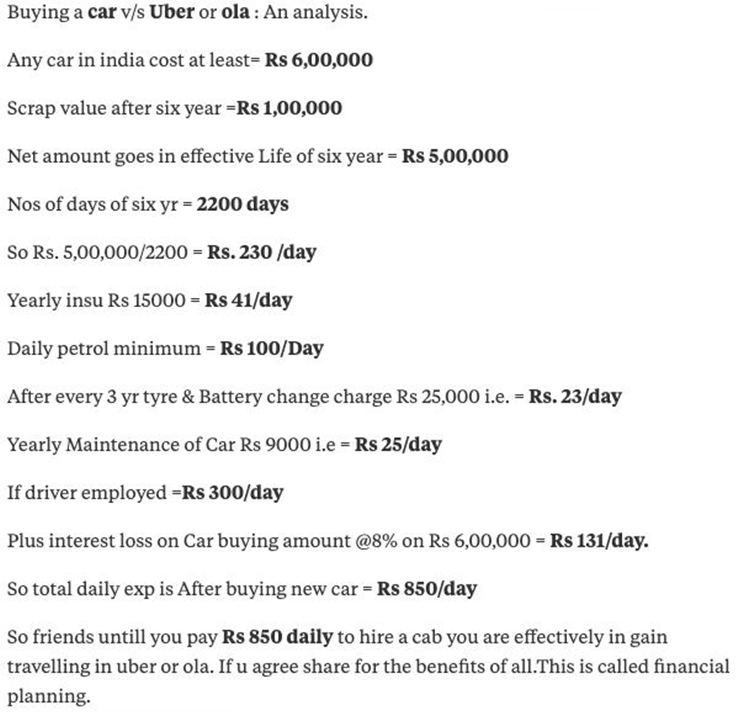 The above image is a post by a Quora user who had estimated the cost of car ownership and sharing. This does not present the exact picture but it gives a rough idea of the difference, and is pretty close to the views of experts who published in prominent newspapers like Economic Times and Business Standard.

The newspapers are very open about the fact that ride-sharing apps disrupt the car market. An article published in Business Standard on November 2018 was titled ‘After Ola and Uber, another start-up ready to disrupt India’s car market’. “After the Ubers and Olas of the world, there’s some more competition to car ownership,” is the first line of the article.

RBI published a study titled ‘What Drives Automobile Sales? It’s not Credit’ dated April 25, 2019 in which it called “exogenous policy changes such as vehicle insurance and the maturing of the ride-hailing services segment” responsible for slowdown in Automobile sector.

According to an RBI study, Ride-hailing service is turning out to be a double whammy for the automobile sector in last few years. The launch count of ride hailing services across cities registered exponential rise from 2012 to 2014 and this was accompanied by rise in taxi registration in these cities. The taxis comprised 6 percent of total four wheeler registrations in 2016. Thousands of people purchased four wheelers to lease them for taxi services.

The steps the automobile leaders are taking to protect the business

The Global status of Automobile Industry

Financial Times, the business newspaper which is considered essential reading for economists, policy makers and corporate executives published an article titled ‘Car industry drags global manufacturing into sharp slowdown’ on September 9. According to the article, car industry is at the center of gloom in manufacturing. The automobile industry has registered a sharp slowdown in countries around the world and this poses major threat to countries like Germany whose economy is dependent on automobile manufacturing. 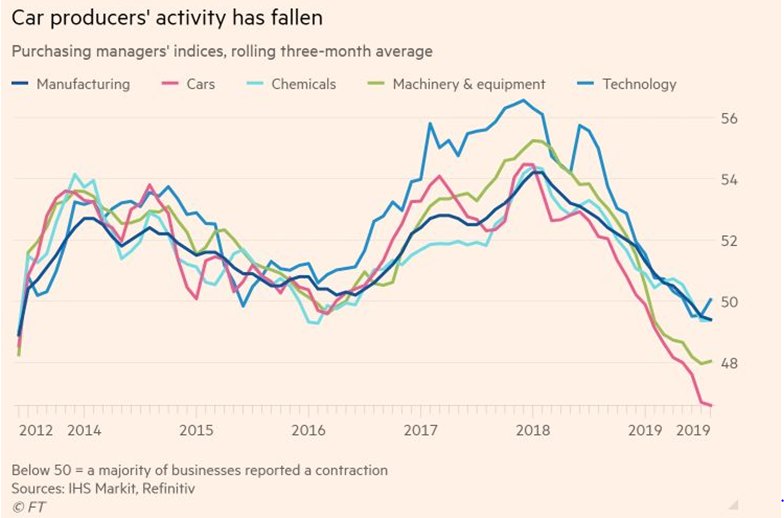 New companies are emerging every month in the ride sharing sector. “There exists a large market for mobility services that are below the price point of Uber and Ola, especially comprising of corporate employees,” said Nitin Chadha, cofounder of sRide which collaborated big IT firms like Capgemini, Infosys, Wipro and Tech Mahindra to provide car services to employees. Some other startups include Drivezy and Zoomcar. Therefore the automobile companies have to launch cars which offer all around experience rather than ones used as essential commodity of daily life- used for travelling.

In last few years, there has been a plethora of research which vindicates the statement of finance minister Nirmala Sitharaman on slowdown in automotive industry. The twitter trolls and the the dolts who have an opinion on everything ranging from macroeconomics to social science should read the studies, statements of industry experts and people like Anand Mahindra who have skin in the game, before criticizing the statement of FM Nirmala Sitharaman.

The secular nincompoop – Digvijaya Singh wishes Happy Muharram to everybody