Modi government’s efforts to improve India’s tourism infrastructure has shown some concrete results. The country has moved six places in global Travel and Tourism (T&T) competitiveness index. In 2017, India was ranked on 40th position but this year, ranking improved to 34th. “India, which accounts for the majority of South Asia’s T&T (travel and tourism) GDP, remains the sub-region’s most competitive T&T economy, moving up six places to rank 34th globally,” said the report by World Economic Forum.

India is the only lower middle income country to make into top 35, because it showed greatest improvement Travel & Tourism Competitiveness Index (TTCI) score. In sub sections, India was ranked 8th in cultural resources, 14th in natural resources, 33rd on air infrastructure, and 28th on  ground and port infrastructure. 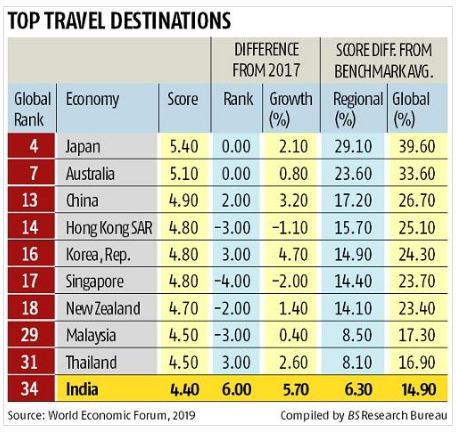 The countries from Asia which made into top 35 include Japan, China, Kora, Singapore, Malaysia and Thailand. The Islamic Republic of Pakistan is among the least competitive countries in Asia with 121st rank in overall competitiveness and 134th in safety and security conditions.

The previous governments did not make serious efforts to exploit the potential of tourism industry. PM Modi-led government is very serious about developing India as a major tourist destination in the world, and it has taken series of steps to improve the infrastructure.

The government introduced its Visa on Arrival enabled by ETA facility for tourists and business visitors, to citizens of 30 countries including America, China, Great Britain, Canada, and Germany. The government has also allowed 100% FDI in tourism construction projects, including the development of hotels, resorts, and recreational facilities.

The Indian tourism industry holds great potential, and is unexploited. The major problems faced by Indian tourism are the low level of formalization in industry, lack of ATM penetration and so on.

The World Travel & Tourism Council expects the Indian Tourism industry to become the fourth-largest behind China, the U.S and Germany in less than 10 years.

As of August 2017, India has 36 World Heritage Sites that are recognized by UNESCO. These are places of cultural or natural importance as described in the UNESCO World Heritage Convention of 1972. The political boundaries of India encompass a wide range of eco-zones—desert, high mountains, highlands, tropical and temperate forests, swamplands, plains, grasslands, areas surrounding rivers, as well as archipelagos. It is among world’s most bio diverse regions, with three of the most distinguished regions for tourism in India being the Western Ghats, Himalayas and Andaman Islands.

Tourism industry is not confined to only leisure and recreation; there are also fields like environmental tourism, cultural tourism, health tourism etc. India has a lot of potential, particularly in the field of medical tourism, and many people from Gulf countries, Australia, New Zealand and Iran visit India to get treated from serious diseases because medical facilities are cheaper in this country. Similarly, Indians living throughout the world visit India regularly because India has the privilege of being the land of pilgrimage sites of many religions. Many people from Asian countries like Japan. Myanmar, Sri Lanka come India to visit holy Buddhist sites located here.

After India’s snub to China, Chinese FM cancels his visit to India to ‘save face’