On Wednesday, the government decided to cap foreign investment in digital media to 26 percent- same as for print media. “The extant FDI policy provides for 49% FDI under approval route in Up-linking of ‘News & Current Affairs’ TV Channels. It has been decided to permit 26% FDI under government route for uploading/ streaming of News & Current Affairs through Digital Media, on the lines of print media,” reads the Press Information Bureau release.

The domestic news entities have welcomed the government decision to cap FDI in digital news at 26 percent, as this ensure level playing field for Indian news sites. So far, there has been vacuum in FDI policy with regard to digital media, and this led to proliferation of Chinese investment in the sector.

The new FDI norms on digital media will benefit the domestic media entities. The Chinese media outlets and aggregators, which ate into profit of home-grown companies, will be out of competition very soon. 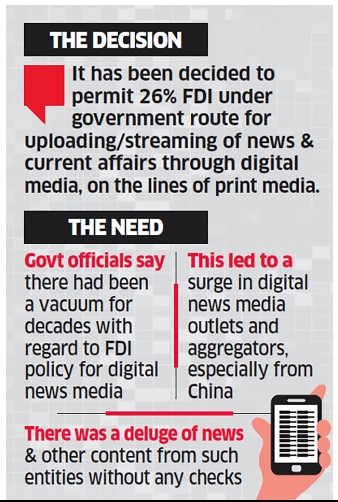 Media is a sensitive sector, therefore, such a large-scale Chinese presence in sector could pose huge threat to the country in abnormal times. FDI in news has been highly regulated due to sensitivity of the sector.

“The government has provided much-needed clarity on FDI in digital news outlets. This has been rightly kept on par with FDI in print media. This provision is likely to apply to all those who disseminate news through digital media in any form. The policy should cover aggregators of news as well,” said Former secretary in the Department for Promotion of Industry and Internal Trade (DPIIT) Ramesh Abhishek .

The Chinese companies are aggressively investing in Indian news aggregators and other digital news platforms. But digital news outlets are tightly controlled by Chinese government in their own country including ban on Facebook and Twitter.

Major news aggregators in the country, UCNews (owned by Alibaba), Opera (whose largest shareholder is Beijing Kunlun Tech Co Ltd) and NewsDog (incubated in China and funded by Tencent) are owned Chinese entities. In last few years, the news aggregators have grown through leap and bounds, the millions of dollars of Chinese has enabled them to spent crores of rupees in marketing.

The new norms will help the domestic digital news companies to grow and attract more eyeballs. The news aggregators severely hit the business of media outlets, as they got link clicks on the original stories of other media platforms. The companies, which created original stories got a very small return on the clicks.

The existing media companies which have a digital arm might restructure the organizational structure to reap the benefits of 26 percent FDI. “Print and TV companies, which have digital platforms will restructure their digital business and create an independent subsidiary,” said Jehil Thakkar, Partner and Head, Media and Entertainment Practice, Deloitte.

The new norms are beneficial to the outlets with minimal foreign investment and therefore the domestic media companies have stood in support of the union cabinet’s decision.

Urmila claimed that her Kashmiri husband was unable to contact his parents. Twitter users punctured her claims

The scenario after the merger of banks and the reason, rationale and arithmetic behind it

‘We request you for the Sanjeevani,’ Brazil invokes Bhagwan Hanuman and Ramayana in request for HCQ

We will buy all your medicines, please give us HCQ: Trumps administration requests Indian companies

“We don’t want to be bracketed with China,” India shows China its place in terms of medical export quality