by TFIPOST News Desk
in Trending
8

The left ecosystem got entrenched in India with the advent of the Jawaharlal Nehru government in the 1950’s. Supported with state patronage, it has been systematically driving out opposing viewpoints from social institutions. Academics have been the biggest victims of this ‘organized genocide’ so much so that by 1990’s, the presence of views in oppostion to the left were virtually non-existent in the country’s institutions.

However accompanying this ‘organized genocide’ was the rampant misappropriation of funds; where the resources meant for the education of the poor and needy were diverted off by ‘champagne socialists’ to lead comfortable lives while the Indian youth was kept away from the much needed quality education.

Recently surfaced facts regarding Nalanda University, Rajgir, Bihar during the Manmohan Singh government , raise hard questions on his supposed clean image and the conduct of Left wing ‘intellectuals’. Times of India journalist, Bharti Jain, has made shocking claims about the management of Nalanda University and the utilization of funds. She tweeted:

Further investigation has revealed that the controversy is not only limited to the appointment of family members of ex- PM Manmohan Singh and Amartya Sen but according to an audit report by CAG, several incidents indicate towards  the accommodation and perpetuation of benefits to certain individuals. According to the report of the Comptroller and Auditor General of India for the financial year ending in March 2016.

“Regular Governing Board was not constituted by the Ministry as provided in the Act. The endowment committee, though formed was ineffective. The University failed to frame rules and regulations for appointment of academic staff and there were irregularities in appointment of Vice Chancellor and OSD (University Planning). The Vice Chancellor and OSD (University Planning) were given undue reimbursement of income tax amounting to 57.40 lakh. The University failed to establish schools in time and could not start the construction of University campus work.”

Important Findings in the report indicate towards widespread misconduct. The Report also includes prominent names like Amartya Sen’s. It says, “Professor Amartya Sen was appointed as Chairman of NMG (Nalanda Mentor Group). Audit examination of records of the MEA revealed that though NMG was required to submit final recommendations in a Report to the Government of India within a period of nine months from its constitution, the report was not submitted even after three years (2007 to 2010) of its constitution.” 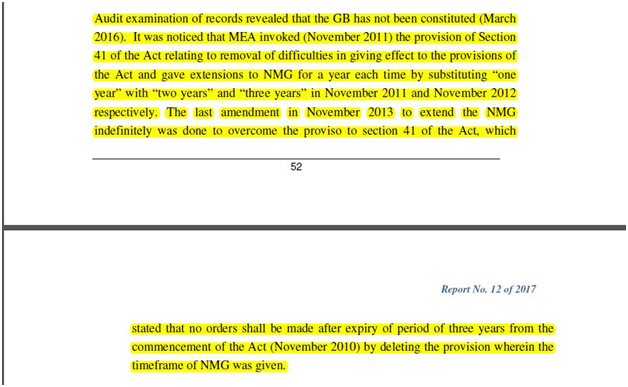 “Irregularities noticed in non-finalization of terms and conditions of appointment of academic personnel, Vice-Chancellor, Officer on Special Duty, and establishment of schools…Audit examination of records of the University and Ministry of External Affairs revealed irregularities in appointment of various post.” 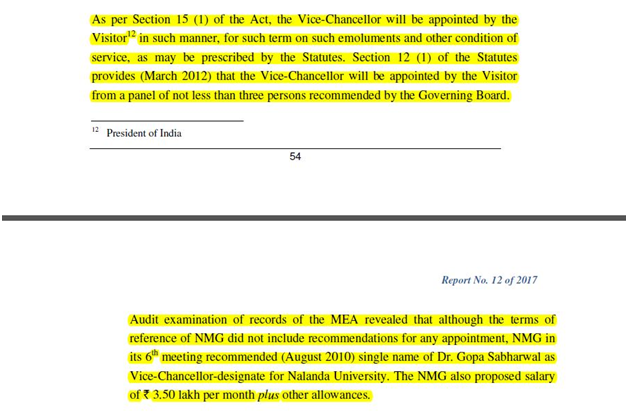 “Dr. Gopa Sabharwal that the competent authorities have accorded approval for appointment as Vice Chancellor-designate with salary of 2.00 lakh per month plus other allowances.” 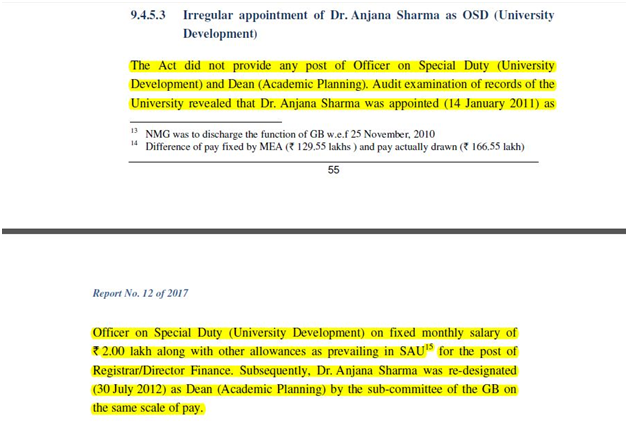 The Report also pointed at the undue benefits of around 57 Lakhs given to Gopa Sabharwal, VC and Dr. Anjana Sharma, Officer on Special Duty.

Even infrastructure suffered under the management of the university during that period:

This is a striking example of quid pro quo that has existed between the Left ecosystem and the Congress, where Congress has turned a blind eye to the blatant misappropriation of funds to benefit certain selected individuals. The probability of the misappropriation of funds in Nalanda university being an isolated incident is low. This surely calls for an inquiry in this case and other cases which could have been shoved under the carpet under previous regimes.