Yesterday, speaking at an event in Delhi, Congress president Rahul Gandhi stated that all the CRPF jawans, killed in the Pulwama attack, will be given “martyrs” status if the Congress party is voted to power in 2019 Lok Sabha elections.

Firstly, CRPF does not come under paramilitary forces in India but is one of the five CAPF (Central Armed Police Forces) as reclassified by the Home Ministry from March 2011 onwards. Moreover, by a notification dated 22nd December 2015, by the Ministry of Home Affairs, The Ministry of Defence has informed that the word ‘Martyr’ is not used in reference to any of the casualties in Indian Armed Forces. Thereby, conclusively proving that the CRPF jawans are being treated at par with all the soldiers in the Indian Armed Forces. 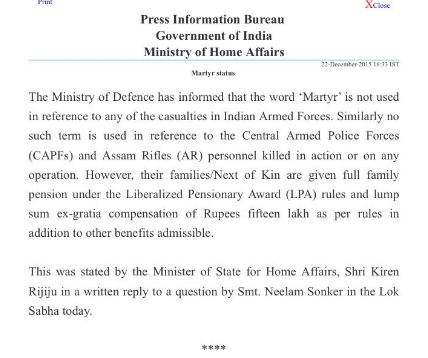 Another question that arises is; why Congress party and mainstream media is so rigid on martyr’s status, is it the economic benefit? If that’s the case then the same notification states that the families of the Indian Armed forces personnel would be given full family pension under the Liberalized Pensionary Award (LPA) rules and lump sum ex-gratia compensation of fifteen lakh rupees as per rules in addition to other benefits admissible.

Above mentioned points concluded the fact that ‘martyr’s status’ has been revoked as par the armed force’s casualty is concerned. Now let’s discuss the elephant in the room and i.e. who is doing ‘Khun Ki Dalali’ here? Isn’t it a case of politicization of terror attack? Has Congress no regard for national security and the mood of the masses?

At the time when the whole nation is mourning about the atrocious attack, Congress president is busy in peddling propaganda over the soldiers. Prior to this many Congress leaders and liberal media establishment tried to demean the attacks and went all guns blazing to shift the narrative of the nation away from the attacks. It appeared that the ‘elite cabal’ is siding with the narrative of Pakistan.

Pakistan too responded in the same way. In what can be termed as a disgrace for the Congress party, in a panel discussion on Samaa TV, a Pakistan based news channel, a panelist claimed that Congress party will secure victory in the upcoming Lok Sabha election. The Pakistani panelist on Samaa TV was spitting venom against India throughout the interview, criticized Prime Minister Narendra Modi but interestingly wished for the victory of the grand old party in the upcoming Lok Sabha election.

One wonders if there is any sense of moral righteousness left within the grand old party. Electoral drubbings have made it a desperate political outfit which can stoop to any low in order to gain publicity.