by Deeksha Srivastava
in Opinions
0

Prime Minister Narendra Modi always stays in the news for his disciplined lifestyle and rigorous work routine but he never disappoints the paparazzi with his impeccable sense of dressing. He has a penchant for dressing himself according to the occasion. His style earns fawning praise from his audience and has created a sense of anticipation among his followers both on social media and real lives. 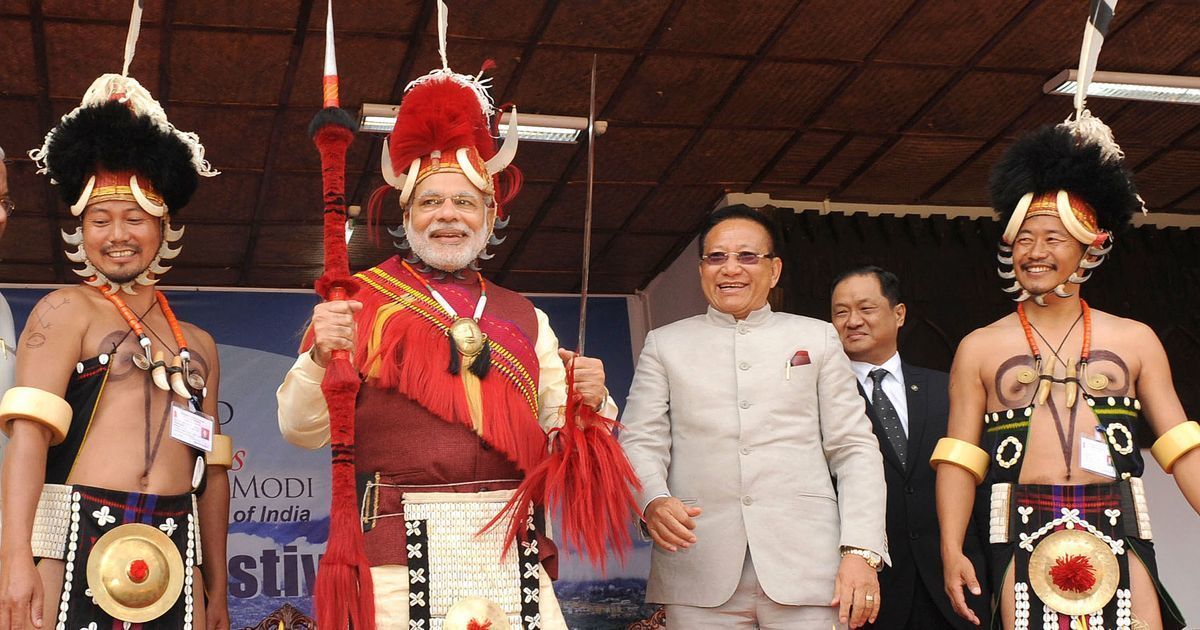 From classy bandhgala jackets to regional outfits, colorful tunics, vests and ceremonial turbans, not only clothing but he is also a fan of accessories. His Bvlgari spectacles frames, Movado watch and Mont Blanc pens collection add to his personality. 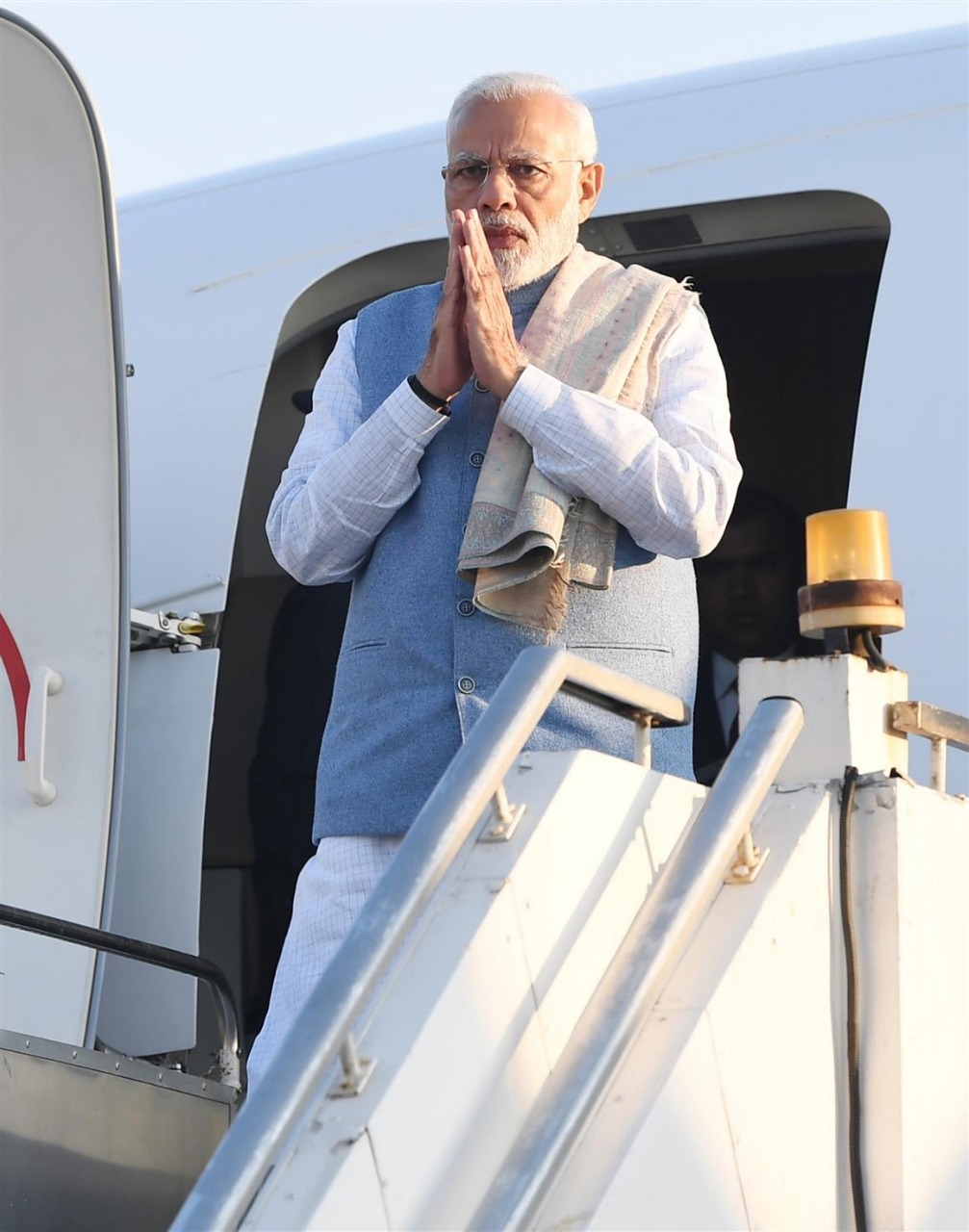 When asked about the secret behind his evergreen style, in a new biography, Modi says his sense of style is a gift of God. “God has gifted me the sense of mixing and matching colours,” Modi says in a new book titled “The Modi Effect: Inside Narendra Modi’s Campaign to Transform India”. In the book, author Larry Price quotes Modi saying, “Since I’m God gifted I fit well in everything. I have no fashion designer but I’m happy to hear that I dress well.” That certainly is an attribute of Modi’s personality. 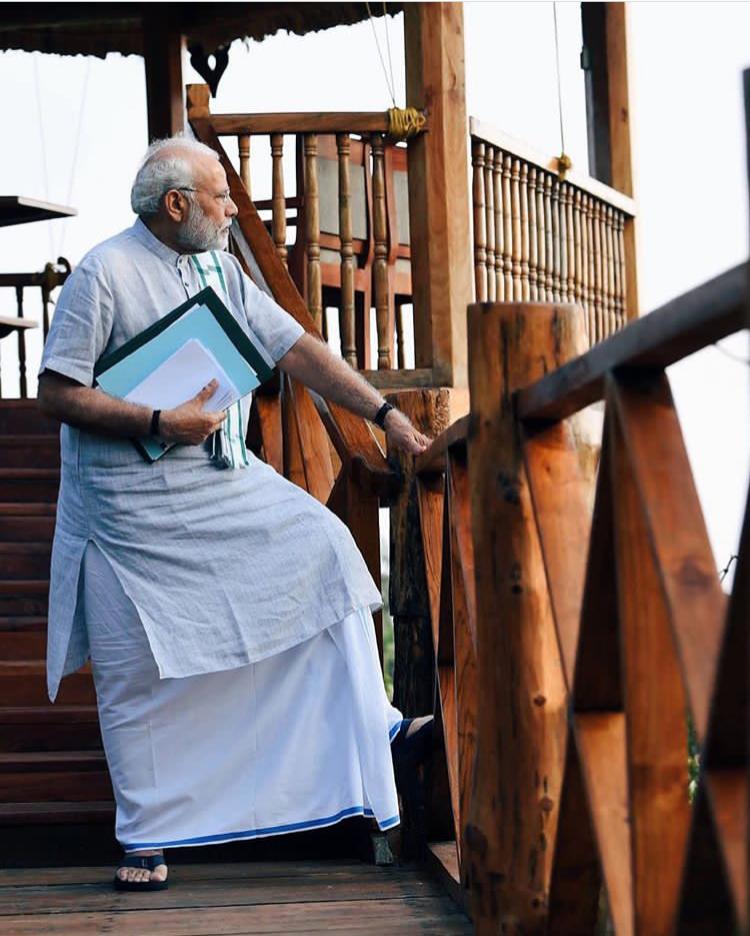 The day he was declared the Prime Minister, half sleeve kurta became a staple in his wardrobe. He is open to experiment and his monogrammed suit speaks for this. He surprised people with his burgundy suit in which he arrived at the JFK Airport in New York on September 2014. He promotes Indian handloom in abundance. He can be seen wearing Khadi and Matka Silk Kurtas with Pashmina shawls on his visit to foreign countries. He wears traditional dresses of places where he visits. Even in India, he wears the dresses of the states and regions where he visits. Formals also include in PM Modi’s collection. 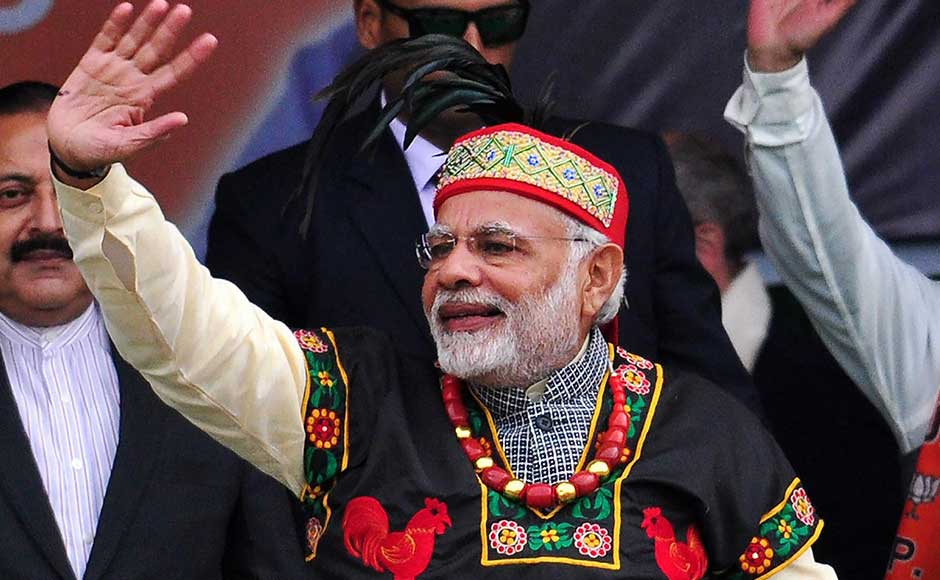 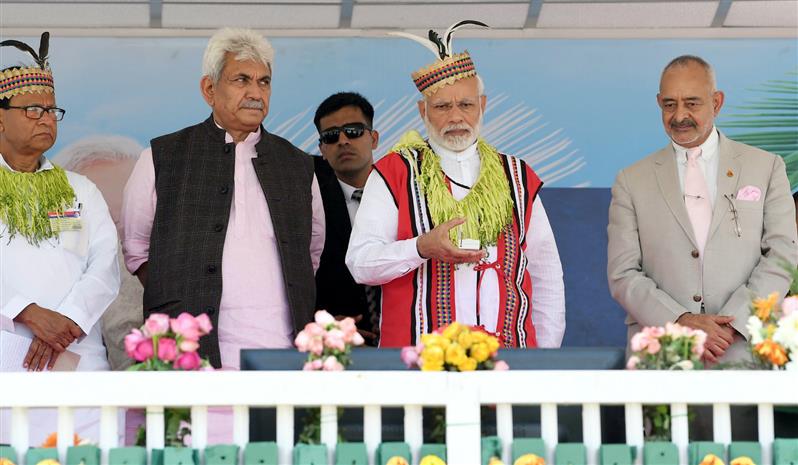 He is totally into unorthodox colours. When it comes to colors in his collection of dresses he is fond of lime green to canary yellow and even bright blue. Modi jackets and Turbans often feature in his wardrobe. He wore Modi jackets on many occasions. On Independence Day, 2018 Prime Minister Narendra Modi carried forward his tradition of wearing turbans at the celebration. This year, Prime Minister Narendra Modi was spotted wearing a saffron colour turban. In 2017, Narendra Modi had chosen a red-yellow turban with off-white stripes. In 2016, carrying forth the tradition, Narendra Modi stepped out wearing a red-pink-yellow turban. In 2015, Narendra Modi had worn a turban with red and green stripes with a long safa. In 2014, the year he was sworn in as the Prime Minister, Modi opted for an orange and green coloured Jodhpuri turban. His turbans became talk of the town. He clearly believes in wearing bespoke outfits. Ahmedabad-based Bipin Chauhan, who has tailored these outfits since 1989, says, “People claim to have designed his outfits but the Prime Minister has not worn a single outfit that hasn’t been tailored and customized by me.” 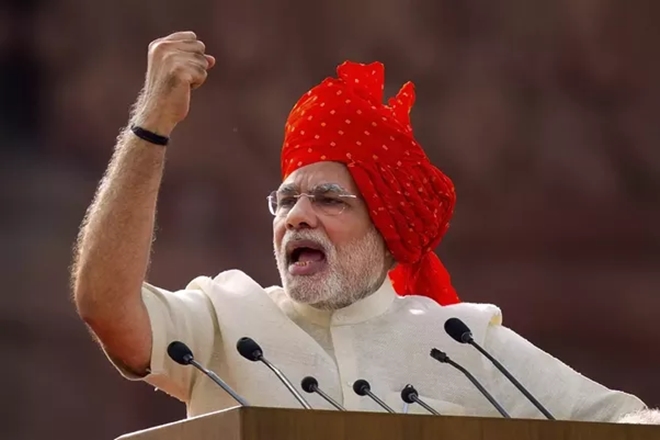 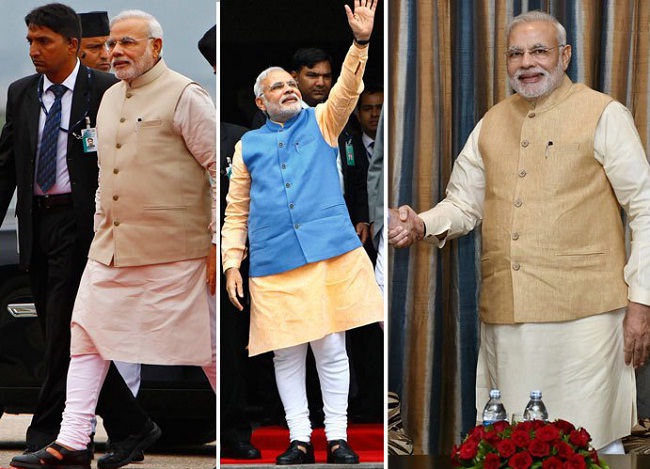 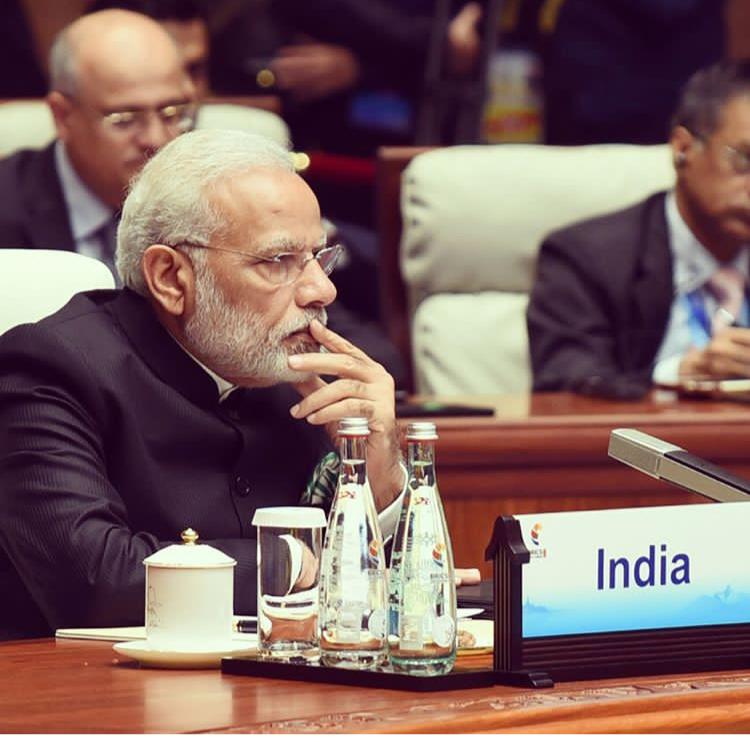 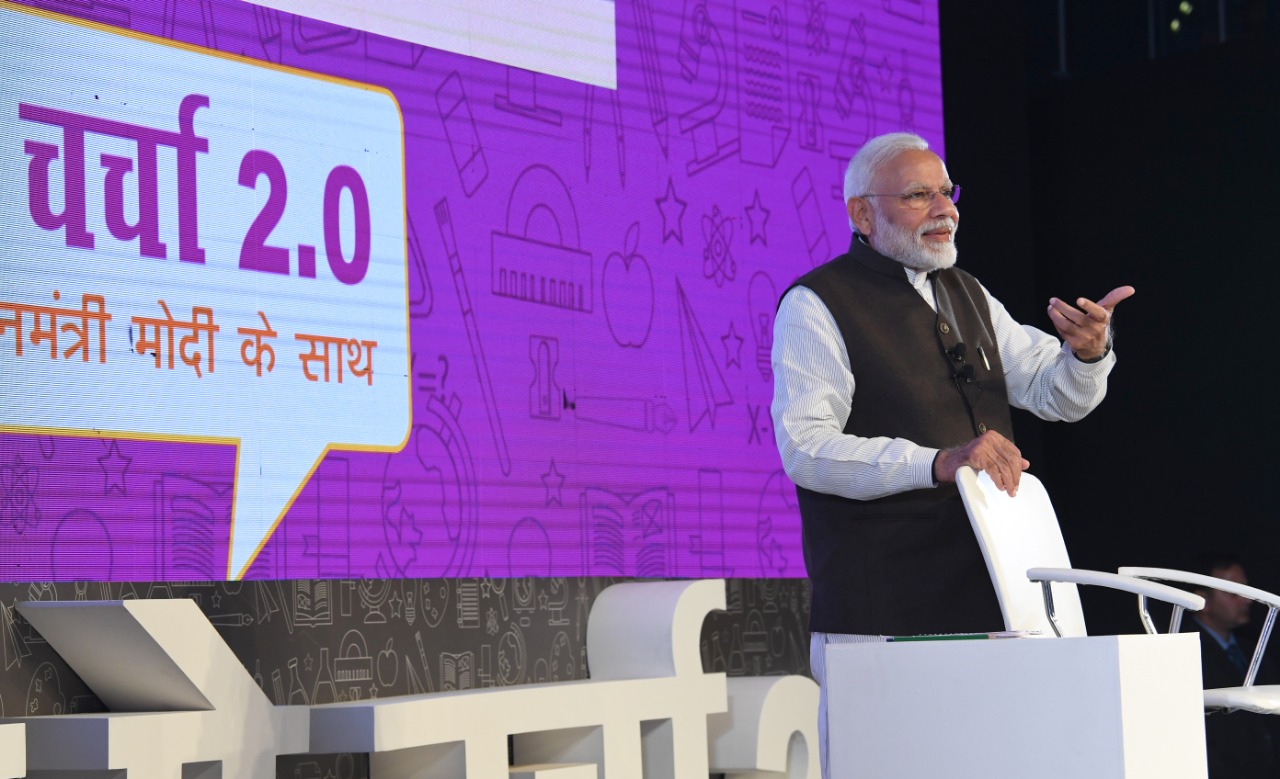 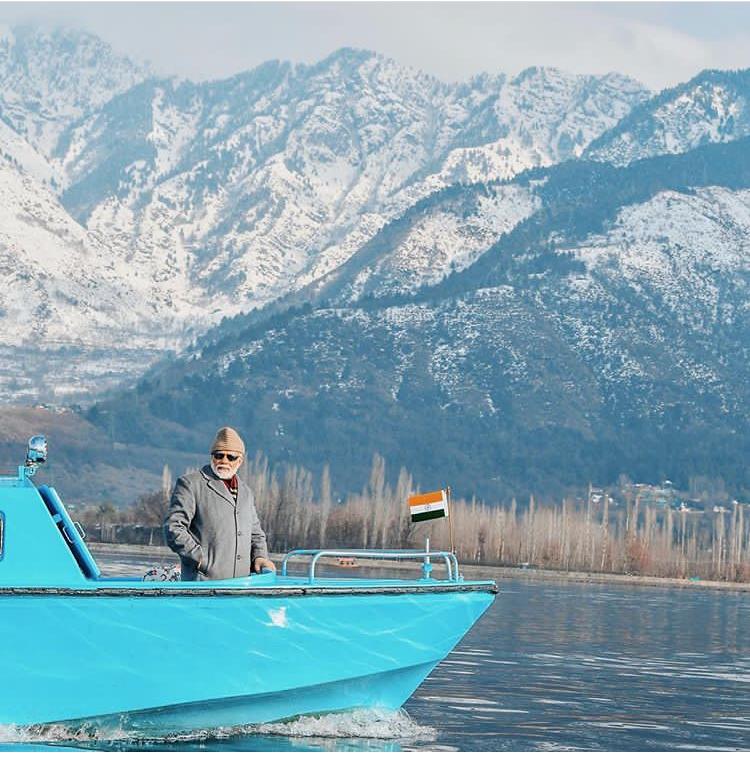 Talk about creating impressions and taking a different road, no one could not notice Modi in a traditional Mongolian costume while attending the Mini Naadam Festival in May 2015. His recent pictures of Kashmir, in one of those gatherings, the Prime Minister started his speech in the local language ‘Kashmiri’ to the delight of those present in the auditorium wearing a suave grey attire is one of his most talked about looks. PM’s fashion quotient is a definite plus to his demeanour and is adding more to Brand Modi on National and International platforms.