Newswire
Indian Army bans 89 apps for its personnel, including FB, Insta 5 hours ago
Fire breaks out at logistics godown in Delhi 5 hours ago
445 new Covid-19 cases reported in UAE; 53,045 in total 5 hours ago
PIL in Guj HC for saffron symbol on ‘Made in India’ products 6 hours ago
India has done its best to respond to Chinese aggression: Pompeo 6 hours ago
Bengaluru’s active Covid containment zones rise to 3,181 6 hours ago
Next
Prev

Brahmaputra and its relevance for India

The northeastern region of the country got step motherly treatment from central governments for decades. The connectivity to the region from mainland India has been so poor that capitals of Mizoram, Meghalaya, Manipur, Sikkim, and Nagaland still do not have railway connectivity. Only Assam and Arunachal Pradesh are connected through the giant network of Indian railways. The intra-region connectivity is also very poor due to a variety reasons including difficult terrain and tough weather. The insurgency inflicted law and order problem also barred the development of the region for decades. However, the biggest problem for intra-region connectivity in the region has been the mighty Brahmaputra River.

The 3,848 km long river is prone to catastrophic flooding due snow melting at Himalayas, the river is an example of braided river and is susceptible to channel migration and avulsion. Conclusively it is among the most dangerous river in the world and the people of northeast suffer from floods every year and thousands of people lose lives every year due to floods. The hilly terrain and sharp flow of Brahmaputra stream makes infrastructure building in northeast very difficult. The building of bridges on Brahmaputra could be carried out on Brahmaputra for only half a year as for the rest of the year, flow of river is too sharp to build anything. The difficulty in infrastructure development is the reason that despite covering most of the Assam, only three bridges were opened in last seven decades.

The Saraighat Bridge was the first rail cum Road Bridge built on Brahmaputra River. The bridge was built by Northeastern railway in the neighborhood of Guwahati, largest city in northeast India.  It was opened to public in 1963 and was named after the Battle of Saraighat by then Prime Minister, Jawaharlal Nehru. After that it took almost two and a half decades for the second road bridge to be built over Brahmaputra River. The 3 km long Kolia Bomora Setu was opened in 1987, it is located in the city of Tezpur which is a major base of India Army and Indian Air Force and hub of Assamese culture. Naranarayan Setu was the third bridge built over Brahmaputra River, it is built on western part of Assam because central part already has two bridges in Guwahati and Tezpur. The 2.28 km long bridge was opened by later PM Atal Biahari Vajpayee in 1988.

The Modi government has opened two bridges on Brahmaputra River in four years of its rule. The new Saraighat Bridge, built along the old rail cum Road Bridge was inaugurated by the Transport minister Nitin Gadkari in 2017. Another major bridge opened by Modi government in last year is Dhola Sadiya Bridge (also known as Bhupen Hazarika Bridge) which connects the state of Assam to Arunachal Pradesh. This bridge is built on Lohit River, a tributary of Brahmaputra and is located northern corner of Assam near the border of China. This 9.15 km long bridge happens to be longest bridge in the country and it will make movement of civilian and as well of armed forces easy. The strategically located bridge is very important from security point of view in the wake of Chinese activities in Arunachal Pradesh. 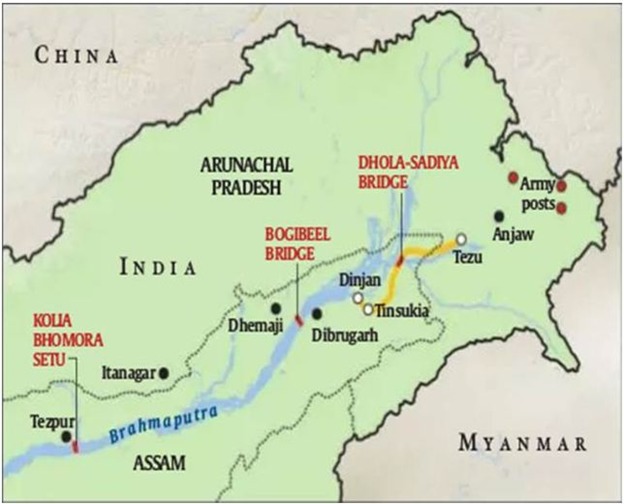 The two rail cum road bridges will help the region in connectivity through India railways. The construction of Bogibeel bridge will help the railways in expanding to easternmost parts of the country, close to China and Myanmar border. Indian Railway has prepared a plan to connect the northeastern part of the country through 517 km broad-gauge lines. The capital towns of Mizoram, Manipur, Nagaland and Meghalaya will be connected by the giant network of Indian railways by 2020. “We have set a target of 2020 to connect these state capitals to the main railway network. Once these are complete, new trains which would directly link these to the metros will be introduced. This will not only help regional connectivity within these states, but also bring the Northeast closer to the rest of India,” said A K Yadav, Chief Administrative Officer (Construction), NFR. Railways will be investing around 48,000 crores in northeastern India for various projects including these broad gauge lines. “Railways is investing Rs 48,000 crore in various projects. There is scope for improvement in several areas,”  said Ashwin Lohani, chairman of railway board.

There are five more bridges planned on Brahmaputra River by Modi government. “These bridges will connect Jorhat with Nematighat, Disangmukh with Tekeliphuta, Louit with Khablu, Numaligarh with Gohpur and North Guwahati with Guwahati,” said Union Minister form transport Nitin Gadkari. Of these five bridges, consultancies have been awarded to prepare the Detailed Project Reports (DPR) for three. The Dhubri – Phulbari Bridge is most important of these bridges and is also in most advanced stage. The government has approved construction of the longest river bridge between the states of Assam and Meghalaya to be completed by 2026. The 19.3 km long bridge will connect Dhubri in Assam to Phulbari in Meghalaya and shorten the existing distance of 203 km and save almost two and a half hours for commuters. This will be the longest river bridge in the country, leaving behind the 9.3 km long Dhola-Sadiya Bridge. The initial funds for the project will come from Japan International Cooperation Agency (JICA) while the National Highways and Industrial Development Corporation Limited (NIHDCL) has been chosen as executing agency for the project. “We will be floating tenders for the project and target to award the work during this financial year. It will be a public-funded work. The construction of any bridge across the Brahmaputra takes time since construction work can be carried out only for six months in a year,” said an NHIDCL official. NHIDCL is also entrusted agency from implementation Numaligarh-Gahpur Bridge while PWD Assam is agency for Kaupati to Rowta bridge line.

The strengthening of infrastructure in northeast is very important for security purpose as well as for the benefit of local population. When India fought 1962 Indo-China war, we have no existing infrastructure for easy movement of armed forces. Even after losing the war, successive governments made very little effort to develop the region due to heavy cost and difficulties in it. The skirmishes on Indo-China border in northeastern border were regular events but the governments did not wake up. China announced plan to build a massive dam on a tributary of Yarlung Zangbo (Tibetan name of Brahmaputra River) and it will be most expensive hydel project in the world. China plans to assert its claim over Arunachal Pradesh by building dam over Brahmaputra’s tributary. 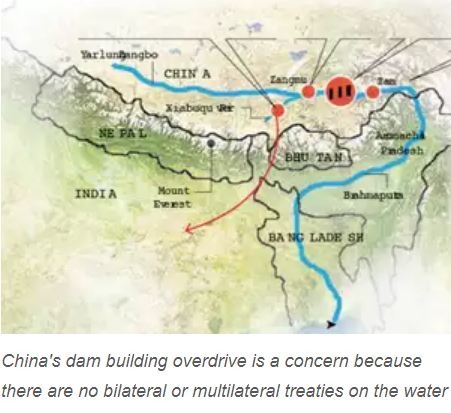 Top Railway Stations to have Tricolour in premises

‘Not a trace of China should be there,’ This is what Indian govt should tell companies who make faux ‘Made in India’ products