Five news stories in which The Quint crossed all limits of civility, common sense and journalistic ethics

The Quint, a leading leftist boutique media outlet founded by Raghav Bahl is in news today. The office of The Quint was raided by Income Tax officials. The raids were conducted for the purpose of collecting evidences which are crucial for further probe in the case. While the allegations of tax evasion are still being probed, their journalistic ethics (or lack thereof) doesn’t need any probe because The Quint has been extremely vocal and absolutely unflinching in promoting its unique brand of agenda driven journalism.

Since its inception, The Quint has earned a notorious reputation of being a ready source of misinformation and agenda driven news. The news portal often goes out of its way to insult anything Indian or Hindu in nature, while whitewashing terrorists like Osama Bin Laden, and Burhan Wani and eulogizing fanatics like Rafi Bhat.

Here are the 5 stories in which The Quint crossed all limits of basic common sense, civility and journalistic ethics:

1.) Pandey Neither a Martyr Nor a Hero: Revisiting the 1857 Mutiny

The Quint tried to downplay the contribution of Mangal Pandey in a hastily written piece which reeked of hidden anti-Brahmin agenda. Mangal Pandey ignited the fuse of India’s independence struggle. Without Mangal Pandey’s initiative, it would have been difficult if not impossible for Indians to muster the courage to rebel against the mighty British Empire.

This article written in 2016 by one Chandan Nandy, repeatedly downplayed Mangal Pandey’s contributions. In the words of Mr. Nandy:

“…Pandey’s martyrdom has been questioned by the foremost 1857 historian, Rudrangshu Mukherjee, for whom “There is no evidence to justify the view that this sepoy was a martyr and hero who decided to die with honor, betraying none of his co-conspirators, and expressing no regret or remorse.” It is Mukherjee’s case – and rightly so – that there was no causal relationship between Pandey’s solo rebellion and the more concerted action of the sepoys in Meerut.”

“…While it is certain that Pandey “had no notion of patriotism or even of India,” …The British failed to read the cryptic messages in Pandey’s invective-peppered outburst.”

2.) Here’s What PM Narendra Modi Said About the Kathua and Unnao Rapes

At a time when the nation was shaken by the inhumane crimes in Kathua and Unnao, The Quint sought to politicize the unfortunate incidents. The Quint took potshots at Prime Minister Narendra Modi. The Quint added a story with the title “Here’s What PM Narendra Modi Said about the Kathua and Unnao Rapes”. The story contain(ed) nothing, apart from a footnote claiming that it will be updated once the Prime Minister actually speaks on the two rape cases. The Quint however, was made to eat crow as the PM spoke about the ghastly crimes in the very first public meeting after the Kathua and Unnao incidents. He condemned them in no uncertain terms and promised swift action in both the cases.

3.) As the nation witnessed a heated courtroom war between India and Pakistan in Kulbhushan Jadhav matter, The Quint chose to side with Pakistan

In what read like a disastrously one sided and prejudiced piece, The Quint claimed that Kulbhushan Jadhav was an Indian Spy, and a very bad one at that who was hired even after top RAW officials had rejected his candidature. Jadhav was arrested from Balochistan and was found with his Indian passport.

In The Quint’s golden words:

The Clearest Evidence that Jadhav operated for the RAW came to the fore only after his cover – as a businessman, who would frequent Iran, especially Chabahar – was blown and he was captured by Pakistan, following which a former RAW chief, besides at least two other senior officers, called his Mumbai-based parents to “advise” them to not speak about their son’s case to anyone.

The Other evidence was the second passport, with the name Hussein Mubarak Patel, that he carried, which shows it was originally issued in 2003 and was renewed in 2014. The Second Passport was issued in Thane on 12 May 2014 and was due to expire on 11 May 2024.”

A nonsense of this magnitude was bound to upset people, and so it did. People didn’t take The Quint article kindly. The Quint was forced to take their article down. 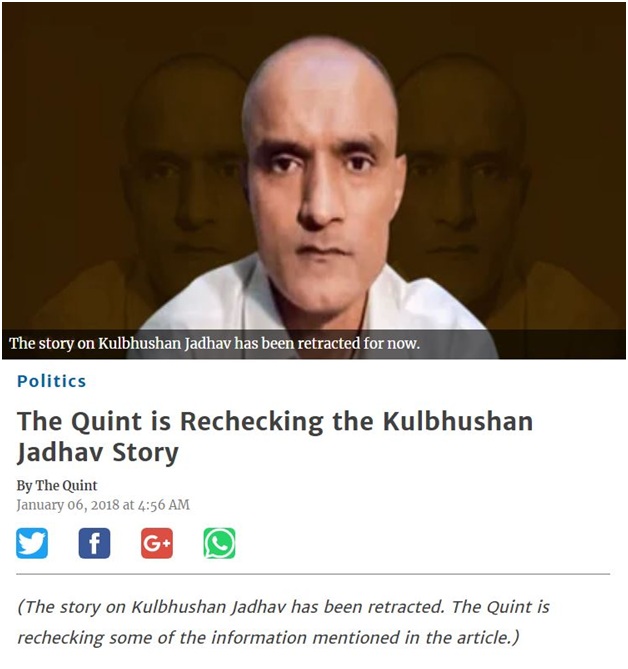 4.) The Cute Osama Bin Laden the world doesn’t know about:

The article had quotes such as these:

In describing the young boy Osama that we all knew, I would say that he was proud, but not arrogant. He was delicate, but not weak. He was grave, but not severe. Certainly he was vastly different from my very boisterous brothers, who were always teasing me about one thing or another. 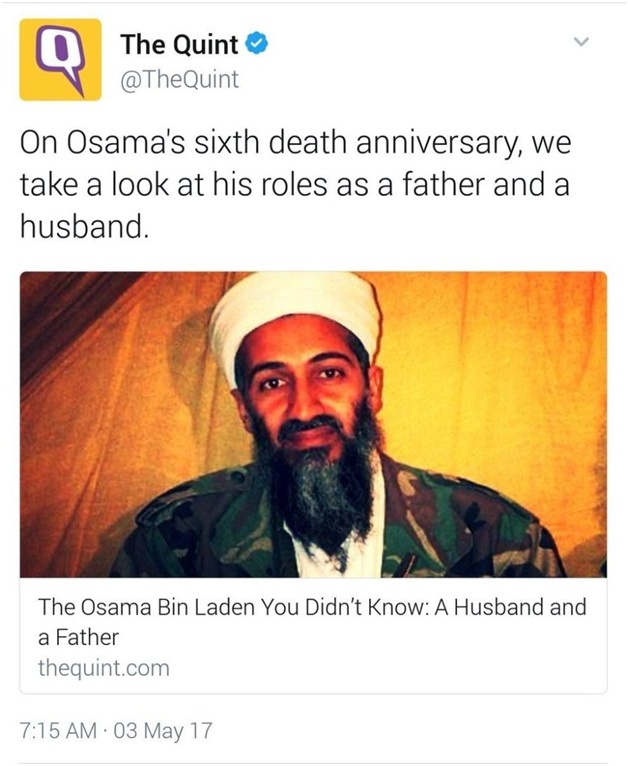 5.) When The Quint killed a solider

In the month of March 2017, Lance Naik Roy Mathew became the victim of slapdash journalism of The Quint. The Quint carried out a sting operation, on the much debated ‘’sahayak’’ (helper) system in the army which dates back to the colonial days. The sting video showed Lance Naik Roy Mathew, speaking against his bosses. Normally sting videos feature people with pixilation effect on their faces so as to conceal their identities, but The Quint had other ideas. The Pixilation in this case was not proper, and Roy was clearly identifiable. Roy had no idea that he was being filmed.