The Indian economy is performing above expectations despite unfavorable environments across the world. The global turmoil due to trade cum currency war and rising fuel prices is expected to hurt emerging Asian economies. The economic growth in countries like China, Malaysia, and South Korea is slowing down and capital flight is taking place. The capital-rich western investors are pulling money out of export-dependent Asian markets due to protectionist measures being taken in their home country which is expected to hurt these economies. In the tide across Asia one country which stands firm and is the fastest growing major economy in the world is India. So, what are the reasons behind the animal spirits of the 2.6 trillion dollars Indian economy? Well, the macroeconomic reasons are as following. 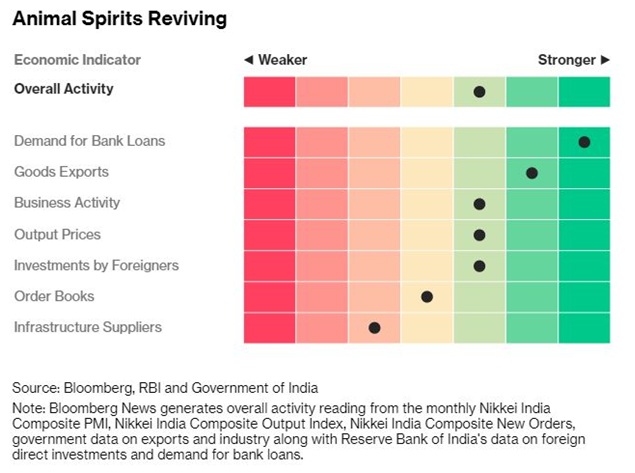 The Business activity in the service sector expanded with the quickest pace in June this year. That pulled up the Nikkei India Composite Index to its highest since October 2016 with manufacturing activity also showing signs of growing at a faster clip. The service sector and industrial sector together comprise more than 80 percent of the Indian economy so if these two sectors are bullish then the overall business activity and economic growth will show up bullish stance. Although the overall output price is growing due to rising oil prices but the producers have no problem in passing those prices to consumers. The rationalization of GST rates on many products has sent the overall prices to a lower level despite the growing output prices. The consumer confidence is likely to stoke inflation and this is likely to force RBI to have a hawkish stance on Wednesday monetary policy review. 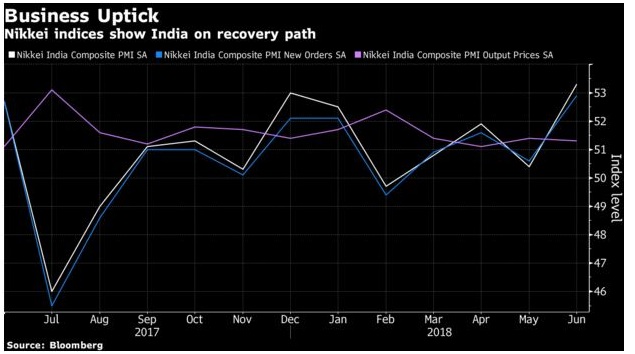 The exports are still in the recovery stage after being heavily affected due to the twin shocks of GST implementation and demonetization. The global trade cum currency war will also impact the recovery in exports as countries like the United States has imposed tariffs on some Indian exports. The only silver lining in the exports is weak rupee which is expected to make Indian exports more competitive in international markets. The software sector is expected to be the prime beneficiary of a weak rupee and in long-term, the textile sector is also expected to pick up if the government implements some quick reforms. 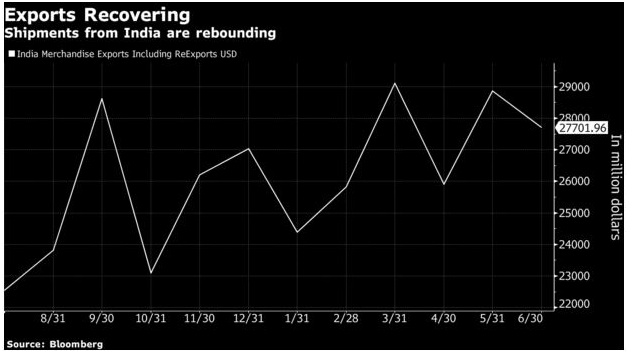 The consumer activity is continuously upwardly mobile after the demonetization shocks eroded. This is very important for the economic growth of the country because domestic consumption is responsible for more than two third of Indian GDP. Data from the Society of Indian Automobile Manufacturers (SIAM) show that the industry produced nearly 17 percent more vehicles in the April-June period than a year ago. Passenger vehicle sales grew close to 20 percent during that period and make for a handy indicator in a country which has no retail sales data to track consumer spending. The lending by banks is growing at fast pace with credit to various sectors including agriculture has risen 12.3 percent year-on-year as of July. 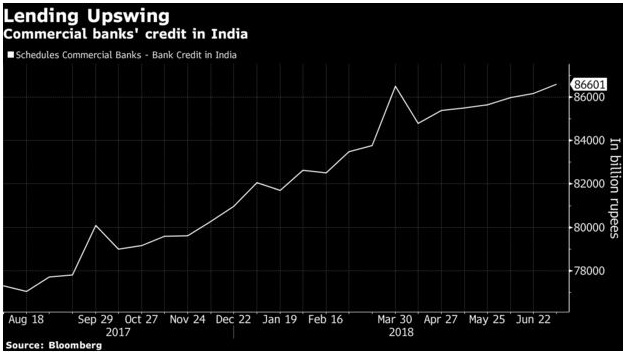 The Foreign Direct Investment (FDI) has grown after a dip in March. The reason behind this is probably the capital flight from other Asian economies like China which are no longer seen as safe investment destinations due to trade and currency conflicts. Growth in mining and heavy industries — which account for 40 percent of industrial output — has been rather anemic, easing to a 10-month low in May due to weaker steel and cement output and a contraction in crude and natural gas production. It’s not all bad news though. For instance, coal production rose by double digits for the second month in a row in May albeit at a slower pace. Besides, electricity generation went up 3.5 percent in May compared to 2.1 percent in the previous month.

So overall, the economic outlook of the country seems positive. The pickup in inflation above the set target of 4 percent is likely to force the Reserve Bank of India to increase interest rates to curb the prospective inflation growth. The Modi government will be going in the general election in less than one year so the rise in inflation will not be good news for the government because it could hurt the common man sentiments. The economic growth will be at a good pace even if the interest will be increased.

PM Modi slams opposition, says not scared to be seen with industrialists