There was a bipartisan consensus on free trade for almost three decades since the 1980s. The number of bilateral and multilateral Free Trade Agreements (FTAs) have grown exponentially in the previous decades. The global ride on free trade got a break in the last few years with protectionist leaders such as Donald Trump at the helm of state affairs. The North American Free trade Agreement (NAFTA), which was considered the flag bearer of the success of free trade was called “the single worst trade deal ever approved in the United States” by Donald Trump during his 2016 presidential campaign. He promised to “either renegotiate it or break it” if elected to power, and keeping his promise, he started the renegotiation process by July 2017. The NAFTA is an agreement signed by Canada, Mexico, and the United States, creating a trilateral trade bloc in North America. The agreement came into force on January 1, 1994.

According to the Trump administration, Mexico benefited disproportionately from NAFTA while the US ended up as a loser in the agreement. A lot of industries in the American south moved to Mexico to take advantage of cheap labor and lower regulations available there. Therefore, the companies which employed American people earlier were now providing employment to Mexican citizens. A number of US firms established maquiladora (units set up with incentives from the government to make goods mainly for exports) operations along the US-Mexican border. Maquiladora accounts for 53 percent of Mexico’s total export. NAFTA had become the springboard for Mexico to export to the global market. The lower tariff rates on Mexican imports also hurt the US industries which required unskilled and semiskilled labor because Mexico could produce these goods at cheaper rates. Donald Trump got huge support in the American South due to his promise to renegotiate NAFTA, since the region lost out the most due to the free trade agreement.

The NAFTA can be compared to South Asian Free Trade Agreement (SAFTA), and the Indian governments deal with countries like Bangladesh in this agreement could be compared to that of America’s deal with Mexico. The SAFTA  was the worst deal ever from an Indian perspective and India and its companies stand to lose due to this poorly negotiated free trade agreement. The South Asian Free Trade Area (SAFTA) is an agreement ratified in 2009 under the UPA regime. It created a free trade area of 1.8 billion people in Afghanistan, Bangladesh, Bhutan, India, Maldives, Nepal, Pakistan and Sri Lanka. India was the biggest exporter to Sri Lanka, accounting for 10-15 percent of its imports.  By contrast, the major export destinations of these countries are the US and Europe, and therefore, India should not have entered into a free trade deal with South Asian countries as it already had the upper hand in the trade with its neighbors. The export and import data of ‘Sensitive list’ goods is as follows. 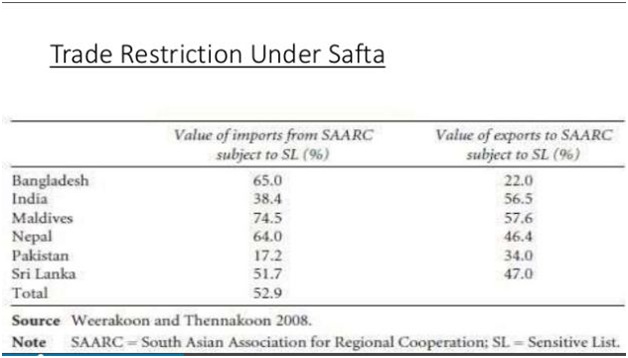 SAFTA required the developing countries in South Asia (India, Pakistan and Sri Lanka) to bring their duties down to 20 percent in the first phase of the two-year period ending in 2007. In the final five-year phase ending 2012, the 20 percent duty was expected to be reduced to zero in a series of annual cuts. The least developed nations in South Asia (Nepal, Bhutan, Bangladesh, Afghanistan, and the Maldives) have an additional three years to reduce tariffs to zero. While India reduced tariffs as per the agreement, the other countries were less enthusiastic about it since the very beginning. In 1995, India granted most favored nation (MFN) status to Pakistan, but Pakistan did not reciprocate. Pakistan decided to extend MFN status to India in 2011, with an aim for this to become effective from 1 January 2013, but this target was missed. Pakistan and other least developed countries failed to remove non-tariff barriers.

India ended up losing out due to SAFTA because other countries did not follow the rules of the agreement despite the fact that the deal was skewed in their favor. India should rip apart the agreement just like the Trump administration and renegotiate the deal.

‘If convicted in RSS defamation case, Rahul would not be able to contest elections in 2019’- Subramanian Swamy