As per the latest GDP data released by the Central Statistics Organization (CSO), the agriculture sector is reviving at a good pace. In the last quarter of fiscal year 2017-18, growth in the sector was 4.5 percent. This shows a healthy revival in agriculture with the Rabi season being productive for farmers. In the other quarters of this fiscal, growth was at 3 percent , 2.6 percent 3.1 percent for Q1, Q2 and Q3 respectively. The other sectors like construction and manufacturing also performed exceptionally well as per the latest data release by CSO. 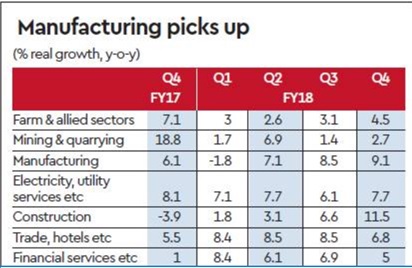 The agriculture sector was hit hard due to successive drought for two years in the country just after the Modi government came to power. The drought in the fiscal year of 2014-15 hit the farmers badly across the country. There were many incidences of farmer suicide due to pressure from banks and Sahukars for loan repayment which they could not repay because agricultural produce was not sufficient. Agriculture employs almost half of the population of the country, and hence it is very important that this sector performs well if India wants to achieve a double digit growth. In the fiscal year of 2016-17 and fiscal year of 2017-18, agricultural growth once again revived due to positive monsoon and serious efforts from the government. The growth for these two fiscal years was 6.3 percent and 3.4 percent respectively. 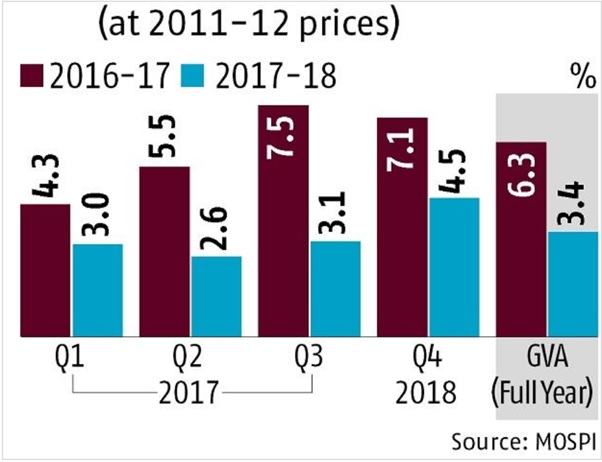 The government launched many schemes to fulfil the promise of the Modi government to double farmers’ income by year 2022. To make farmers financially secure in the case of poor crop growth, the government launched Pradhan Mantri Fasal Bima Yojna (PMFBY). To provide irrigation facilities to farmers across the country, PM Modi launched Pradhan Mantri Krishi Sinchai Yojna (PMKSY) and pumped money into the National Bank for Agriculture and Rural Development (NABARD) to increase credit penetration to farmers. The Economic Survey 2017 tabled in the parliament before the presentation of the budget for the FY17-18 predicts an agricultural growth of 4.1% in the current year from 1.2% in 2015-16. In the latest budget allocation, the government increased the spending on agriculture by a large amount to reduce the rural distress in the country which was also one of the reasons for the good performance in agriculture sector. The contribution of agriculture in the total growth was above 9 percent for the last two quarters. 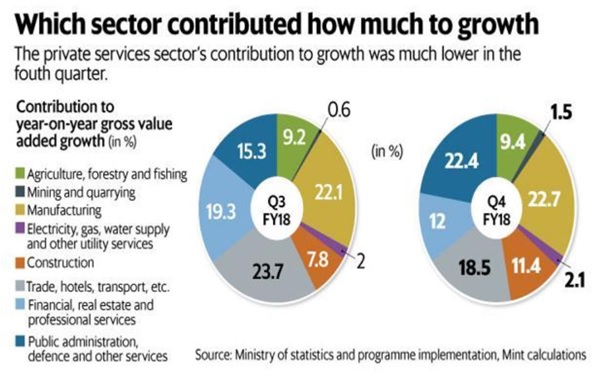 The boost in the agriculture sector is an indicator that the policies by the government are being implemented well on the ground. India is the world’s leading producers of several dry fruits, agriculture-based textile raw materials, roots and tuber crops, pulses, farmed fish, eggs, coconut, sugarcane and numerous vegetables. India was ranked in the world’s five largest producers of over 80% of agricultural produce items, including many cash crops such as coffee and cotton. India is one of the world’s five largest producers of livestock and poultry meat, with one of the fastest growth rates, as of 2011. The good performance in agriculture will help to take on rural distress prevalent now and will help to make rural India more prosperous through employment generation.