So who is lying about oil prices – India Today or Amit Malviya? It’s India Today

by Amit Agrahari
in TFIUvaach
0

The public perception that the PM Modi government is benefiting from the petroleum price surge was created by left leaning media outlets to defame the Modi government and pin the blame on the central government. Many news channels and newspapers are running stories on the increase in oil prices and blaming the Modi government for allegedly exploiting the situation. When Amit Malviya exposed these media organizations with the use of facts, India Today did an article on the tweet by the BJP IT cell head, saying that he is factually wrong, which  seems more and more like a piece of anti-government propaganda as the statement by Amit Malviya is factually correct. The headline of India Today read as following:

While the tweet did not mention once that Delhi, West Bengal benefit most from the surge in petrol prices, India Today used “most” in their headline, suggesting that Amit Malviya was wrong. Rightlog did a fact check of Malviya’s statement and found that he is cent percent right. His statement has two parts, the first part claiming that the Modi government gets nothing from the price hike, while the second claims that states like Delhi and West Bengal benefit from the price hike.

The second part of Mr.Malviya statement reads “It is state governments run by the likes of Arvind Kejriwal and Mamata Banerjee who benefits”. The state government levies Ad valorem tax (“according to value”), which means that this tax changes with a change in oil prices. Whenever the price increases, the tax also increases, and vice versa. For example, if the price of oil is Rs. 100 and the tax on that is 20 percent then the consumer has to pay Rs. 20 as a tax, but when the price is Rs. 200 then the consumer has to pay Rs. 40. Different states have different tax rates on petroleum ranging 40 percent to 10 percent.

Four states — Maharashtra, Gujarat, Madhya Pradesh and Himachal Pradesh reduced the VAT rates on petrol and diesel in October following the excise cut by the center. At that time all these states were ruled by the BJP except Himachal Pradesh.  Other states like Delhi, ruled by Arvind Kejriwal and West Bengal, ruled by TMC did not reduce the prices to pass on the benefits to the consumer,  and are now conveniently blaming the Modi government for increased oil prices. The money that different states got over the last two days after an increase in prices of petrol and diesel are as following: 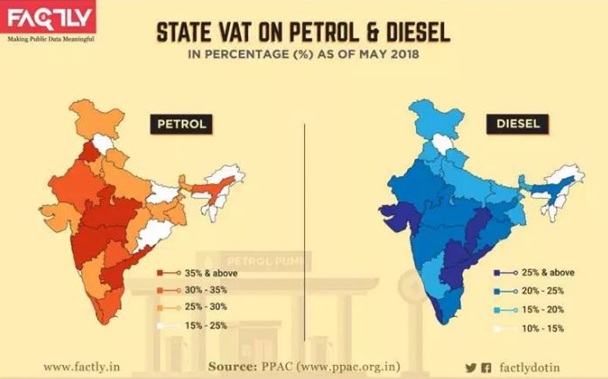 The next important point that needs to be noted is that the Fifteenth Finance Commission had increased states’ share of Union taxes to 42 percent from the previous 32 percent. Therefore, 42 percent of what the central government earns through central excise duty ultimately goes to the states. The question that should be asked is how the prices of petrol more than doubled during the 10 years of UPA rule in the centre. 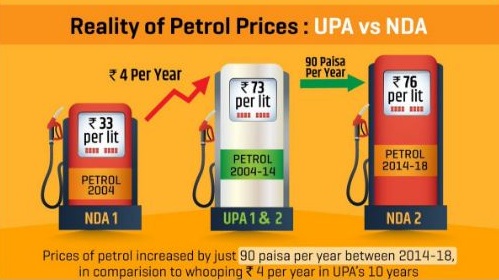 KCR to skip swearing-in ceremony of Kumaraswamy, clear snub to the ‘federal front’ and Congress.