It seems that our Indian mainstream media has learnt no lesson from the massive uproar that followed the selective outrage post the Kathua rape case. After another case of a girl being brutally raped by soulless monsters has surfaced in Yamuna Nagar, situated in the NCR region of the state of Haryana, some Indian media houses have resorted to the same dirty tricks, trying to absurdly connect the incident with temples, just to gain some cheap publicity.

Before going deep into the dirty tricks, let’s have a quick look at the case: In a village of the Jathlana region near Yamuna Nagar, on the night of 19th April, a girl was sleeping in a courtyard along with her cousins outside her house in the village. As per the testimony of the girl, in late night, four to five people pounced upon her and gagged her by stuffing a cloth into her mouth.

Then they took her to an abandoned dharamshala [rest houses] near a temple dedicated to Lord Shiva, some 50 steps from her home. There, the cannibals raped her, threatening to slit her throat with a knife if she tried to resist. Two of the monsters were stationed outside the crime scene, who were on guard for the rest.

The girl’s head was then banged onto the wall, which rendered her unconscious. It was much later, when she regained unconsciousness that she managed to escape, and narrate the horrendous ordeal to her relatives who filed an FIR without delay. As of now, all the accused are arrested, according to the statements of the Haryana Police officials.

Hardly had this matter surfaced, when some of the mainstream media got their ammunition for their nefarious agenda of ‘Sanatan shaming’. Mirror Now, a sister concern of the Times Now and popularized by news anchor Faye D’ Souza, was one of the first ones to peddle the agenda of connecting the rape to the Temple complex, with the following tweet:-

Not far behind was the ever notorious ABP news, which further peddled the ‘temple’ narrative with this outrageous tweet:-

Even the popular Hindi news channel Aaj Tak raised the ‘temple’ angle by the following headline:-

“Haryana witnesses Kathua type crime, attempt to kill a minor after raping her”

This is nothing new for the media, who are notorious for giving wind to any rumor that would help their patrons stay in power. However, what they did with this case is nothing short of horrifying.

Sinister anti-Hindu propaganda reaches new low. @abpnewshindi and @MirrorNow report rape in “temple premises”.
Truth – The dharamshala where the incident happened is NOT a part of any temple. Also, two of the accused are MUSLIMS. pic.twitter.com/bX0X0tuhQQ

However, in their over enthusiasm, they forgot to take one thing into account: little details. As once quoted by the great detective Sherlock Holmes, ‘the little details are by far the most important.’ A salute to the journalists from Dainik Jagran and Amar Ujala, who exposed these little details within time by covering the incident, saving the Sanatanis another embarrassment on the grounds of the Kathua rape case.

The media alleges that the rape took place inside a temple complex, owing to the name ‘Dharamshala’, which is wrong, and also exposes the intellectual bankruptcy on the part of the journalists. A dharamshala is a rest house, where people, irrespective of origin, come to rest after a tiring journey, and then proceed forward. This is an ancient concept, prevalent in the entire nation since time immemorial.

Also, the dharamshala in Yamuna Nagar was not connected to the Shiv Temple in any case. This has been duly verified by the investigating officers from the Haryana Police situated in Chandigarh. Interestingly, according to the Amar Ujala report, neither the temple nor the dharamshala was owned by any priest, and as of now, the dharamshala is in a ruined condition, used for primarily anti social activities. Here’s the true story, as reported by eminent nationalist newspaper, Dainik Jagran:- 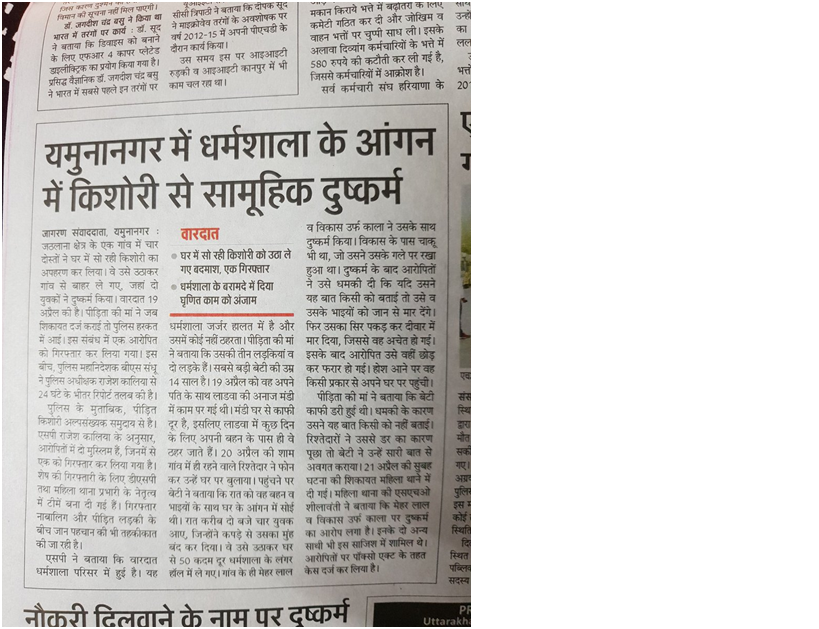 To expose the malicious propaganda of the media further, here’s a fact: the accused in the Yamuna nagar case are not solely Hindu, as the media claimed. If only the Indian media learnt this simple fact, they wouldn’t be becoming  the nation’s laughing stock again and again!