Virat Anushka Wedding and The Glorious Tradition of Indian Army

by Sankalan Chattopadhyay
in Opinions
0

As the famous cliché goes – If Hollywood is a business, then getting married in Hollywood is a Fortune 500 company. I am sure whoever wrote this doesn’t know about Bollywood, Indian Cricket and what happens when a cricketing heartthrob marries a Bollywood Diva. And we all got to witness this when Team India Captain Virat Kohli married Bollywood Actress Anushka Sharma.

Virat Kohli and Anushka Sharma, both took to twitter to inform us about their big decision.

Today we have promised each other to be bound in love for ever. We are truly blessed to share the news with you.This beautiful day will be made more special with the love and support of our family of fans & well wishers. Thank you for being such an important part of our journey. pic.twitter.com/aobTUwMNAK

Today we have promised each other to be bound in love forever. We are truly blessed to share the news with you. This beautiful day will be made more special with the love and support of our family of fans & well wishers. Thank you for being such an important part of our journey. pic.twitter.com/Scobdiqk7l

And since then, Media went into an overdrive reporting every single update about the grand wedding. We were told that Anushka Sharma and Virat Kohli had a fairytale wedding in Italy. It was an (almost) secret wedding which was attended by only a select few from the Groom and the Bride’s side. We were informed that their wedding took place at a luxury resort called Borgo Finocchieto in Tuscany, Italy, the cost of this luxury property is Rs. 13,54,744 per night. A “startling” fact that this is the very place where Barack and Michelle Obama had stayed earlier in 2017 was also reported with great zeal. We were also told that the outfits of the couple were designed by Ace Designer and Anushka’s favourite Sabyasachi.

The fairytale wedding also had a villain in the form of a smalltime Bharatiya Janata Party leader from Madhya Pradesh who questioned the patriotism of Virat Kohli for getting married to Anushka Sharma in a ceremony in Italy. This gave traditionally anti-BJP media enough fodder for a couple of days.

Then came the receptions which took place in Delhi and Mumbai. Prime Minister Narendra Modi and Finance Minister Arun Jaitley were among the high-profile guests at the wedding reception for the couple in New Delhi. The Mumbai reception was clearly the more glitzy one attended by the who’s who of B-Town and Cricket. As it happens often, we were duly informed about the best dressed ones at the grand reception in Mumbai.

So basically, media made sure that we had a virtual tour of Anushka and Virat’s grand marriage and receptions, even the honeymoon without actually being there. But most of the media missed a chance to feature possibly the most remarkable moment of the reception. Take a look at this picture: 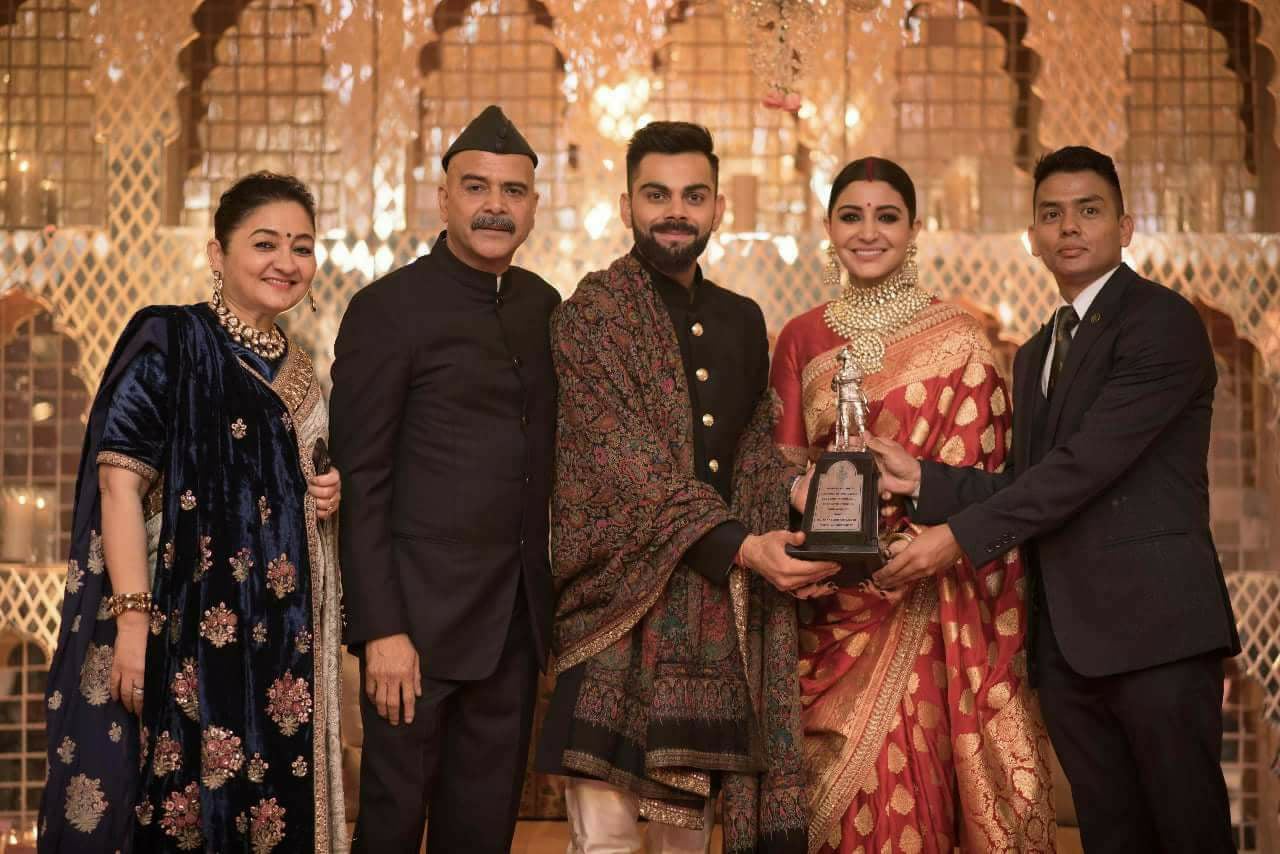 Virat and Anushka received a special gift from none other than The Garhwal Rifles of The Indian Army on their wedding.

The Garhwal Rifles is one of the most decorated infantry regiments of the Indian Army. It was raised in 1887 and has been serving since selflessly with glory for more than 120 years. Their superlative feats in the battlefields of World War 1 and World War 2, as a part of the British Indian army made them stuff of legends. Since independence they have been a part of every war that the nation was faced with, not to forget their numerous military operations. During 1962 war, their act of valor at Nuranang is considered as one of the finest examples of Infantry Battle. So far, the Garhwal Regiment has won 30 battle honors.

While we don’t mean to discredit our media, but this was too special a moment to be missed!