Newswire
Indian Army bans 89 apps for its personnel, including FB, Insta 7 hours ago
Fire breaks out at logistics godown in Delhi 7 hours ago
445 new Covid-19 cases reported in UAE; 53,045 in total 7 hours ago
PIL in Guj HC for saffron symbol on ‘Made in India’ products 7 hours ago
India has done its best to respond to Chinese aggression: Pompeo 8 hours ago
Bengaluru’s active Covid containment zones rise to 3,181 8 hours ago
Next
Prev

by Atul Kumar Mishra
in Opinions

In the month of March 2017, Lance Naik Roy Mathew became the victim of slapdash journalism. A left-leaning boutique media outlet called ‘The Quint’ had carried out a sting operation, on the much debated ‘’sahayak’’ (helper) system in the army which dates back to the colonial days. The sting video showed Lance Naik Roy Mathew, speaking against his bosses. Normally sting videos feature people with pixilation effect on their faces so as to conceal their identities, but The Quint had other ideas. The Pixilation in this case was not proper, and Roy was clearly identifiable. Roy had no idea that he was being filmed.

Lance Naik Roy Mathew hanged himself on Feb 25 after writing his suicide note, and sending an apology SMS to his reporting officer.

Many people condemned The Quint for shoddy journalism. Many people urged the government to shut this media portal and then people forgot. Media Platforms like The Quint know that we are a country that suffers from selective amnesia and that shoddy hitjobs readily find their takers in this country. Hence, they came up with another one. This one was about Kulbhushan Jadhav.

As we all know, that Kulbhushan Jadhav was an Indian Navy officer who retired prematurely. He had no link with the government, since his retirement. However, as per Pakistan Jadhav is a serving officer in the Indian Navy, commissioned to the Research and Analysis Wing (RAW). Pakistan believes Kulbhushan Jadhav to be involved in subversive activities in Balochistan and Karachi.

According to Pakistan, Kulbhushan Jadhav was arrested inside Balochistan in Mashkel near the border region of Chaman on 3 March 2016 during a counterintelligence raid conducted by security forces.

Indian government rubbished Pakistan’s claims and maintained that Jadhav was abducted from Iran where he works as a businessman.

Baloch leader Hyrbyair Marri echoed India’s stand and categorically stated that Kulbhushan Jadhav was “never arrested from Balochistan”, in fact he was, “abducted from Iran by Pakistani state-sponsored religious proxies and handed over to Pakistani forces.”

In a major loss of face to Pakistan, even an ex-ISI officer admitted that Kulbhushan Jadhav was indeed captured from Iran.

In the light of all these statements and responses, let us take a look at what the Quint had to say about Kulbhushan Jadhav:

2. Kulbhushan Jadhav was a terrible Spy

As per the Quint’s Highly placed source, Kulbhushan Jadhav was not just a spy but a terrible one that that. His candidature was refused by 2 RAW secretaries, but he was still hired because of the efforts of a former chief. Kulbhushan Jadhav as per The Quint was unprofessional as a spy who would use over the air waves to communicate with his seniors and peers. ISI intercepted the unencrypted messages and were able to isolate Jadhav’s location. The Quint also says that Jadhav was prone to bragging. Looks like the Highly placed sources have some sort of a personal vendetta against Jadhav.

3. “Facts” seem to be against Kulbhushan Jadhav

To quote The Quint:

The Clearest Evidence that Jadhav operated for the RAW came to the fore only after his cover – as a businessman, who would frequent Iran, especially Chabahar – was blown and he was captured by Pakistan, following which a former RAW chief, besides at least two other senior officers, called his Mumbai-based parents to “advise” them to not speak about their son’s case to anyone.

The Other evidence was the second passport, with the name Hussein Mubarak Patel, that he carried, which shows it was originally issued in 2003 and was renewed in 2014. The Second Passport () was issued in Thane on 12 May 2014 and was due to expire on 11 May 2024.”

Wait what? There seems to be 1 big confusion and 1 major misconception.

The Confusion -The Quint alleges that Kulbhushan Jadhav was indeed an Indian spy so why will an Indian spy on an espionage mission use his Indian Passport? Seems self-defeating!

The Misconception – The Quint seems to be taking Pakistan’s statements as Sanatan Satya here. First of all, Pakistan is a habitual, pathological and obsessive liar. Didn’t they win all their wars against India and have been treating people in PoK with honor and the ones in Balochistan with compassion? And secondly, any country caught in such a situation will only come up with lies and falsities to solidify their claims. Didn’t the International Court of Justice disregard all these allegations and stayed death sentence given to Jadhav by Pakistani military court until further notice?

As mentioned above, by 2 RAW secretaries had already rejected Jadhav’s candidature. The sources further go on to state that standard operating procedures may have been relaxed while recruiting Jadhav. The ones who recruited Jadhav recruited him for the reasons best known to them.

So, to conclude what The Quint said – Kulbhushan Jadhav was an Indian Spy, and a bad one at that who was hired even after top RAW officials rejected his candidature. Jadhav was arrested from Balochistan and was found with his Indian passport.

A nonsense of this magnitude is bound to upset people, and so it did. People didn’t take The Quint article kindly. At the time of writing this article #BlockQuint is trending number one on Twitter. And The Quint has been forced to take their article down. This is how the article page currently looks like. Notice the disclaimer: 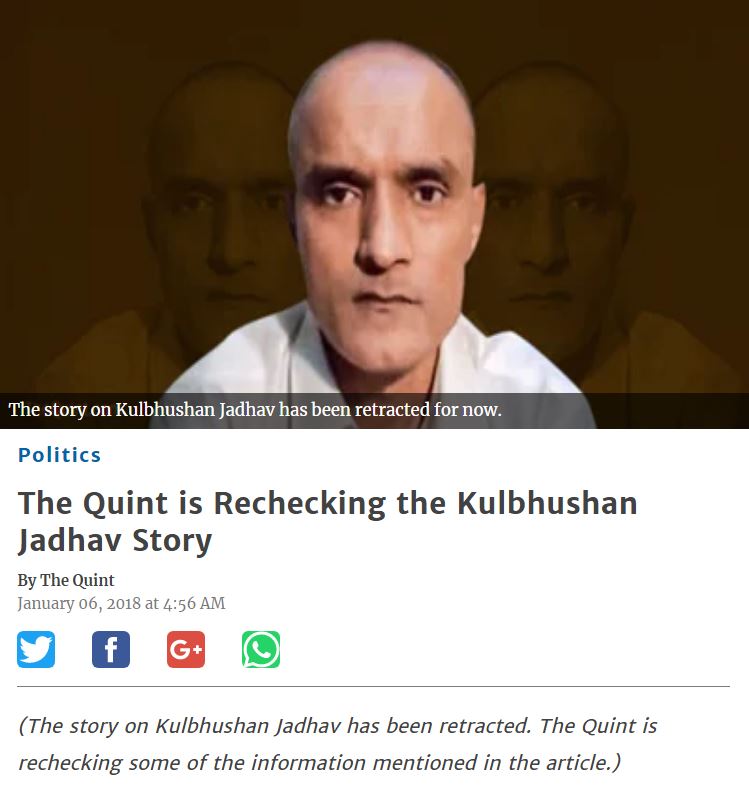 (The story on Kulbhushan Jadhav has been retracted. The Quint is rechecking some of the information mentioned in the article.)

Is that an unsubtle admission of the fact that The Quint doesn’t check facts beforehand? Had it been a gossip magazine, things would still have been okay, but the Quint tends to write on matters of national and international importance. I see that as sedition and sedition is a punishable offence under Indian law. I hope the authorities are observing this blog and the ones similar to it. Such blogs tend to be habitual polished liars. A polished lie is a potent propaganda tool. And All lies need to be crushed.

The Quint seems to have hit the spot, as several Pakistani Media outlet were seen quoting its article:

Latest Update: The Government of Pakistan seems to have developed a liking for The Quint as well.

Indian paper 'The Quint' had in one of its stories accepted the truth that Kulbhushan Jadhav was a spy and that some RAW officials had reservations about his appointment.
~Foreign Office Spokesperson Dr. Muhammad Faisal pic.twitter.com/EBPqLwGwvP

‘Not a trace of China should be there,’ This is what Indian govt should tell companies who make faux ‘Made in India’ products