Now Madrasas have a problem with Portraits of PM Modi

by Harsh Jaitak
in Opinions
0

Madrasas in Uttarakhand are now up in arms against State government’s order to install Prime Minister Modi’s portrait in all educational institutions. Darul Uloom fatwa Chief has called this order un-Islamic. Uttarakhand CM slammed the Madrasas asking them to give up their conservatism.

So! what really is this entire controversy about?

Uttarakhand Chief Minister Trivendra Singh Rawat issued a directive to all the Madrasas that are funded by Uttarakhand government to mandate the use of the portrait of Prime Minister Narendra Modi inside the premises of the Madrasas.

However, the Madrasas said that it was against Islam to use pictures of any leader, even those of any Muslim clerics inside the Madrasas and hence refused to implement this order. The Chief Minister asked these institutions for a clarification on non-implementation of the state government order. Darul Uloom believes this order is against Sharia and government must take it back. However, the story is full of U turns wherein the Madrasas latched on to different rationales to somehow disobey the state government order.

On January 7, according to this Zee news article (Zee News), The Uttarakhand Madrassa Education Board (UMEB) refuted all the allegations. “According to Islam, the prayer room must not have a photograph of any living being. Any place other than the prayer room can have a photograph of prime minister Modi. Why would any Madrassa have a problem with that?” Akhlaq Ahmad Ansari, deputy registrar of the Board said on the issue.

On January 8, Darul Uloom fatwa department chairman was of the opinion that this order was against Sharia. According to an India live Today article (Against Sharia), The UMEB came out making it clear that the Islamic educational institutions coming under it would not adhere to the government order since it is un-Islamic . Within 24 hours, something that no Madrasa could possibly have a problem with became un-Islamic.

Another 24 hours passed and then came another statement. According to the Hindustan Times (HT),there was a change in the stance for the third time within 3 days . The government order became Sharia compliant again and it was said that Madrasas have no problem in installing the portrait of Prime Minister Modi inside the premises provided that the government gives it monetary aid. They further went on to say that installation of the portrait of the Prime Minister is a non-issue, but the real issue is of the monetary aid.

Under the scheme for Providing Quality Education in Madrasas (SPQEM),Seven Crore Seventy Lakh and Twenty seven thousand rupees have already been released for 194 Madrasas in the state. The point number 8 of the document suggests that No UC is pending in respect of these Madrasas. Also, the breakup of the fund suggests that the salary for all the teachers has also been released. Link to the Full document 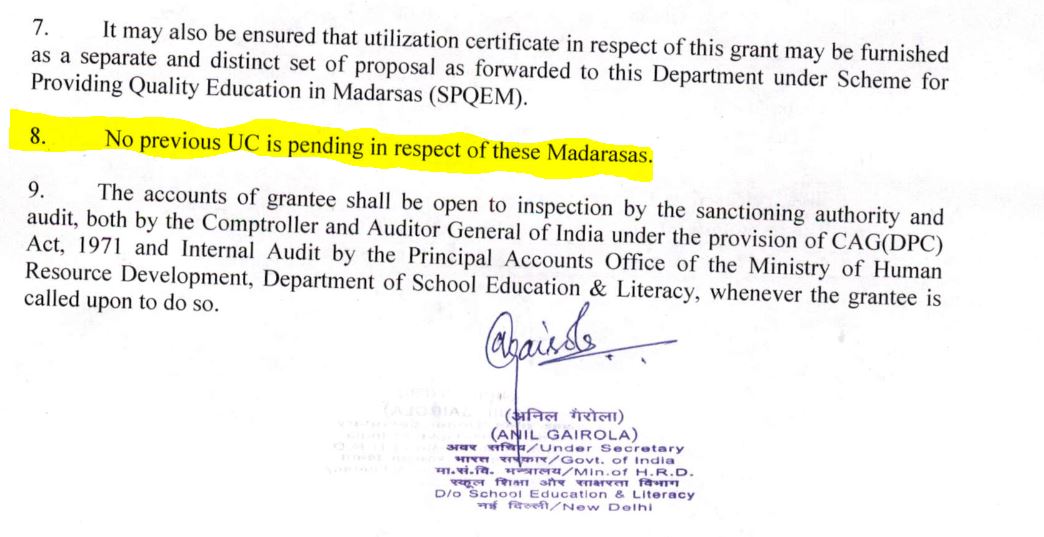 So what is the real issue here then? The arguments of the UMEB are like deliveries from South African pacers and I feel like an Indian Batsman trying to understand them, let alone attacking or defending them. The number of reasonings and counter-reasonings that the UMEB has put forth suggests that all they wished to do was somehow disobey the order. Anyway, it’s a democratic country and in a democracy, the Prime Minister must be respected. And the CM of Uttarakhand seems hellbent on ensuring that the PM’s portraits find their place in Madrasas of the state.