In the ancient times, India’s influence spilled far beyond the restrictive borders that currently restrain her. From the seas of Timor and Papua bordering the Pacific Ocean to the rugged mountains of Iran and Afghanistan, from the depths of the Indian ocean to the seas that separate Japan from the Asian mainland, India’s influence spread far and wide. This was not an empire in the sense we know empires today. India forged an empire, not with weapons, nor with imperial agents claiming to be missionaries, but with the powerful philosophy of Vedas and the Indic thought. This was an empire of mind that spread across thousands of miles, cut across by lofty mountains and serpentine rivers, populated by people who spoke different tongues, followed different customs but were united by a common culture. It would seem that it was Goddess Saraswati, the Goddess of Wisdom that had herself forged the Indosphere, unveiling an era of spiritual growth and blessing the region with peace and tranquility. 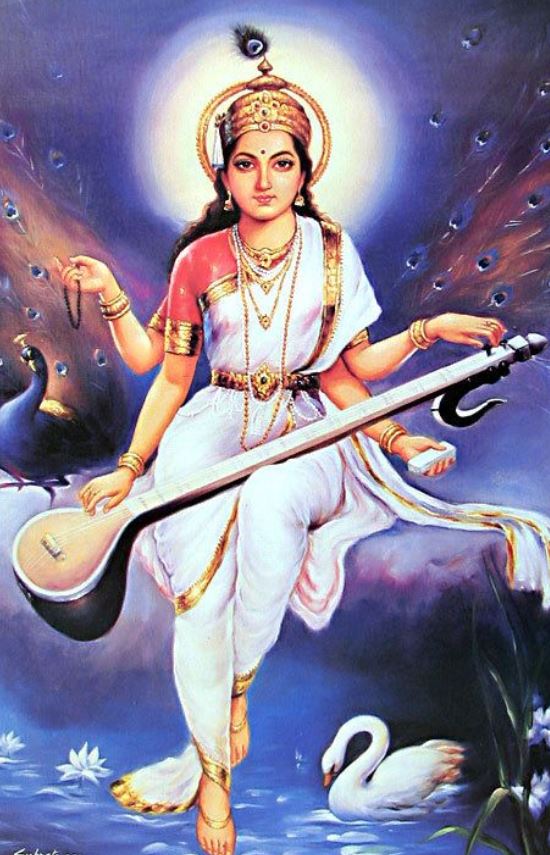 The festival of Vasant Panchami is dedicated, in large parts of the country, to Goddess Saraswati. Frequently portrayed as a beautiful maiden, draped in dazzling white, seated on a lotus and playing the veena, the imagery evokes a sense of serenity and tranquil, corresponding rougly to the idyllic Arcadia, frequently summoned by Western artists. The stotra:

desribes the grandeur of the Goddess and at the same time seeks her protection and blessings to rid one of ignorance.

As Indic culture spread far and wide, so did its manifestations. Goddess Saraswati, already revered in Indian mainland, was transported by those who carried Indic culture to hitherto foreign lands. Thus, Goddess Saraswati became a part of the cultural heritage of large parts of East Asia. In Myanmar, for example, Goddess Saraswati is worshipped as Thurathadi. Invocations to her are found in ancient viharas and temples. Given her status as the Goddess of wisdom, she is considered to be the protector of Buddhist scriptures. Even today, students pray to her before examinations to get her blessings.

In neighbouring Thailand, Saraswati is worshipped as Suratsawadi, the consort of Brahma and the Goddess of speech & learning. In Cambodia, Saraswati finds elaborate mention in ancient Khmer literature, sometimes as Vagishwari and even Bharati. She is praised as the Goddess of eloquence, writing and music. In Hindu Bali, Saraswati shares similar attributes to those ascribed to her in India. Saraswati day, marks the end of the local Balinese calendar and is widely celebrated among the local Hindu population.

In China, Goddess Biàncáitiān appeared as the Sinified version of Goddess Saraswati. The Goddess is praised extensively in the Buddhist Suvarṇaprabhā Sūtra, also known as the Golden light sutra. The Buddhist Sutra, which teaches that the Four Heavenly Kings protect the ruler who governs his country properly, became especially popular in neighbouring Japan, resulting in the Goddess Biàncáitiān, being adopted in Japan as Goddess Benzaiten.

Goddess Benzaiten is associated with anything that flows- water, speech, eloquence and wisdom. Like the Goddess Saraswati, who kills the three-headed serpent, Vritra, Benzaiten is frequently associated with dragons and snakes. There are numerous shrines to Goddess Benzaiten, across Japan, often located near a water body. Three of these shrines located on the islands of Chikubushima, Itsukushima, and Enoshima are collectively known as Nihon Sandai Benten or the three great Benten (another name for Benzaiten) sanctuaries.

India and her extended neighbourhood have more commonalities than that meets the eye. Shaped by a common culture, sharing similar mores, philosophy and outlook on life, this region can lead the way in showing the rest of the world a path to tranquility and wisdom- symbolized by their common heritage of Goddess Saraswati.

Early Elections? Enough Reasons why BJP may go for it