by Harsh Jaitak
in Economy
0

“India’s economy is likely to expand by 7.2% in 2018 and go up further to 7.4% in the following year on the back of strong private consumption, public investment and the ongoing structural reforms.” Before all the anti-Modi brigade tags me a ‘Bhakt’ for saying this and accuse me of misleading the nation, I would like to request them to transfer this tag to none other than “United Nations Department of Economic and Social Affairs (UN DESA).” The above statement has been published in a report titled ‘World Economic Situation and Prospects 2018’. The report further went on to say, “The outlook for India remains largely positive, underpinned by robust private consumption and public investment as well as ongoing structural reforms. Hence, GDP growth is projected to accelerate from 6.7% in 2017 to 7.2% in 2018 and 7.4% in 2019.”

Before trying to decode this report and what it tries to say, let’s try to understand the basic parameter on which the whole report is based – ‘Gross Domestic Product(GDP)’.GDP may be defined as the Market Value of all goods and services produced within a country for a given time period. To understand it further, assume that a TV Series made in the United States called Quantico was sold for $68 million to TV channels. Will it count in the GDP? The answer is a big NO. Will the gifts, donations and remittances sent by the actress Priyanka Chopra to family and friends contribute to GDP? The answer is again NO. Whatever is produced within the geographical boundary of India will only contribute to the GDP. Another thing to understand is that not everything owned by citizens will contribute to GDP. Tata Motors is the owner of a British Company Jaguar and all the Jaguars produced will not contribute to the GDP of the country. Likewise, the wages, profit, interest, dividend etc. from Jaguar (produced outside India) will also not contribute to the GDP of the country.

The next question is – How does GDP indicate economic growth?

GDP is calculated at market price and then inflation price adjustment is done using GDP deflator which gives GDP at a constant price. This is then used to measure growth rate over the previous year. The critics of GDP have a different view on this. The biggest problem they have is that it doesn’t take into account the income inequality. If a single person contributes 90 to GDP in one country and 3 people contribute 30 each in some other country, GDP of both the countries is still the same. This problem is tackled by World Bank’s Gini coefficient.

Earlier, Morgan Stanley expected India’s GDP growth to accelerate to 7.5 percent in 2018.This is backed up by the fact that after five quarters where GDP growth fell, the second quarter GDP growth came in at 6.3% (o.6% higher than Q1).This hints towards the recovery from short term impacts of the transitional phase due to structural reforms. In view of a template attack from the opposition that there is no growth despite rising GDP and a stupid argument that it is an election stunt; here are a few things you should look at:

Moody’s raised the rating from the lowest investment grade of Baa3 to Baa2, and changed the outlook from stable to positive. Why is the upgrade from a credit rating agency an achievement? India’s rating has been upgraded for the first time in 14 years. The biggest benefit of this is that it will unleash a fresh round of portfolio investments and make external commercial borrowings cheaper. This will stimulate the economic growth and this is exactly what the opposition doesn’t want you to believe with its bogus criticisms.

Let’s look at the parameters on which the report is made. According to the World Bank, the parameters were “reduction in procedure and time to obtain building permit, easier access to credit, protection of minority investors, ease of paying taxes and making resolving insolvency easier”. An improvement on all these fronts means more business which in turn means more growth 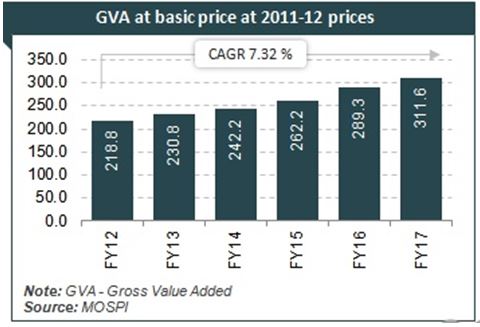 This infographic speaks volumes about the success story of the manufacturing sector in India in which Make in India had a huge role to play as a policy. Apart from that GST has resolved many pertaining regulatory issues. Such a high growth will create more jobs which ultimately will again lead to the overall growth .There is no magic wand that will increase the jobs suddenly and it is a gradual work in progress with some positive signs .

Either all the credit and rating agencies have lost their sense of economics or the opposition have super intellectual economists and investment professionals that these agencies can’t afford. Credit should be given wherever necessary and the fact that almost all the credit and rating agencies are optimistic about future growth adds a lot of faith and credibility to the economic policies of the NDA government.

The continuous rant of the opposition is that these GDP figures are wrong. The problem with this logic is that when a source gives a figure of GDP slowdown, the opposition accepts it wholeheartedly and blasts at the government whereas when the same source gives a figure of economic growth, they refuse to accept it. The only logic from these double standards is the unending desperation.

Some intellectuals say that people are not picking up bank loans and private capital investment is low .In such a scenario, how can GDP increase? Let us catch their bluff.

Talking about private capital investment, it’s at an all time high. 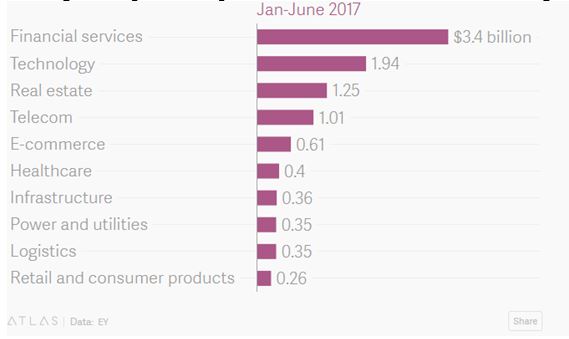 This infographic is from a report by audit and consultancy firm EY. In the first six months of 2017, PE and Venture Capital (VC) investments in India exceeded $11.2 billion. This was around $8 billion in the same period last year.

High exit deals mean more investors have managed to get their money back. This has grown by 53% which is a significant improvement and a positive sign for future investments.

As far as picking up bank loans is concerned, Union Minister Rajyavardhan Singh Rathore  said on record that under Pradhan Mantri Mudra Yojana, almost 9 crore people have been given a loan of Rs 4 lakh crore. The government has been able to provide access to institutional finance to the under-funded sections of the society which has stimulated growth.