Was Adultery Allowed in Ancient India? Did Women Walk around topless and Was Sex a Public Affair back then?

by Saswat Routroy
in History
3

Yesterday, I was watching the trailer of the serial “Porus” which is aired on the Sony Entertainment Television. I was surprised to see the makers showed Alexander in clothes instead of showing him naked. The Hellenistic era, which is the period between the death of Alexander and the emergence of the Roman Empire, exhibits various sculptures of Greek Gods, kings, rulers, athletes, common human, etc. in nude physique. If a post-Alexander era did not know about clothes, then how did Alexander wear clothes? 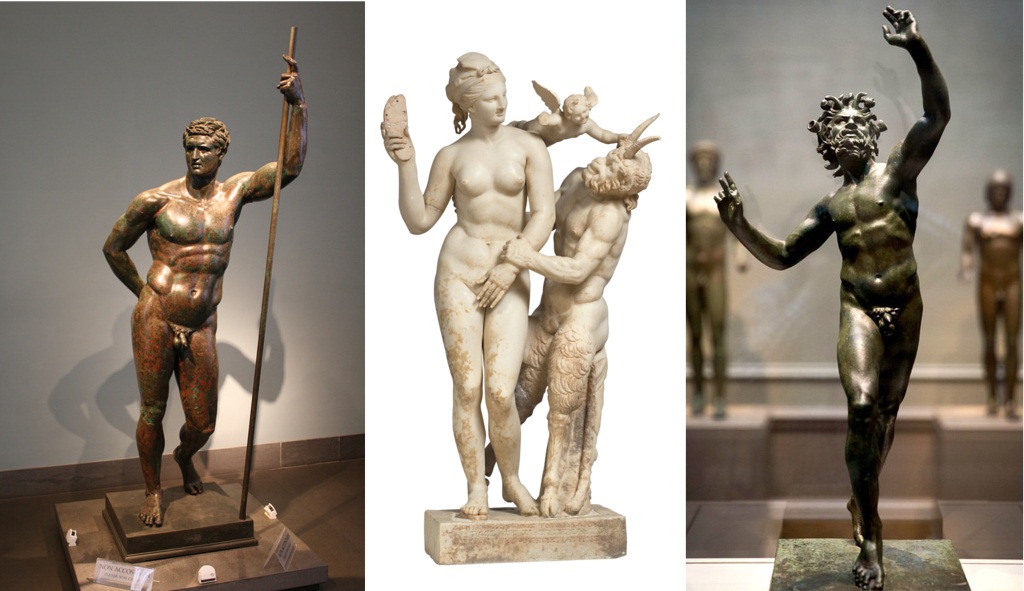 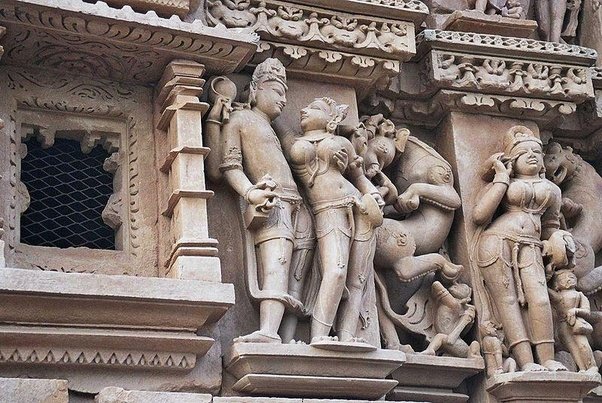 The idea is wrong. Sculptures are forms of art and often, artworks are the imaginations and fantasies of an artist. A sculpture alone cannot be a solid testimony about the then current social structure, culture and philosophies. For an example, I am a painter and along with many other themes, I have painted both male and female nude paintings too. Suppose our civilization ends tonight. After 2,000 years, some archaeologists from future dig out my painting book. It will be wrong of him to interpret that people of 21st century did not wear clothes. 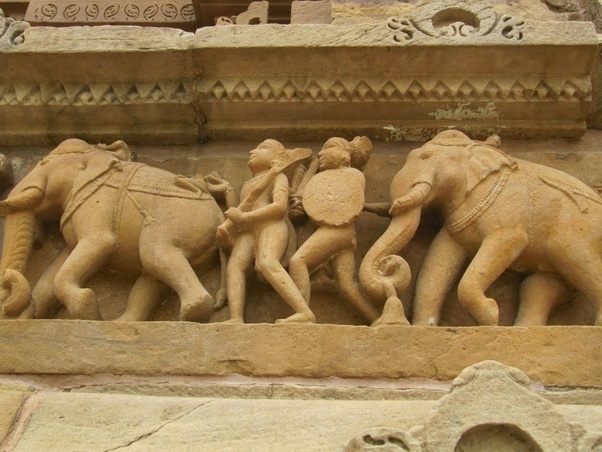 Why are sculptures in ancient temples mostly nude?

Artwork is the imagination and fantasy of an artist. The ancient artists were often encouraged by patrons like kings, rulers, emperors, etc. Nudity is the natural form of any living beings and animals, birds, plants, etc. do not wear clothes. Human beings come to this world sans any clothing. Artists of ancient India wanted to depict their subjects closer to nature. Thus, the temple figures are in their most natural form- semi or full nude forms. How could an artist depict the physique of a deity if he makes the deity wear a big cloak by carving the rocks?

However, the sculptures are different from the social life of an individual of that time. India was one of the earliest places where cotton was grown and buttons were invented first, even as early as 2500 BC during the Indus-Saraswati Civilization. During the Kalinga war and Ashoka’s empire (262 BCE), people used to wear civilized dress made up of cotton. It is highly unlikely that the people during the era of Khajuraho (12th century CE) were not accustomed with dress and cloth.

Temples were not only the places of worship. They were also the places of philosophy and knowledge. Ancient Indians considered sex as the essence of life because it gives birth to a new life. They considered sex a mutual duty between a married-couple. Knowledge on this topic was essential for the husband and the wife to keep each other happy. During those periods, temples were also like knowledge centers, which people used to visit during pilgrimage. To make people aware about knowledge on sex, these sculptures were implanted. Since this knowledge was made associated with temples, people used to consider this pious. In fact, since people were not free and open to discuss about sex publicly, the sculptures acted as a visual lesson for the people. Today we can see awareness programmes on safe sex, contraceptive pills, condoms, family planning, etc. TV, radio or other mass-propagating media were not invented at that time and hence, these sculptures acted as a media to propagate knowledge. 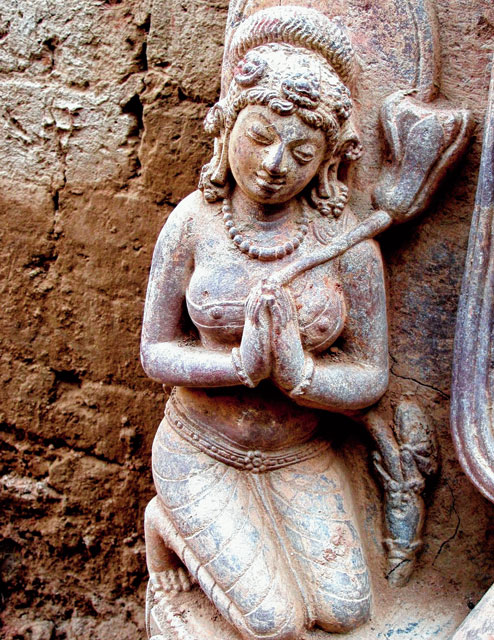 In ancient India, a man’s life was divided into 4 parts-

Did ancient Indian women use to cover their breast or keep it bare?

Many historians assume that ancient Indian women did not use to cover their bosom. However, it is highly wrong to make such assumption by looking at the sculptures of some temples. The following three images show sculptures from Parashurameswar temple (500 CE to early 8th CE) in Bhubaneswar, Odisha.  The breasts of the deities are covered with a strip of cloth. 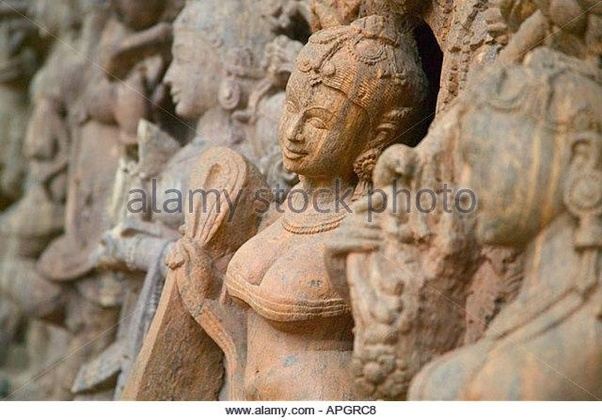 The three images given below are from the archaeology section of National Museum of Kolkata. In each statue, a body-tight strip of cloth covers the breast. From left to right and then bottom, the above three sculptures are from 10th CE, 12th CE and 11th CE- almost the same period when Khajuraho temples thrived. While Khajuraho temples show idols with bare bosoms, temples from same period but different location showed use of cloth to cover the breasts. 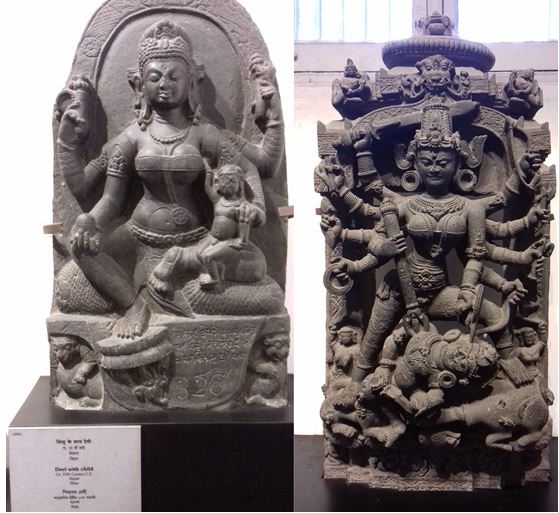 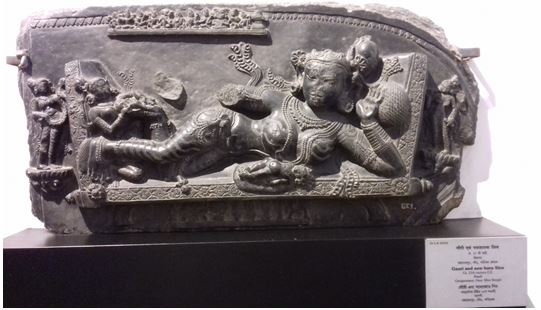 There are many instances to prove that ancient Indian women wore brasseries. The first historical record of brasseries in ancient India is found during the reign of King Harshavardhana (1st century CE) in Kashmir. The literature works of that period mention about half-sleeved tight bodice called kanchuka. The Basavapurana (1237 A.D.) mentions about young women and girls wearing kanchuka. Great poet Harihara refers about a tight white garment called bigidudisi. Certain records state that sewn brasseries and blouse were very much a part of dressing trend in the Vijayanagram Empire and the tailors who specialized in this garment were called chippiga.

The Suta Samhita states about list of offerings, which include vasottariyam (upper garment). The Kalika Purana mentions about five different types of clothing which include upper garment and lower garment. In some of his works, Kalidasa mentioned about a breast garment called kurpasaka. The sculptures of Gupta period also prove that such garments existed. In his work Sisupalavadha, great poet Magha mentioned about tightly fastened jackets worn by the ladies in the palace of Lord Krisha. The 10th-century Leelavati Prabandha refers to tailored brassieres as a popular trend.

The ancient India was a great piece of land, which was even three times bigger than the current 21st century India. This vast land had many tribes, communities, 16 big Mahajanapads (metropolis), empires, kingdoms, etc. On one hand, we had empires like Mahishmati, Kalinga, Magadha, Anga, Kamboja, Kashi, Avanti, etc. on the other hand there were tribes like Bonda, Bheel & Jarwa.

Many Western Scholars had played a great part in developing the idea that ancient Indian women never covered their breasts. In his book called “The Wonder That Was India”, A. L. Basham stated- “for many centuries Indian women did not wear upper garments except during winter in certain parts of northern India”. He specifically mentioned the Nayar tribal women of south India, who were topless until the mid-20th century. In the example, Mr. Basham himself took the example of tribal community women. The artists, who had built temples of Kahujaro and Konark, were from the Mahajanpads (metropolis) under the patronage of kings, rulers and emperors. It is unlikely that they would add social scenario of tribal communities instead of the life style of royal families, common citizens and deities. The arts of Khajuraho, Konark, etc. are simply artistic depiction of imaginary fantasy because clearly, the above literatures suggest that ancient Indian women covered their bosoms.

Many historians often mention about the Travancore women who were topless till early 19th century. In reality, that was a forced custom where the lower class women were not allowed to wear upper-body dresses. The women were topless not due to modernity or will, but because they were forced and hence, felt humiliated. In fact, no other women were allowed to wear upper body dresses except the upper class women. Due to this, the lower class women revolted against this oppression, which is known as Channar revolt. If nudity was a norm widely, why did these women protest then? On one hand, we had oppressed class like women of Travancore. On the other hand, we had respected temple priestesses of Pandyas. It will be wrong to say that ancient Indians practiced nudity as a mass-culture.

Was sex a taboo in ancient India?

The ancient texts, scriptures and legends depict many stories which suggest that sex between unmarried persons or sex outside marriage without spouse’s consent were not widely accepted by the society of ancient India. The legend of Khajuraho says there was a Brahmin priest who had a beautiful daughter called Hemavati. Once when she was taking bath in Rati, the Moon God saw her and was mesmerized with her stunning beauty. He seduced her and a child was born out of the union. The unwed mother was unacceptable to the society and she was forced to take shelter in the forest with her son Chandravarman.

Similarly, Kunti had to leave her eldest son to avoid society’s question. If sex outside marriage was not a taboo, why did Kunti leave her son and why did Hemavati go to forest? On the other hand, look at the birth of Dhritarashtra and Pandu. The whole society knew about their birth but it was not considered a scandal. In fact, to keep the lineage of the Vansha alive, the union between Vyasa Deva and Vichitravirya’s two wives Ambika & Ambalika took place with the consent of the elders- queen Satyavati being the prime factor.

Were ancient Indians open and free about sex?

Ancient Indians always considered sex a private affair practiced behind closed doors or somewhere where nobody is watching. The episode of birth of Kartikeya states- when Devas mistakenly approached and disturbed Lord Shiva and Parvati while they were making love, the couple felt embarrassed and hastily withdrew. This proves that religious texts too, suggest that ancient Indian society considered sex as a private affair.

Let me quote from a site “History of Sex in India”:-

“The epics of ancient India, the Ramayana and Mahabharata, which may have been first composed as early as 1400 BCE, had a huge effect on the culture of Asia. These texts support the view that in ancient India, sex was considered a mutual duty between a married couple, where husband and wife pleasured each other equally, but where sex was considered a private affair, at least by followers of the aforementioned Indian religions”

If ancient Indians were not open about sex, how did Kamasutra came into existence?

The composition of Kamasutra does not mean that ancient Indians were engaged in sexual activity every now & then. Kamasutra is nothing but a book containing science regarding sex. It does not testify that the average common ancient Indian was addicted to sex or engaged in sexual activity publicly. To educate people about the science of sex, Vatsyayana composed the theories on sex. Nowadays, class 12 biology books of CBSE and CISCE boards have reproduction cycle in syllabus. The main point is to teach students about reproduction cycle. A doctor knows about body science and he knows how to dissect a human body. That does not mean the doctor kills someone by cutting him or her.

Without solely relying on sculptures, the study of the ancient Indian epics and scriptures gives us an idea of the social culture and dressing trend of the contemporary eras. Even though Ramayana and Mahabharata are religious epics, they speak about the social life and culture of the period and suggest us to lead a life that was considered “ideal” by the authors of the epics.

[Note: The above article is a modification and detailed write-up of another write-up by me, which I wrote on Quora under a different penname.]

I am heartily thankful to Security-in-Charge Joydip Das of Indian Museum (Kolkata) for his cooperation and permission to publish images from museum.