No Result
View All Result
Newswire
Jadeja batting ‘freely’, gives CSK something to smile 19 mins ago
Twitter took votes away from Trump in 2016 US polls: Study 34 mins ago
Jessica Chastain, Anne Hathaway team up for Mothers’ Instinct 37 mins ago
YouTube generates $5bn in ad revenue for Google in Q3 37 mins ago
PAU experts clear the air: Punjab smog highly unlikely to reach Delhi 37 mins ago
RJD attacks Nitish govt for not providing security to Tejashwi 43 mins ago
Next
Prev

by Akhilesh Mishra
in Analysis
0

The 2G verdict by the CBI judge Saini has attracted a lot of attention for the seeming way the accused have been let off, even though the 2G scam was considered to be real enough and it is on this basis the SC had actually cancelled 122 licenses in 2012.

The judgement by CBI court Judge Saini seems poorly argued and one that does not appreciate vital evidence. In one instance it even seems to rule against the SC decision on the same issue. Some of these have been hotly debated in the media and on social media since the judgement was delivered by Judge Saini on 22nd December 2017. This post attempts to structure some of the issues arising out of the judgement.

An argument has been made that the charge sheet was filed in 2011 and that it was primarily this inadequate charge-sheet, and faulty prior investigation, that allowed the accused to be let off. However, others have argued that what did Modi government do post 2014 if this was indeed the case?

The entire 2G case was being monitored by the SC, including appointment of prosecutors.  Investigation was finished in in 2010-11 and charge-sheet was filed in 2011.  The CBI between 2011-14 had built its entire case, with filing of evidences and other documents. It is important to remember that no new investigation was ordered in 2014 when government changed. For the trial court,  it was a continuing case since 2011 and not a new case with new investigation or with evidence discovered from scratch. The change in the political party leading the government meant nothing for the trial court since ostensibly it was dealing with a government agency in continuum. This has important bearing on what happened post 2014.

Between 2011-14, the CBI had filed multiple documents and evidences and at various junctures. Now it is a settled judicial doctrine that the prosecution must in advance reveal to the accused the charge they are making so that the accused have an opportunity to prepare their defense. In exceptional circumstances, additional documents or evidence, or supplementary charge-sheet can be brought in. However, it cannot be an endless practice and the SC has ruled as much. Why is that so? So as not to prejudice the defense of the accused by endlessly filing new material and compromising his defense. Now for the trial court, lot of material had already been filed by 2014. Hence, when the government changed and it sought to file fresh material the court frowned but allowed only once in Aug 2014. When the government tried again in Feb 2015, the court expressly refused.  So essentially, the trial was entirely based on material and evidence collected and framed before 2014.

Below are extracts from the 2G judgement affirming the same. 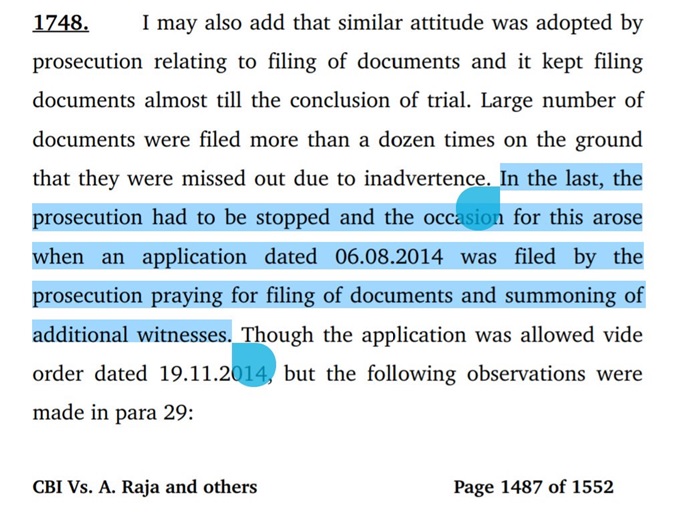 There is an additional point of note here which pertains to material and conduct of CBI before 2014. Ashwani Kumar was CBI Chief from 2nd Aug 2008 to 30th November 2010. This is a crucial period as it was during his tenure that initial investigation was delayed as the court has recorded in its judgement. From 30th November 2010 to 30th November 2012, A.P. Singh was the CBI chief.  It was during his tenure that the final end of investigation was done in a manner that the court has now decided not to consider those evidences. Also the charge-sheet was filed and initial documents and evidences produced during Singh’s tenure. From 3rd December 2012 till 2nd December 2014, Ranjit Sinha was the CBI chief.  Now all of these names are important. How?

Ashwani Kumar was made governor of Manipur and Nagaland after his retirement as CBI chief. The next chief, A.P. Singh,  is now an accused himself and facing CBI probe in a case of corruption along with meat exporter Moin Qureshi. And what about Ranjit Sinha? He was in fact barred by the SC from 2G case in November 2014, because of allegations of trying to scuttle it.

So, every CBI chief under UPA era, during the time-frame of the 2G case, has some suspect antecedents. As for for what Modi government did in the 2G case after taking over? Remember, the only time it was allowed to file any fresh document was in August 2014. At that time Ranjit Sinha was still the CBI chief.  SC just 2 months later asked him to keep off the case for trying to scuttle it. After Sinha’s  retirement, when the CBI tried to file fresh material in 2015, the CBI judge disallowed it.  So essentially, as the case stood,  all the material and evidence on basis which the 2G judge ruled, was from UPA era and in tenures of people with suspect antecedents.

Faulty investigation and how it compromised evidence

We have already seen the kind of CBI chiefs that were there while UPA was in power. But what impact would evidence collected (or not collected), and the process followed in that period, would have on the judgement? Just one example would suffice. Additional P.S. to Raja became an important witness in the case and he testified in court (and not in front of police) that Raja used to meet the other co-accused in the conspiracy, some of them as many as 20 times and more during the months the scam was perpetrated. But what did the CBI judge did with this testimony? Read the extract from the judgement below and why the court said his testimony is of no value? We have seen the antecedents of both the CBI chiefs during this period during which  this delay took place. 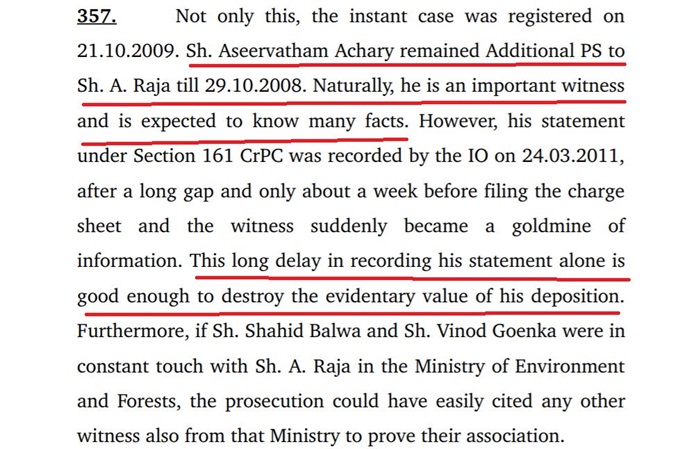 The crux of the charge against Raja was that he changed the cut-off date for 2G license application from 10th Oct 2007 to 1st Oct 2007 to benefit one company. The SC had already ruled on this in 2012 and found it arbitrary and capricious.  Curiously, the 2G Judge now has found that there were good reasons for this change. This seems rather strange, for a trial court to to rule on a subject matter already decided by SC ! Below is an extract form the judgement of the trial court. 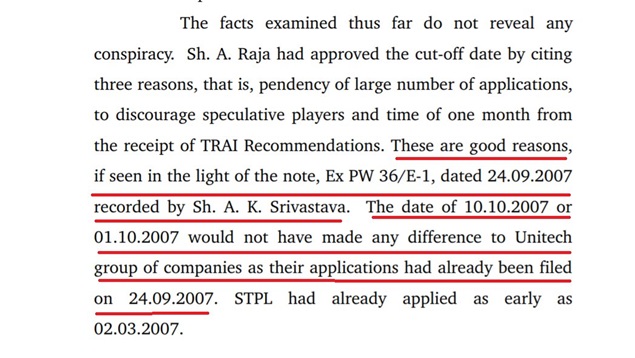 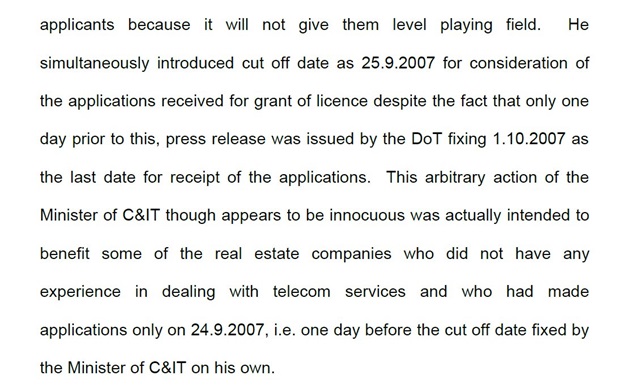 The role of PMO, Manmohan Singh and “Unknown Hand’

The 2G court of Judge Saini has made scathing remarks against Manmohan Singh’s PMO officials – Pulok Chatterji and TKA Nair. The court has found that Raja was very clear what he wanted to do but Pulok Chatterji deliberately misinformed Manmohan Singh so that scam could take place. In essence, Raja had written letters to Manmohan Singh informing him that licenses would be issued to those who made DD payment by cut-off date (and cut-off date was arbitrarily preponed so that those who were of it in advance could comply while rest were unable to do it). This was the crux of the scam. However, as per court,  Pulok Chatterji misinformed Manmohan Singh therefore allowing the scam to take place and only when the scam became national news did he went into damage control. Below are extracts from court’s findings. 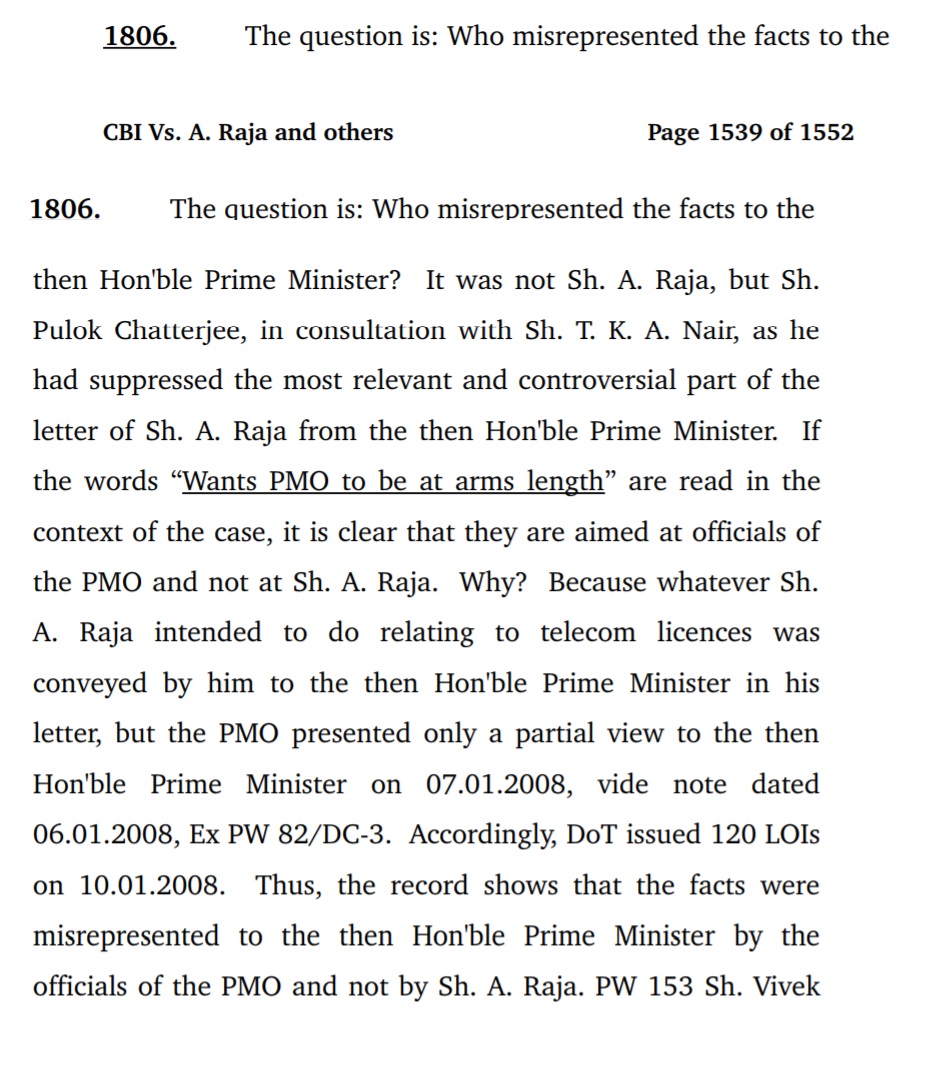 Now who is Pulok Chatterjee? He has long history of association with Gandhi family, serving in PMO of Rajiv Gandhi and then in Rajiv Gandhi foundation and then as OSD to Sonia Gandhi. The media has consistently described Chatterji as a family loyalist, when he was appointed as Additional Secretary in UPA-I and when he became Principal Secretary in UPA-II.  So the question is, whose loyalty and interests was Chatterji serving when he concealed information from Manmohan Singh as the CBI court judge has found? And if Manmohan Singh was actually misled or was completely unhappy with the events of 2007-08, why did he allow Chattreji to return in 2011 at even higher grade, this time as head of PMO?

The CBI has already come out with a statement that it will appeal the case. When the case will go in appeal, the government / CBI will have liberty to argue the case from start (not trial but fresh arguments without history of previous arguments under UPA). CBI will also have independence to appoint a new prosecutor. Evidence of eye witnesses and approvers, discarded by 2G Judge for mere technicality, will be argued again. The fact that trial judge has apparently ruled against SC finding will surely be noted in appeal. All this makes a strong case for appeal and possible overturning of the judgement. And finally, the light thrown by CBI judge on role of PMO can also be looked at.

Fodder Scam: Lalu Yadav Convicted, it is going to be tough for the RJD