Sometime in the beginning of this year, in the year of our lord, 2017, India’s Supreme Court had outlawed seeking votes in the name of religion. The court ruled that ‘Religion has no role in electoral process which is a secular activity’. The judgement was tom tommed as a much needed underlining of our secular credentials given the establishment of a fascist Hinduwadi government in the country. As a matter of fact though, it is Churches and Mosques that are more given to issuing pronouncements for or against political parties during elections. In several Christian dominated states, it is the Church’s writ that runs large in determining the fate of a candidate. Similarly, it is fatwas issued by Muslim clerics that openly seek favour or disapproval for a candidate. The Supreme Court’s judgement makes it illegal for such canvassing to happen openly. Therefore, new strategies have been evolved to coax and goad the electorate into making the right choice while staying on the right side of the law.

In Gujarat, for instance, a letter issued by a venerable leader of the Church warns his readers of that the ‘secular and democratic fabric of our country’ is in danger. Like the Biblical doom and gloom, he warns his audience that ‘nationalist forces are on the verge of taking over the country’. There is also the standard, oft-repeated bit on human rights being violated, churches being attacked, minorities and weaker sections feeling insecure etc.

With the context firmly set, the Archbishop exhorts the readers to vote for people who ‘remain faithful to the Indian constitution and respect every human being without any discrimination’.

He then goes on to lecture the readers on the power of the rosary and how the Christian faith defeated the Islamic invaders at Lepanto and the Godless Communists in Eastern Europe by the faith in Lord. Nowhere does his eminence break the law by directly exhorting his flock to vote against the BJP, but the implications are clear- BJP, clearly the only nationalist party left in the country, needs to be defeated. 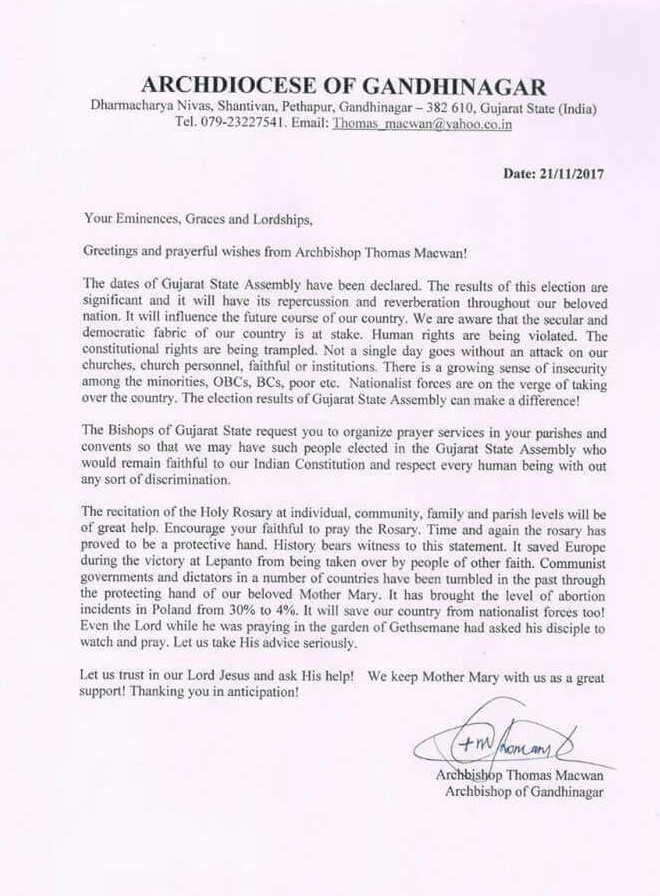 It is not only Gujarat, where such calls to defeat the BJP have been made by men, purporting to work in the name of God. In Goa, with nearly 25% Christian population, which went to polls earlier in the year, the Church had directly and indirectly campaigned actively to bring about the defeat of the BJP. In an article published in Goa at the time of elections, NDA government was compared to Nazi Germany and terms such as ‘Constitutional holocaust’ were mentioned. The Church had moved heavens and earth in exhorting people to deny BJP & Manohar Parrikar a second term. As God would have it, BJP stitched together a post poll alliance and Manohar Parrikar returned at the helm in Goa. ‘Deus Veult’ as devout Christians would say.

Even before the Supreme Court judgement, the Church has actively and pervasively sought to interfere in the electoral process by lobbying for its candidates. In Mizoram, for instance, in 2013, Church bodies even asked the Election Commission to change poll schedule in view of statewide conferences being planned by the Church at the same time. In Nagaland, posters were openly put up by Church bodies, describing elections as a ‘spiritual war’ to ensure adherence to Christian morals by staying away from substance abuse, sexual immorality etc.

Last year, during elections in Kerala, the Church had asked its flock to vote for the UDF that had promised to introduce Prohibition in the state.

During UP elections, there were multiple fatwas issued exhorting devout Muslims to vote against the BJP. Even during Delhi elections, Imam Bukhari had asked Muslims to vote for AAP. The Church and the Mosques wield enormous political power, given their centralized structures and their ability to influence a significant vote bank. Temples on the other hand, are highly de-centralized and given the Hindus’ penchant to spar over castes, languages and other parochial divisions, a writ by any temple is as useless as a 1000 rupee note. The Supreme Court’s order, therefore, is now being openly flouted, not by canvassing for a candidate but by canvassing against other candidates. The letter written by the Gujarat Archbishop is an excellent example of the same.

It would have been better if the Archbishop had not referred to the triumph of Christianity in Europe in his letter. After centuries of onslaught on native cultures, Christianity is now beating a hasty retreat from Europe. Church attendance is falling and more and more people are happily leading their lives outside Church’s shadow. On the other hand, in India, where Christian communities have thrived ever since Christ’s times, the Church is seeking defeat of ‘nationalist powers’. Why? So, that India can once again be enslaved by a foreign nation, as long as it is Christian? Instead of partaking in the growth of nationalist ideas, the Church is only alienating itself from the masses by portraying itself as opposed to nationalist ideals. May the Lord give it wisdom and strength.

Rahul Gandhi’s Elevation as The Congress President does look like his First Big Victory, but it is his Loss