Born a Bengali, my world of cricket was eclipsed by Sourav Ganguly’s debut at Lords. And like most of the fans of this nation, it took me a while to realize that there was another young man, who had played equally well if not better than Ganguly on that day. He fell five short of a century and as weird are the ways of stardom, the five-run deficit made sure he stayed away from the spotlight. There were no glamorous champagne bottles and certainly no lucid columns. This young man was Rahul Dravid. 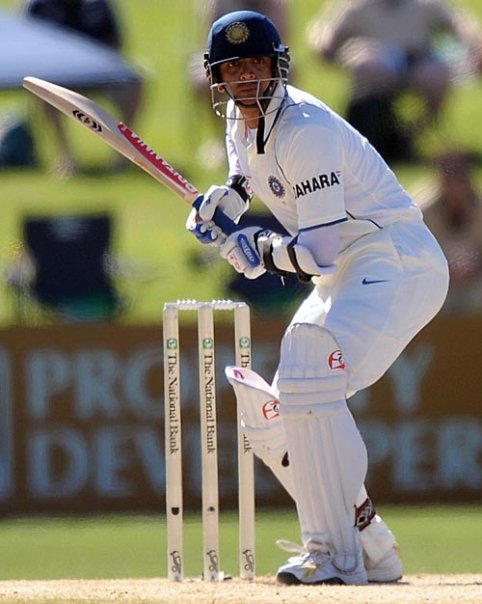 His debut at Lord’s was almost by accident. On the morning of the first day of the Lord’s test, Sanjay Manjrekar was nursing an ankle injury. The then coach Sandeep Patil had informed Dravid that he would get to play only if Manjrekar failed the test. Manjrekar failed. And the rest is history. However, Dravid had eyes on the Lords Hall of Fame. He and his Karnataka team-mate Venkatesh Prasad had made a pact. One would get a century and another would get five wickets and would make their place in the famous board at Lord’s. Prasad’s name appeared on the board after that test. Dravid took another fifteen years. But the foundation stone to the ‘Great wall of India’ was laid that day.

Today, on the 11th of January he turns forty-three. And even though his scorecards, records and statistics are glittering examples of brilliance, what has always inspired me is his journey to being Rahul Dravid, and the resilience to hold on to the middle-class values that were the foundation to his success.

The man who went on to be Mr. Dependable had actually started playing cricket in gullies of Bangalore’s Indiranagar. The Bangalore of the seventies had much more space than what we see today and young boys would compete with boys from another lane. The winners would take home pencils, little shields and things like that. Little did Dravid know that one day he would be taking home the Arjuna award, the Padma Shree and the Padma Bhushan.

Rahul Dravid’s formal education in cricket started only when he was thirteen years of age. But even when he was in class four, on the very first day of his school at St Joseph’s he was pretty clear that he wanted to be a cricketer and play for his country. He was also on the hockey team of his school and performed with equal grit.

Like any middle-class family, Dravid’s parents were worried about his academic performance. But Dravid had perfection in his mind even if it meant on the sheets of answer scripts. For Dravid, this balance was not a joy ride. Form Indiranagar he would go to KSCA and immediately to school. With both parents working, he did not have the luxury to be picked up or dropped to school by them. So with food packed from home, cricketing gear and, of course, his school books he would rush to school and then to Webbs ground for school nets.

Dravid, whose wicket-keeping skills were much talked about in the World Cup of 1999, had actually romanced it at a much tender age. In fact, his inclusion to the South Zone Under-15 team was due to his wicket keeping skills. This is a phase where his school came up as a pillar of support. The principle had given him a go ahead to put in those extra hours at the nets. And this was the time when he worked at the KSCA nets from 6.15 to 9 a.m. Then he would change to his school uniform in the deserted Western Stand and be off to school. Dravid knew that if cricket failed he would have to still earn a living. And this man who is a legend today would stand holding a handle in crowded buses of Bangalore and read his lessons. Today that city has a wall made of ten thousand bricks which are dedicated to him- the ‘Wall’.

His teacher from school Ms Neena Kulkarni fondly remembers Rahul Dravid and also an incident from his school days. Having failed to do his homework, Dravid stood outside the class, even before she reached it. He confessed to his fault rather that quietly sitting back. This attitude was clearly seen on the field and at times I as an ardent fan wondered why he never gave back to the obnoxious sledging. His mischief probably was limited to innocent things like his classmate Dominic D’cruz recalls. When they were in the fifth standard, the entire class was making a ruckus and the teacher had warned them to keep quiet. Dravid, confident that the entire class would continue screaming went about his mischief. The class, however, had fallen quiet. The now known sober ex-Indian captain was actually caught and thrown out of class.

His wife says Dravid probably lost his calm only once at a dressing room and threw a chair. Unlike the ugly spats, fingers going up and shirts going down, Dravid probably doesn’t have many such incidents. But this man had once cried in the entire day for a runout. One of his biographers, Vedam Jaishankar shares how Dravid had got run out for no fault of his without facing a single ball. And then Dravid just couldn’t be consoled.

Dravid also held on to simple superstitions. He had once worn something new on a match day and had done well. And that tradition continued. It could be a sock, a handkerchief or a pin, but it had to be new.

Dravid had eclipsed my idea of perfection and probably even men. I was never one of those who would be active in the school basketball field, but I would watch the Sahara Cup only for a glimpse of Rahul Dravid. My friends would find my craziness weird. I was some 15 years of age at that time and with the Khans at their peak, I chose cricket matches over films. In an all-girls Convent I didn’t get much chance to discuss cricket. Had my friends watched Dravid as closely as I did, they’d know what made him special. I am certain today many regret having missed watching one of the finest players write history.

Dravid’s arrival was ‘necessary’ for Indian cricket. Slowly but steadily this man was to rewrite India’s performances abroad. It probably started with the winter tour of South Africa. And it was the Durban test when India was bowled out for 66 and Dravid stood his ground at an unbeaten 27, his being the vanguard of the team had become certain. Though the series was lost, his maiden hundred at the Wanderers Johannesburg is remembered to this date.

Later the dual with ‘The White Lightning’ at the Tri-series final at Durban showed us his resilient side. Probably Donald hadn’t expected a young cricketer to handle his bowling so effortlessly and had sledged probably even after the game had got over. Had it been today, Donald would have trended on social media for at least a couple of days. It was heart-warming to see Tendulkar intervene. And it was also embarrassing to see a senior cricketer behave in that deplorable manner.

The team was back to India with two series losses but they sure had found their best test cricketer.

Prior to South Africa, Sir Garfield Sobers was impressed with Dravid’s performance at Canada. Thus playing on foreign soil and benefiting the team was becoming a habit for him. His twin hundreds in both innings of a test at New Zealand made him only the third Indian batsman after Vijay Hazare and Sunil Gavaskar to achieve the feat.

Sometimes I really wonder why some people have always ‘branded’Rahul Dravid as a test cricketer. His exploits in 1999 World Cup took him to the top of the points tally and made him only the second Indian cricketer after Tendulkar to reach there. As we watched his batting in awe, Dravid kept enthralling the English audiences. The England shores are sure to have some connection with Dravid and so does the English fan. Rahul’s bravery, modesty, and class make him much loved there and many in England don’t consider it sacrilegious to call him the finest cricketer of India. The Indian team won a test in England in 2002 with Dravid’s defining innings of 148. What makes this special is this was a win in England after a period of 21 years. His last few matches before his retirement made his place not only in the Lords Hall of Fame but also got him rave reviews in English dailies.

Dravid’s best batting performances came in the 2002-2006 period with an average of 68. 4. At Adelaide in 2003, when India won a Test in Australia for the first time, he put up a double hundred. A few months later, came another 270 that bagged India’s first series win in Pakistan. In 2006, India also won a series at West Indies. The only other test they won was way back in 1971.

Just a glance at India’s performances in this period and one would realize why Dravid’s ‘coming’ to Indian cricket was necessary. A century at every test playing nation’s soil, Rahul Dravid has left his signature everywhere.

His contribution echoes in the words of his teammate Virender Sehwag, “I don’t think a player like Rahul Dravid can come into the Indian cricket team (again). Especially his performance in overseas matches can be hardly matched by any player.”

Today, on his birthday, I take this opportunity to thank him for giving us the pleasure of viewing his performances on the field and his classic lectures off the field.