Arunachal Pradesh is in the midst of a political crisis. Even as the Government, the Opposition, the Governor and the Rebels fight it out in the Courts, the Central government seems to have decided that it has had enough. News reports indicate that President’s rule has been imposed in the sensitive border state. A not so unexpected hue and cry over ‘murder of democracy’, ‘Modi is a dictator’. ‘weakening of federal structure’ has ensued. Amidst all this noise, it might be pertinent to understand what has happened in Arunachal Pradesh. It is also important to know that while Arunachal Pradesh is nestled in the distant North East, it frequently finds itself in the centre of Sino-Indian border disputes. It is worth mentioning that many of the great battles of 1962 were fought in areas that today make up Arunachal Pradesh. Even today, the need to beef up security in Arunachal Pradesh is reiterated by all parties irrespective of their political ideologies. Modi government too has from time to time made announcements of stepping up border defence in Arunachal Pradesh.

What is happening in Arunachal Pradesh? 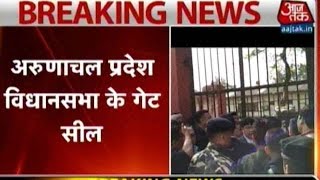 Political instability was knocking at Arunachal Pradesh’s doors even before assembly elections were held in in April 2014. Allegations of graft against Chief Minister Nabam Tuki had been circulating for some while. In fact the High Court’s decision asking CBI to initiate an enquiry was stayed by the Supreme Court and is still awaiting final verdict. At this time Nabam Tuki decided to advance the elections due for October 2014, which turned out to be a masterstroke and resulted in a landslide victory for Congress. Congress Party won 42 of the 60 seats in Arunachal Pradesh Legislative Assembly. Nabam Tuki, the incumbent Chief Minister was reinstated following the elections. Nabam Tuki is a Congress old-hand and a Gandhi family loyalist.

Up to the 90s, Arunachal Pradesh was believed to be an oasis of political stability. However, since then, the state has been plagued by cases of defections, rebellions and frequent changes in power. In April 2015, Nabam Tuki dropped Health Minister Kalikho Pul from his cabinet. Not only this, Tuki had Kalikho expelled from the Congress on account of financial mismanagement. The stage was now set for confrontation that would shatter political peace in the state. From September-October last year, reports of ‘all is not well’ in Arunachal Pradesh government started trickling in. The Congress legislative party had effectively split into two groups. Pro-Tuki groups regularly presented themselves before Media, showing that they were in Control while the ‘rebels’ camped themselves in Delhi, seeking an audience with Sonia Gandhi. Sonia Gandhi’s failure to entertain the ‘rebels’ resulted in a situation where they openly announced that their fight was against Tuki’s failure to tackle “mismanagement, financial mess and corruption”. In the meanwhile, senior cabinet ministers were either sacked or resigned citing lack of democracy in the party.

During this period of uncertainty the rebels banded together. The BJP, which has 11 members in Arunachal Pradesh assembly, in the meanwhile asked for mid term polls, while extending support to the rebels. The BJP also declared that Chief Minister Nabam Tuki had lost confidence of the house and must prove his majority on the floor of the house. The session of the Assembly was planned on 14th January 2016. At this time, the rebels attempted to force a showdown with the government. However, the government acted quickly and had the State Assembly locked. Thus blocked in their endeavors, the rebels held their own session in a make shift venue, where, presided by the Deputy Speaker they counted 33 (some estimates suggest 46 members) members (20-congress rebels, 11 BJP, 2 others) and passed a resolution to oust Arunachal Pradesh Assembly speaker, Nabam Rebia and censure Chief Minister Nabam Tuki. Amidst all this, Arunachal Pradesh Governor, Jyoti Prasad Rajkhowa, advanced the date of the session of Arunachal Pradesh Assembly to 14th December 2015 and also directed the house to consider a motion to replace the speaker. Understandably, there was an outcry and the Gauhati High Court stepped in, staying all actions of the Assembly till 2nd February 2016. During this time, conspiracy theories around BJP trying all means at its disposal to form its first government in North East started emerging. Union Home Minister for State for Home Affairs, Kiren Rijiju, who is an MP from Arunachal Pradesh was also implicated by conspiracy theorists.

The Central government has now stepped in asking for the State to be put under President’s rule. This, at a time, when the matter is pending between Supreme Court. Opposition Parties have been quick to cry foul over the action of the Central Government.

Chances are that President Pranab Mukherjee will not easily approve the Central Government’s decision. Home Minister Rajnath Singh will be hauled over the coals, especially because Governor’s actions are widely viewed as being partisan. There is truth though in believing that the Governor was acting within his powers specified in the constitution. The Governor is free to call a sitting of the house, though he should be so advised by the Council of Ministers. The Governor can also send messages to the house as he wishes. Lastly, the Governor is free to exercise discretion, something which cannot be challenged in a court of law. BJP’s role however, in the crisis in Arunachal Pradesh is perplexing. While there is no doubt that the ‘rebels’ have BJP’s support, it is strange that BJP did not push for a no confidence motion. It appears that the Governor queered the pitch before that could be done. BJP’s role in fact raises more questions than answers. Irrespective of technicalities, the fact remains that the Congress party in Arunachal Pradesh faces a grave political crisis that is of its own doing. It may be prudent to allow President’s rule to be imposed in this sensitive border state which could be followed by fresh elections that result in the will of the people being reflected. Until then, only chaos awaits Arunachal Pradesh.

Don’t glorify those who commit suicide, don’t make martyrs out of them

Dear India, I love you. I love you unconditionally